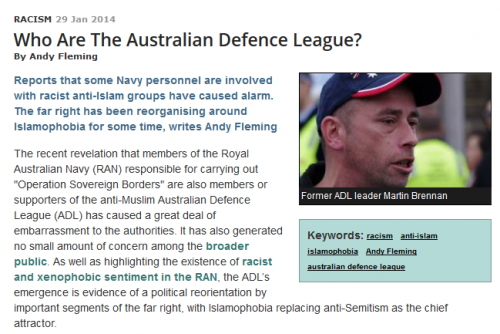 First, I published an article in New Matilda last week about the Australian Defence League.

Secondly, one of the groupuscules I referred to in the article, the Party for Freedom, was to have held a public meeting at Redfern Town Hall on Thursday, February 6, to discuss how awful Africans are. The Party has now transferred the venue to Humanist House in Chippendale.

According to Party Chairman Nicholas Hunter-Folkes — the man who believes Third World peoples, including Africans, ought to be sterilised so as to keep them from reproducing — leftists have forced management at the House to cancel the meeting. In addition, the Party’s website was allegedly subject to a DDOS attack on the weekend.

(Note that Humanist House was the subject of an unsuccessful coup attempt by neo-Nazis in 2010.)

Finally, four men were found guilty last week in a Perth court for distributing racist stickers promoting Combat 18 — stickers also being distributed by boneheads in Melbourne’s northern suburbs. One of the men convicted, Jacob Marshall Hort, was previously responsible for administering a Combat 18 website (terrormachine.net) and played in the band ‘Indigenous Hate’. In July 2010, Hort was convicted of criminal damage and discharging a firearm stemming from an incident in which several shots were fired at the Queens Park Suleymaniye Mosque, causing $15,000 damage.

Note that Hort & Co have been denounced by ‘Blood & Honour Australia’ (that faction aligned with the Hammerskins) as liars and traitors; his (former?) C18 comrade, Bradley Trappitt, has since been welcomed into the New Right/’national anarchist’ camp by its leader Welf Herfurth. What this means for relations between B&H/C18, B&H/SCHS, the New Right and Volksfront is unclear at this stage.

A HIGH Wycombe man was among four men fined a total of $8200 in Armadale Magistrates Court for placing racially motivated stickers across a number of Perth suburbs, including Midland and Glen Forrest.

Jacob Marshall Hort (27) and three other men, aged in their 20s and 30s, faced a total of 28 charges of criminal damage for posting the stickers on property, including shopping centres, rubbish bins, an ATM and car parking signs.

The WA police State security investigation group began an investigation into the group after a front-page report published in the Hills Gazette’s sister paper Midland-Kalamunda Reporter in February of last year.

The report detailed the stickers, which showed a swastika and a man clad in a balaclava with his arm in a nazi salute, together with website details, an email address and contact mobile phone number, had been placed on a City of Swan carpark sign, on The Avenue, asking residents to “support your local skinheads”.

The group was charged in August and September after an extensive police investigation.

Desmond Liddington (29), of Busselton, Jordan Richard Dyer (29), of Bunbury, and Toby Adam Middlecoat (39), of Carlisle, were also convicted, along with Hort.

A Westminster man (36) failed to appear in court and an arrest warrant has been issued.

PS. Oh yeah. A handful of members of the Australia First Party attempted to disrupt a march on Invasion Day in Brisbane.

I live in Melbourne, Australia. I like anarchy. I don't like nazis. I enjoy eating pizza and drinking beer. I barrack for the greatest football team on Earth: Collingwood Magpies. The 2021 premiership's a cakewalk for the good old Collingwood.
View all posts by @ndy →
This entry was posted in Anti-fascism and tagged antifa, antifa notes, Australian Defence League, Combat 18, Combat 18 Australia, Jacob Marshall Hort, Marshall Jacob Hort. Bookmark the permalink.