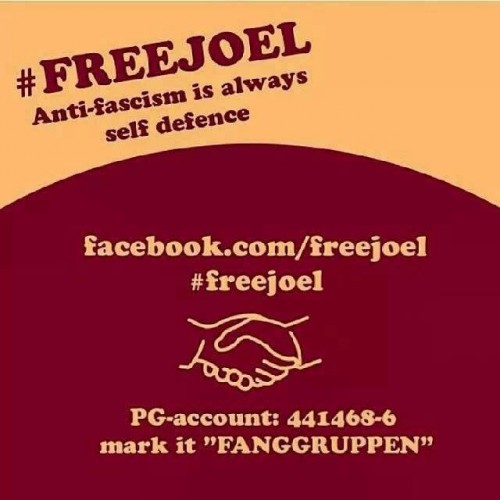 We, anti-fascists of Stockholm, call upon the international left-wing movement to show solidarity and support to one of our imprisoned comrades. He is in jail for defending a local community-organized anti-racist demonstration in the Kärrtorp area of Stockholm against a brutal nazi-attack on the 15th of December. Locals of all sorts, including parents with their children, elderly and youth, gathered in their neighbourhood to show strength against a nazi organisation that had been attacking local anti-racists and spreading nazi propaganda in schools in the area. They gathered in a peaceful protest when they were attacked by the most militant nazi group in Sweden with knives, sticks and glass bottles. Anti-fascists at the scene defended the local families from the attack and were injured themselves. One of the anti-fascists got arrested by the police a few days later although the anti-fascists did nothing but defend themselves.

A week later, on the 22nd of December, the largest manifestation in modern history in Sweden against racism and nazism took place in the same area. Around 20.000 people gathered with a clear message: Nazis are not welcome in our society!

Although the left-wing people of Stockholm showed strength we need your solidarity, your solidarity actions and your letters to our imprisoned comrade!

I live in Melbourne, Australia. I like anarchy. I don't like nazis. I enjoy eating pizza and drinking beer. I barrack for the greatest football team on Earth: Collingwood Magpies. The 2021 premiership's a cakewalk for the good old Collingwood.
View all posts by @ndy →
This entry was posted in Anti-fascism, Media and tagged #freejoel, antifa, Free Joel, Sweden. Bookmark the permalink.