Fascists, racists and various species of bigot — organised by fascist grouplet the United Patriots Front (UPF) — will once again descend on Bendigo next weekend (October 10) to put on a public display of stoopid (pissing and moaning about the construction of Bendigo’s mosque); once again there will be opposition. In this context of organised public expressions of Islamophobia and xenophobia, you can read moar about the feelings of some local Muslims in this (October 1) ABC report. The rally also comes on the heels of the successful disruption by anti-Muslim activists of a Bendigo council meeting of September 16 and the consequent cancellation of a meeting scheduled for this week.

Since their first rally (August 29) in Bendigo, the UPF — having already alienated Monika Evers (Reclaim Australia/Stop the Mosque in Bendigo) — appears to have lost the support of Bendigo local Julie Hoskin, the principal spokesperson for the anti-Muslim group ‘Rights For Bendigo Residents’. Judging by this report in The Australian (Bendigo’s anti-mosque leader fights lawyers for loan costs, Rachel Baxendale, October 1, 2015), Hoskin has enough on her plate and is a bit too busy to play second fiddle to some fascists from Melbourne. Of course, on the other hand, the shooting in Sydney on Friday will presumably inspire a few more UPF followers to take to the streets …

As for Reclaim Australia, it continues to be active online. And while it has notably won the fulsome support of maverick Queensland MP George Christensen, it remains a touchy subject for the government, as Government Spokesperson For Multicultural Affairs Declines To Criticise Reclaim Australia (Max Chalmers, New Matilda, October 2, 2015). And oh yeah : ‘In an effort to boost its coffers the anti-Islamic movement has started marketing a bizarre line of products’ (see : For The Racist Who Has Everything: Reclaim Australia Releases Clothing Line, Coffee Mugs, And Tote Bags, Max Chalmers, New Matilda, September 30, 2015). Note also : Geert Wilders’ Dutch anti-Muslim party forced to reveal US donor, The Electronic Intifada, September 29, 2015.

Speaking of firing up the troops, one tricksy patriot (I suspect someone involved in the Patriots Defence League of Australia) has produced a poster (below), with an unusual emphasis upon f*cking. The reaction to it is as could be imagined, so props, I guess, to the patriotik yoof what done it: Mission Accomplished. 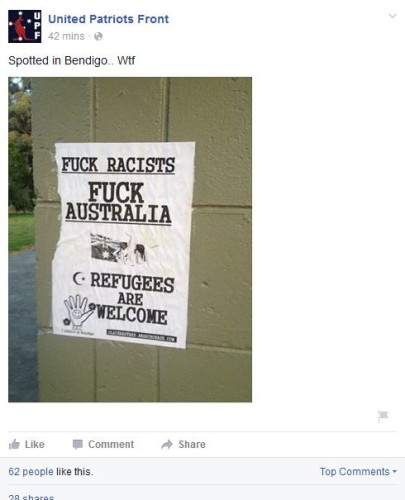 One of the other legacies of the August 29 rally is a $1200 fine being imposed upon an anti-fascist for burning an Australian flag. An appeal has been launched to help them pay the fine here. Finally, on a lighter note, True Australian Patriots mining racism for comedy gold (ABC Radio National, September 30, 2015).

The UPF’s Bendigo rally on October 10 is one of several (Hobart, Perth and possibly Canberra) expected to take place in Australia as part of a ‘global’ (read: Australia and the United States) movement. For further details on the US protests, see : Anti-Muslim protests—some armed—planned for at least 20 sites across the country, Kalia Abiade, Imagine2050, September 29, 2015. Jon Ritzheimer, the bloke responsible for promoting the concept, is featured in Arizona militiaman howls in rage after Oath Keepers back away from his possibly illegal plot to ‘arrest’ senator, Travis Gettys, RawStory, September 25, 2015.

Greek neo-Nazis Golden Dawn, whom the UPF regard as political allies, are on trial in Athens at the moment and a few days ago the mother of murdered rapper Pavlos Fyssas (Killah P) gave testimony [via Damian Mac Con Uladh /// GoldenDawnWatch]:

Pavlos was not in any political party. For years had been involved in music. His music was antifascist & antiracist. [Judge:] Did that get him into conflict with anyone? [Mom:] Pavlos’s girlfriend said there was no argument in place where they’d gone to watch a football match. Near place where they watched match, 20-strong group in black sweatshirts holding weapons gathered. Motorcycle police unit nearby. Pavlos and friends could see Golden Dawn one side & police the other. Intermediary came over and said don’t worry, I’ll sort it out. Pavlos: I’m not afraid, it’s my ‘hood. The 20 Golden Dawn who were already there were then joined by the Nikea hit squad. A car pulls up and a guy asks Pavlos and friends “where’s Kefalinias St?” We later learned that he [the guy in the car] was the murderer. Pavlos answered [guy in car]: This is it [the street] and the guy turned there. Then the whole gang of them, 50 in total, started approaching Pavlos and friends. They started to run and chase them. Pavlos told his friends to run. But Pavlos didn’t run. He was surrounded by 2-3 people so killer could come and stab him. I was told that he [killer] got out of the car and stabbed Pavlos twice in the heart. During incident Pavlos’ gf went to police at corner. They said: “We cannot intervene”. Police told Pavlos’ girlfiend that “nothing will happen, after two punches they’ll leave”. When two cops finally came over, it was already too late.

Some bloke in Ballarat was selling swastika merch at a market. In Melbourne, Ek Militaria in Essendon is a top place for Nazi memorabilia. As for Hitler, he liked to take drugs. Lots of them.

Finally, a new TV show is being produced based on the exciting anti-fascist adventures of The 43 Group, established in post-WWII E-E-England “with the unvarnished intent of, quite literally, beating British anti-semitic activists into submission. Among these soldiers, sailors and airmen would be a teenage former British Army private who was serving an apprenticeship as a hairdresser and went by the name of Vidal Sassoon.”

See also : The Darkness Before the Right, Park MacDougald, The Awl, September 28, 2015: “A right-wing politics for the coming century is taking shape. And it’s not slowing down.” | Mouthbreathing Machiavellis Dream of a Silicon Reich, Corey Pein, The Baffler, May 19, 2014.