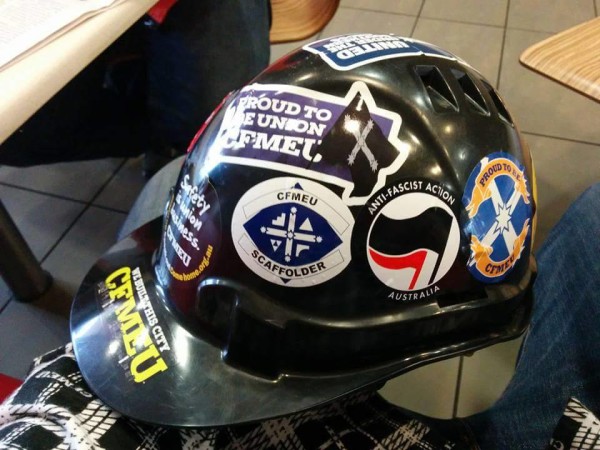 April 4 was the one-year anniversary of the first ‘Reclaim Australia’ rally. The occasion prompted me to write a few lines on my Facebook page (see below). Since then:

• Several members and/or close associates of the UPF — Ralph Cerminara, Blair Cottrell and Neil Erikson — have been nominated to appear in the Magistrates Court in Maryborough on Thursday, April 14, to respond to an application for an intervention order by a former associate, Joelle Norris. Whether Cottrell & Co appear or not would seem to depend on several factors. One is whether or not it has any impact on his parole conditions (if any). If so, he will likely appear to contest the order. It’s equally possible that Cottrell hasn’t been served with a notice of the hearing — but far less likely to have failed to notice its appearance on Facebook. Given his history of family violence, Cottrell would presumably be savvy enough to understand that if he fails to attend the hearing it will almost certainly be granted in Norris’s favour, meaning it’s very much in his interests to attend and to contest. Who knows? Hopefully he doesn’t bring an axe or a tomahawk along with him …

• Karen Street, the Tasmanian senatorial candidate for Kim Vuga’s ‘Australia Love or Leave’ party, did the same trick as the UPF at Bellerive Oval on Sunday, April 10. See : Hobart woman Karen Street stands by banner that got her ejected from Bellerive Oval, ABC, April 12, 2016.

• Also on April 10, around 20 or so flagwits belonging to Nick Folkes’ Party for Freedom gathered near the Halal Expo in Sydney. They shouted abusive slogans, waved placards for a while, and then went home.

• Dr Jim Saleam’s Australia First Party has lodged an application with the AEC to use the Eureka flag as its symbol on ballot papers (see : Australia First Party’s use of Eureka flag angers rebels’ descendants in Ballarat, Bridget Judd, ABC, April 12, 2016). The quest to appropriate the symbol is a long-running campaign of Dr Jim’s, dating back to the 1970s, and disputes over its status as an emblem of ‘left’ or ‘right’ has involved a wide range of historical and contemporary actors, from anarchist to neo-Nazi. Certainly, when the AFP joined fellow neo-Nazis from Golden Dawn at a public demonstration in Brisbane in May, 2014, they were rudely reminded that, as far as anti-fascist construction workers are concerned, the flag has no place in their hands. (Note that Jim Perren, one of the AFP dingbats present at the rally and co-author of the neo-Nazi ‘Whitelaw Towers’ blog, later helped arrange the UPF’s visit to Toowoomba in February.)

As a mobilising force, Reclaim Australia seems to have more-or-less disappeared up its own bottom: — widely understood as an essentially racist and xenophobic movement, met with sometimes fierce opposition on the streets, riven by internal conflict among the handful of dumbs and mads who constituted its core organisers, and in other ways eclipsed by the emergence (or re-emergence) of various other, largely online anti-Muslim projects, chief among them the UPF, RA appears spent. If so, RA will have become just one more of the already innumerable anti-Muslim propaganda pages FB happily carries and promotes. Of course, this may be a temporary retreat, and RA once again be the broad umbrella under which a liquorice all-sorts of anti-Muslim prejudice takes to the streets. Who knows? Barring some dramatic development, it does seem doubtful it will again stir as many suburban keyboard warriors as it did in 2015.

The UPF, which constituted itself as the vanguard of RA, is also barely a year old, and has obviously undergone some settling of contents during transit. As well as, first, the departure of Shermon Burgess and Neil Erikson from the UPF and, secondly, their denunciation of it as a ‘Nazi’ organisation, most recently Perth flunkey Dennis Huts declared that he was leaving the UPF — as much a man of his word, and his criminal convictions, as his fuehrer, he’s now back — while fellow sandgroper Nic Genovese has also elected to leave. Others to have ostensibly left the group’s inner circle include Kris0 Richardson, Linden Watson and John ‘Farma John’ Wilkinson. In any case, the UPF is now very much a vehicle for the political ambitions of local neo-Nazi Blair Cottrell and his sidekick Thomas Sewell (the football-hating, Hitler-loving pair carried the UPF banner at the Collingwood-Richmond match last week), with the financial support of Christian fundamentalist Chris Shortis, largely moral support from fellow Bible-basher Scott Moerland, and G*d knows what from the crazy, mixed-up Kevin Coombes (aka ‘Elijah Jacobson’ aka ‘Abdullah Islam’; Coombes was first a born-again Christian, then a Muslim, and is now a neo-Nazi sycophant).

Such, at least, is the UPF leadership. Around it has gathered a very small base of (generally quite demented) fanboys, chiefly from Bendigo, Melbourne and Perth, but also including a handful of neo-Nazis and other White supremacists from Queensland and elsewhere; Jim Perren of Whitelaw Towers/Anti-Antifa blog being one. While some have a developed political perspective, an emotional attachment to flags and other nationalist symbols, combined with a visceral hatred of Muslims and other racialised elements, typically eclipses any thoughtful or genuine political commitment. They are thus easily manipulated, lied to, and used — and are. Further, their commitment is just as often fleeting: — their naivete about politics, society and social change leading them to mistakenly believe both that their views are more popular than they are in reality and that acting like a racist dickhead in public is a surefire way to win friends and influence people.

(I should add that the UPF has little support in Sydney partly because its leadership is based in Melbourne but also because Sydney’s far right has already been colonised by Dr Jim Saleam’s Australia First Party on the one hand and Nick Folkes’ Party for Freedom on the other. The UPF has sought counsel from AFP but has not explicitly allied itself to it; Shortis has recently been playing with the PFF in Sydney but was noticeably absent — as was the UPF as a whole — from the PFF’s rare Melbourne excursion last weekend. Sydney is of course also home to Ralph Cerminara, an Australian Defence League activist and serial pest who was previously aligned with Shermon Burgess but is now singing from the UPF hymnbook. Now BFFs, the fact that Cottrell memorably described Cerminara as a ‘cancer’ — and late last year expressed a desire to travel to NSW in order to break the cancer’s jaw for some infraction — gives some insight into the highly unstable nature of the boys’ relationships.)

Of course, in addition to being a ‘street movement’, the UPF also fancies itself as a political party: ‘Fortitude’. Announced with much fanfare late last year in Perth, the UPF embarked upon an east coast tour to promote the fledgling party in February. The tour was not especially successful. Barely 40 or so attended its meeting in Orange, NSW, perhaps twice as many in Toowoomba, QLD (where organisation of the meeting was left in the hands of Catholic relief teacher Liz Carlsen, Perren, and a handful of QLD-based neo-Nazis), and several hundred in Bendigo. The attendance in Bendigo was the largest by far, but still far less than the UPF managed to attract at its peak, which in October last year was somewhere between 500 and 1,000. Further, despite now having over 40,000 likes on FB, it seems as though the UPF/Fortitude is still struggling to obtain the 500+ signatures required in order to register with the AEC (and, crucially, to contest elections under its own name on the ballot). The proximity of the next federal election also means that it’s now almost impossible for the party to do so — even if it did manage to collect the requisite total.

That’s not the only or biggest problem Fortitude faces, for it enters a field already crowded with radical and populist right-wing electoral alternatives, most notably the Australian Liberty Alliance and One Nation. The ALA in particular is a far slicker, well-funded, well-organised and generally palatable option for the anti-Muslim crowd than Fortitude, with its neo-Nazi leadership, criminal history, white nationalism and crude, racist outpourings. It seems possible that even if it does register, Fortitude will likely crash soon after launch, and the boys again be reduced to orchestrating publicity stunts and conducting closely chaperoned (and very small) police rallies. It will then find itself in a position to produce more characters like Phill Galea and Nathan Davidson: — and John Wilkinson’s public exhortation to ‘stop the mosques’ by burning them down will become a much more attractive proposition for its violent fanbase.

In April last year a page called “Slackc-nt” appeared on Facebook. It’s now been publicly disclosed that the author of the page is a man by the name of Andrew Wallis — AKA Drew Smith, Tommo Oro, et. al.. Wallis was also one of the five UPF meatheads — along with Blair Cottrell, Neil Erikson, Chris Shortis and Linden Watson — who paid a visit to 3CR Community Radio and the Melbourne Anarchist Club in November last year. 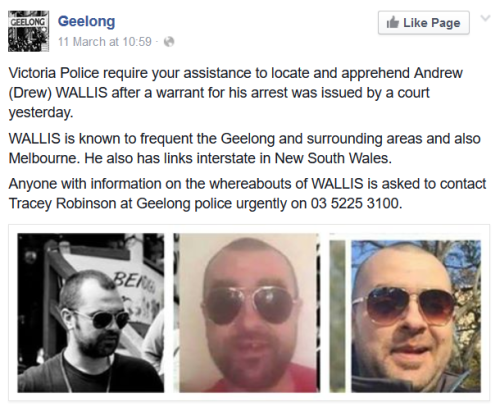 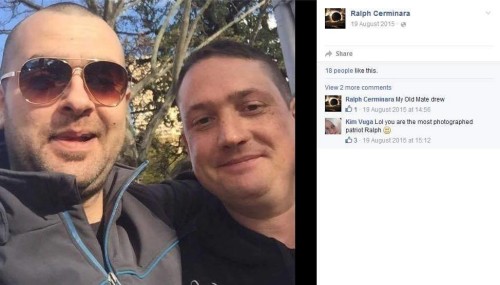