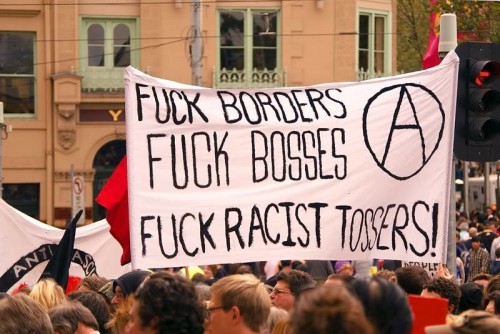 • on saturday (april 16), jura books (sydney) will be hosting a discussion w visiting academic alex prichard on the subject of ‘Anarchy, Freedom, and Constitutionalism’ : “How do you know when you’re free? Anarchists have usually said you’re free to the extent that you’re not dominated. But what secures this non-dominated state? Do we need to be empowered, or is something else needed?”

• a few weeks ago, the always-outrageous disaccords blog got name-dropped in a garbled account in the daily terrorgraph about folks in sydney wanting to ride the public transport system w/o paying. ‘Free Transport, Full Communism’: Cowardly vandals encourage attacks on rail staff screamed the headline (march 18, 2016).

• on april 23 in sydney there’s gonna be an Anarcho-Queer Solidarity Bloc to the Safe Schools Protest. Hell No to the Homophobic ACL!. on the subject of the acl, see : Gay Rights Is The New Nazism: Meet The Men Speaking With Scott Morrison At Christian Lobby Conference, Thom Mitchell and Max Chalmers, New Matilda, April 12, 2016 (There are “a lot of parallels” between the failures of church groups to resist Nazism in 1930s Germany and the growing acceptance among US Christians of liberalism in contemporary America – including towards issues of sexuality – according to the star attraction at this year’s Australian Christian Lobby conference).

• another blog worth taking a look at is insurrection news. a recent post invites readers to contribute to the establishment of a mobile infoshop in the Philippines: Support the Greenhouse Infoshop mobile library!

• in melbourne, anarchist affinity recently held a discussion on the subject of Social Anarchism, Individualism and Lifestyle Politics. aa will also be holding a Workplace Organising Skills 101 w/e workshop on april 23 and april 30, presented by two comrades from the FAU Berlin.

• in melbourne, may day this year happens to fall on a weekend (sunday, may 1). anarchists will be among those gathering outside trades hall for the occasion.

I live in Melbourne, Australia. I like anarchy. I don't like nazis. I enjoy eating pizza and drinking beer. I barrack for the greatest football team on Earth: Collingwood Magpies. The 2023 premiership's a cakewalk for the good old Collingwood.
View all posts by @ndy →
This entry was posted in Anarchism and tagged Alex Prichard, Anarchist Affinity, anarchist notes, ASF-IWA, disaccords, Hot Shots, Jura Books, May Day, May Day 2016, Perth Libertarians. Bookmark the permalink.