Reclaim Australia Does The Splits 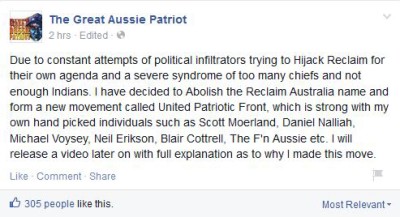 After several days of bitter internal disputes, Shermon Burgess (aka ‘The Great Aussie Patriot’) — the face of anti-Muslim movement ‘Reclaim Australia’ — has declared that ‘Reclaim Australia’ is dead and that a new organisation, called the ‘United Patriotic Front’, has been formed to take its place. According to Burgess, the UPF will initially consist of himself, local (Melbourne) fascist Blair Cottrell (aka ‘National Democratic Party of Australia’), local neo-Nazi and convicted anti-Semite Neil Erikson (aka ‘Nationalist Republican Guard’), deeply unpopular former ‘Rise Up Australia Party’ candidate (Queensland state election, Oxley, 2013) and semi-professional Islamophobe Scott Moerland, ‘Rise Up Australia Party’ leader and Christian fundamentalist Pastor Daniel Nalliah and a handful of other Facebook personalities. 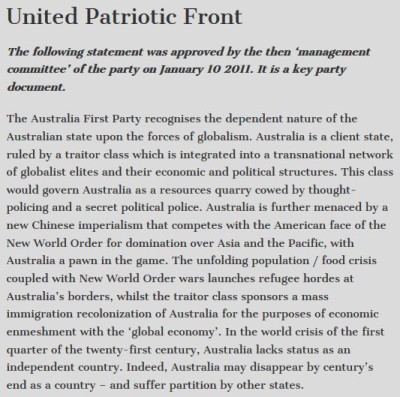 Perhaps the first thing that should be noted is that Dr James Saleam’s Australia First Party declared itself in favour of organising a ‘United Patriotic Front’ way back in January 2011. The concept was also invoked by Brisbane party member Aaron Heaps at the time of the ill-fated attempt by AFP to hold a rally in Brisbane in May 2014 in solidarity with the Greek neo-Nazi party Golden Dawn (the Golden Dawn leadership is currently on trial in Greece, accused of organising murders and a range of other violent crimes and of constituting a criminal organisation). (See : Australia’s Golden Dawn Rally Falls Embarrassingly Flat, Lauren Gillin, Vice, May 7, 2014.) 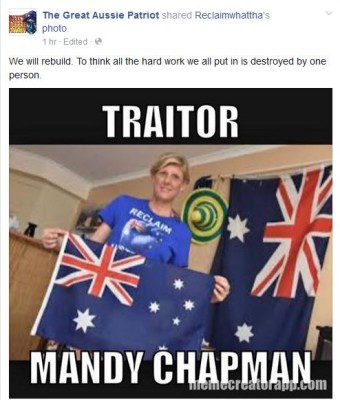 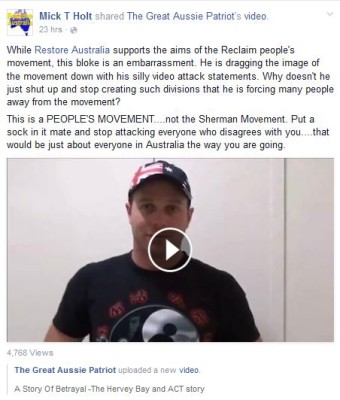 Secondly, Burgess’s dummy-spit follows declarations by the organisers of RA in Bunbury (WA), Canberra and Hervey Bay (QLD) to leave the RA fold, seemingly on the basis of either: a) resentment at the lack of consultation from the RA committee and/or; b) an unwillingness to promote RA merch on account of the fact that it’s produced in Bangladesh (a Muslim country). It also follows upon the denunciation of Burgess by Mike Holt (aka ‘Restore Australia’) as a public embarrassment, due in part to his attacks upon individuals associated with RA in Hervey Bay and elsewhere as ‘traitors’.

Thirdly, Burgess has registered the name ‘Reclaim Australia Rallies’ with ASIC while Monika Evers (of ‘Stop the Mosque in Bendigo’ fame) apparently retains copyright of the RA logo. As a result, both are presumably in a position to determine who else can employ the name and logo in order to conduct and to promote anti-Muslim activity.

Fourthly, a coalition comprising neo-Nazis, fascists and Christian fundamentalists — united only by a shared hatred of Muslims and a mawkishly sentimental nationalism — is an inherently unstable one, and it would be surprising to see it last long. Nalliah himself claims both that God speaks to him and that, more notoriously perhaps, the Victorian bushfires of 2009 — which killed 173 people — were God’s punishment for the Victorian state government’s decision to decriminalise abortion. The coalition functioned tolerably well on April 4, when Nalliah’s followers in Melbourne were joined by neo-Nazis and a host of other Islamophobes, but seems unlikely to have much of a future beyond this. Then again …

Finally, Burgess’s decision to form a Front may also be evidence of a determination to form a network that is more solidly based on a radical, right-wing agenda. The rally organised by local fascists to take place at Richmond Town Hall on May 31 will provide some indication of the ability of the Front to mobilise against the ‘communist traitors’ it believes infests local councils (Stephen Jolly, a member of the Socialist Party, is the councillor for Langridge Ward), as well as the appeal of explicitly ‘anti-leftist’ political activity.

What do you think?

8 Responses to Reclaim Australia Does The Splits