Who are the United Patriots Front?

As noted previously, Shermon Burgess (‘The Great Aussie Patriot’) has abandoned ‘Reclaim Australia’ to establish a new organisation called the ‘United Patriots Front’ (UPF). In essence, the UPF is a coalition of neo-Nazis, fundamentalist Christians belonging to the Rise Up Australia Party (RUAP), and a handful of semi-pro Islamophobes. 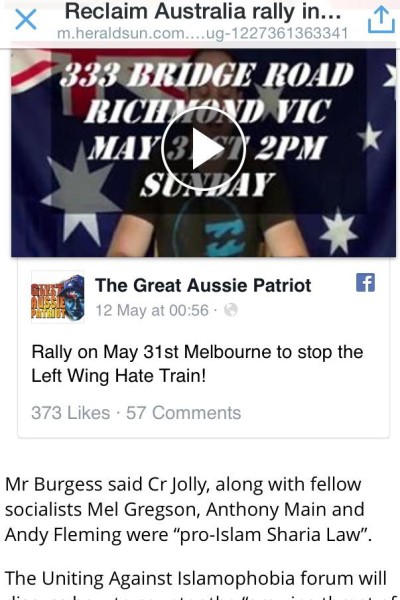 The UPF’s first excursion into the public domain will be on May 31, when it and assorted other neo-Nazis, fascists, racists and Islamophobes will be protesting outside Richmond Town Hall (see : Former Reclaim Australia member to hold rally in Richmond on May 31, Toby Prime, Melbourne Leader, May 20, 2105) because a socialist (Stephen Jolly) is on Yarra Council and because socialists (‘the left’) are understood to be in league with Muslims to destroy Australia.

The UPF got off to a slightly rocky start: having appropriated an image produced by Australian Geographic to promote the Front, the magazine promptly informed the motley crew that this was a copyright violation (to which at this stage there has been no response).

The two principal neo-Nazis belonging to the leadership of the UPF are Neil Erikson (‘Nationalist Republican Guard’) and Blair Cottrell (‘National Democratic Party of Australia’). Erikson has a criminal conviction for harassing a rabbi and has otherwise been active with the (now defunct) ‘European Australian Civil Rights League’ and ‘Nationalist Alternative’, as well as having attended neo-Nazi gigs organised by Blood & Honour and the Southern Cross Hammerskins, met with Canadian Holocaust denialist Paul Fromm during his tour here in late 2010 and attended various anti-Muslim protests in the company of other neo-Nazis.

Blair Cottrell is a relative newcomer, though he has been very active online in the last few years, expressing vile misogyny, a hatred of Jews and a love of Hitler, recommending that all Australian school children should be forced to read Mein Kampf at least once a year. 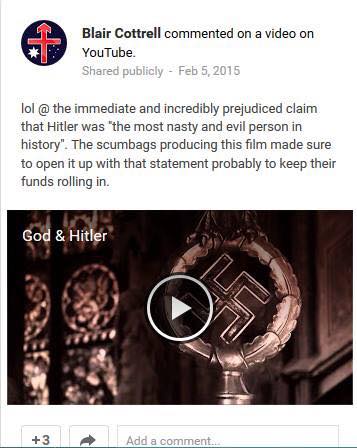 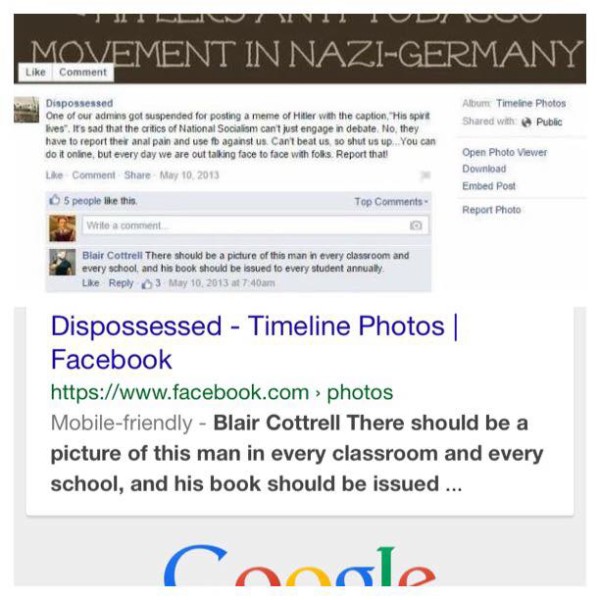 Like Burgess, Cottrell has made some effort to rewrite his history, deleting his commentary upon the Facebook page ‘Dispossessed’ (a repository of Nazi revisionist history and White supremacist ideology), on YouTube and elsewhere. In this context, it’s worth noting that none of Burgess’s followers have expressed any misgivings regarding the involvement of neo-Nazis in his political projects, a fact amusingly echoed by Pastor Danny Nalliah (who has happily joined Burgess in the UPF) when he made the transparently absurd claim that the several dozen neo-Nazis who attended the Reclaim Australia rally in Melbourne on April 4 — in his version, there was one — were planted by the Socialist Alliance(!):

The leader of the Rise Up Australia party has accused left wing groups of “planting” neo-Nazi protesters at Saturday’s controversial Reclaim Australia rally at Federation Square.

Danny Nalliah, one of the key speakers at the rally, told Tom Elliott he would not have been a part of the event had he known otherwise.

Photos of a man with a swastika tattooed to his head went viral following the event, leading many to brand the protest racist and fascist.

“The guy who came in was an implant, possibly by the Socialist Alliance,” Mr Nalliah said on 3AW Drive.

“Because the guys who organised the rally told every single person for three months that this was going to be a peaceful rally.

Can neo-Nazism and fundamentalist Christianity get along? Time will tell.

15 Responses to Who are the United Patriots Front?