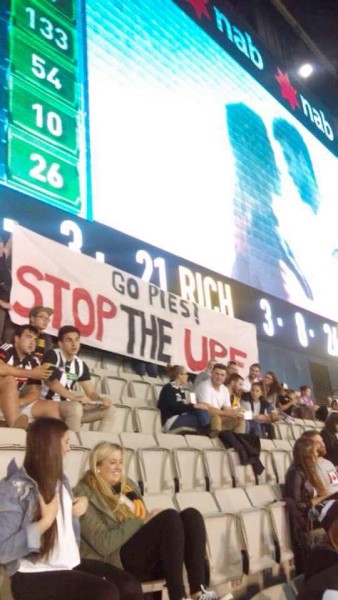 The neo-Nazi grouplet United Patriots Front (UPF) staged a(nother) provocative little stunt on Friday night, unfurling a banner reading ‘Go Pies’ and ‘Stop the Mosques’ at the Collingwood-Richmond match. After a short while, MCG security removed the banner and ejected those responsible — which included UPF fuehrer Blair Cottrell — from the ground.

The UPF have staged a series of publicity stunts since forming in April/May 2015. These include an ‘anti-Communist’ rally in Richmond (May 2015), roasting a pig outside the ABC offices in Melbourne (June 2015), beheading a dummy outside Bendigo council offices (October 2015) and being uninvited guests at the Melbourne Anarchist Club and community radio station 3CR (November 2015) — while trying to hunt me down.

The Collingwood stunt attracted a good deal of attention for the grouplet, and while it was denounced by the AFL, Collingwood, Richmond and many others — including, of course, many Collingwood supporters — it earned Cottrell another opportunity to appear in the media and to promote the UPF: the purpose of this and previous stunts. Further, the media is loathe to describe the UPF accurately, and the group is variously termed as ‘nationalist’ and ‘far right’ — but never neo-Nazi.

In any case, fair play to the UPF: the stunt was successful, and Collingwood’s statement that if it’s ‘established that [Cottrell & Co] have a formal connection to the club, this connection will be severed’ means little to a man who loves Hitler and hates Collingwood.

Finally, a few months ago Cottrell declared that the UPF would be staging a commemorative rally this weekend to celebrate the one-year anniversary of the April 4 Reclaim Australia rally. It looks like this plan has been shelved, but an anti-fascist gathering will be taking place at Fed Square in any event. 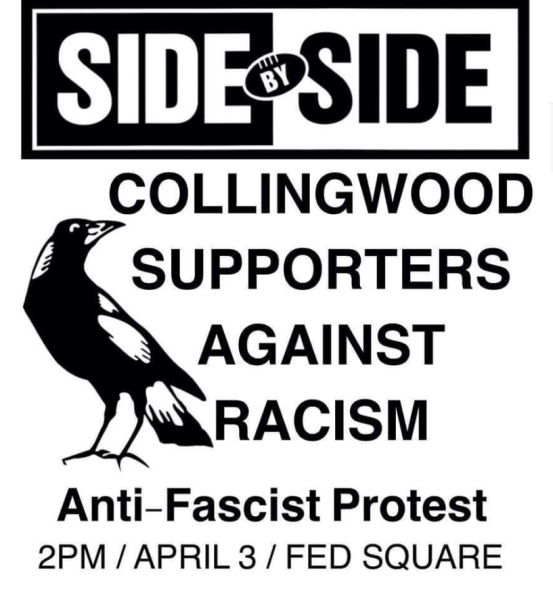 I live in Melbourne, Australia. I like anarchy. I don't like nazis. I enjoy eating pizza and drinking beer. I barrack for the greatest football team on Earth: Collingwood Magpies. The 2021 premiership's a cakewalk for the good old Collingwood.
View all posts by @ndy →
This entry was posted in Anti-fascism, Collingwood, State / Politics and tagged Blair Cottrell, Collingwood, Collingwood Magpies, Reclaim Australia, United Patriots Front. Bookmark the permalink.

1 Response to #UnitedPatriotsFront ~versus~ #Collingwood