Today in Bendigo, around 2-300 patriots/fascists answered their fuehrer’s call and attended the third and final leg of the United Patriot Front’s whirlwind tour of the ‘east coast’. There they were treated to another of Blair Cottrell’s best Hitler impersonations, whinged and whined about bloody Muslims, and (presumably) joined the UPF’s yet-to-be-registered political party, ‘Fortitude’. (The previous week in Orange, NSW saw around 40 or so gather at the local bowls club and the week before that around 70-80 attended the UPF meeting in Toowoomba, QLD.) The Bendigo Action Collective (BAC) held a ‘March Against Fascism & Bigotry’ which attracted anywhere from 50 to 100 or more in opposition to the fascist group’s presence in town.

The day appears to have been largely uneventful, though towards the end of the BAC march, outside the Bendigo railway station, a small group of a dozen or more UPF supporters — consisting largely of members of a tiny yoof gang from Melbourne calling themselves the ‘True Blue Crew’ — gave it large and were subsequently told to shoo by police. (You may remember the TBC from such rallies as ‘Reclaim Australia’ in Melbourne on July 18, when three of their members were arrested by police for being naughty and subsequently fined: the fines being paid for by the UPF.) Curiously, joining the TBC was (ex-?)UPF stalwart Linden Watson and Ralph ‘Valour Thief’ Cerminara, a man memorably described by UPF fuehrer (Blair Cottrell) last year as a ‘cancer’, a ‘virus’, and as someone who ‘infects’ and ‘destroys’ everything he touches.

• The 2-300 UPF supporters who attended today were dwarfed by the crowd of anywhere from 500 to as many as 1,000 who attended the last time the UPF was in town (October 10), which may suggest that the UPF is declining in appeal. On the other hand, their numbers last time were considerably boosted by the presence of Christian fundamentalists from the ‘Rise Up Australia Party’, the period between October and February has witnessed a series of ruptures in the UPF, and the mosque appears to be going ahead despite numerous legal challenges to its construction …

• The UPF’s Perth leader, Dennis Huts — best known for being an uninvited guest at Muslim prayer rooms in hospitals and universities — has declared that he’s leaving the UPF (and public activism). This presumably leaves fascist thug Elijah Jacobson as Cottrell’s subordinate in Perth. Below is a discussion taken from the UPF’s internal discussions on Facebook, in which the boys discuss the virtues of the stillborn ‘Generation Identity: Australia’ project, now re-named ‘Australians Resistance Movement’. 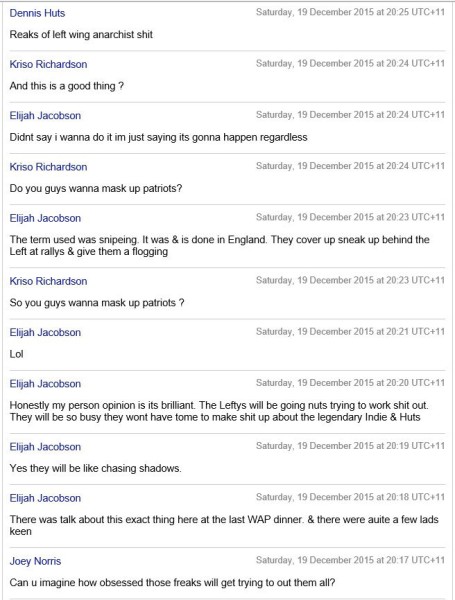 • Finally, the UPF has a tiny presence in Tasmania too. Well, of sorts. Their bizarre/disturbing batshit has been documented by anti-fascists in that part of the world in ‘We got chatting a while ago …’ (Antifa Tasmania, February 27, 2016).