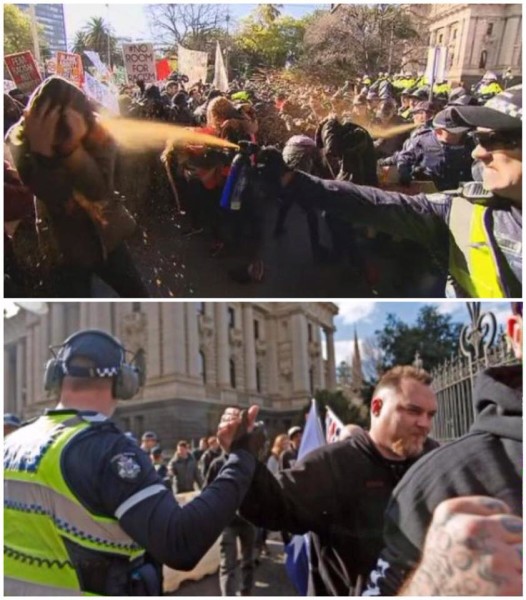 I thought I may as well post a few thoughts on today’s events here.

To begin with, I think it was noteworthy that the numbers attending the ‘Reclaim Australia’ rally — scheduled for 11am — were down on April 4 by a considerable margin. By my estimate, there were no more than 100 or so who managed to attend the rally and the speeches by Danny Nalliah and Christine Sindt Rosalie Crestani were largely drowned out by counter-protesters.

As for the ‘United Patriots Front’, like the Reclaimers they snuck into the area in front of Parliament accompanied by a massive police presence but didn’t stay long, being escorted by police away from the area by around 1.30pm. Presumably, this will be counted as a victory by the fascists, but only about 50 or 60 attended the UPF rally and a large number of these were seemingly from Sydney or interstate.

Regarding the policing of the event, the authorities did a reasonably effective job of ensuring that the motley assortment of bigots attending either or both rallies did so relatively unmolested. This was not the case with several score of their supporters, who were forced to attempt to break the picket lines (at the top of Bourke Street and near the corner of Little Bourke and Spring Streets) to gain access. Over the course of the four hours or so the rallies were taking place (between roughly 10am and 2pm), one or more ‘patriots’ would periodically attempt to break the picket, almost always being repelled.

These attempts to break the picket — especially that near Little Bourke and Spring Streets — sometimes triggered a reaction by police, who on several occasions forcibly disrupted the picket and also employed pepper spray in a somewhat chaotic fashion. Scores of counter-protesters required medical attention as a result. The Melbourne Street Medics — who deserve mAAAd props for their valuable work — describe these events as follows:

Today, antifascist protesters converged upon Spring Street in Melbourne near the Parliament of Victoria. They went there to counter racist rallies being held by Reclaim Australia and the fascist United Patriots Front.

As usual Victoria Police was also in attendance, and in the days leading to the protest it had promised a large presence and random weapons checks in response to rumours of fascists bringing weapons and intending violence.

Victoria Police’s goal for the day was to facilitate Reclaim Australia and the United Patriots Front holding their rallies out the front of Parliament House. In order to achieve this mounted officers and members of the Public Order Response Team (PORT) complemented uniformed officers on the streets, and OC (Pepper) spray was deployed against counter-protesters.

Amongst those affected by the OC Spray was a casualty who began to experience respiratory distress, a not uncommon side-effect of OC spray and other such “less-than-lethal” chemical weapons. In the course of attending to this casualty and decontaminating others who had been affected, members of the Melbourne Street Medic Collective (including one pregnant woman) were attacked by police with OC Spray and kettled in a small space at the top of Little Bourke Street.

Footage of the incident will be reviewed as it becomes available but at this point there seem to be only two explanations for the deployment of chemical weapons against the Street Medics: some witness reports have indicated that Victoria Police officers were spraying the crowd indiscriminately and did not check who they were attacking until after the fact. Others have said that police ignored the shouts of the crowd advising them that someone was receiving medical attention and with the decision to spray all medics this action should be seen as a deliberate attack upon medical personnel and their treatment space.

As one of our medics has since remarked:

“Possibly more than 100 people needed to be treated today as police indiscriminately fired pepper spray into the crowd, including onto an injured man who was struggling to breathe, was losing consciousness, and was awaiting an ambulance. They also sprayed the medics treating him. Someone had a seizure, two were taken to hospital and a few were sent home (by us as medics) due to the after-effects of the pepper spray (namely hypothermia-like symptoms of shaking and an inability to normalise body temperature). It was absolute fucking carnage and it was completely unnecessary and provocative. The racists didn’t cop any of the pepper spray at all as far as I know, and they got a three-line police escort away from the area.”

Victoria Police should rightfully be condemned for the deployment of chemical weapons, the targeting of medical personnel, casualties and medical treatment spaces with such weapons and, most of all, doing this in order to facilitate a public rally of racists and overt fascists and neo-nazis. Any assessment of the actions of antifascist protesters will conclude that they were inherently defensive: against threats of violence and the use of weapons by fascists and nazis as part of the United Patriots Front, and against the violence of racism and systematic oppression on the parts of Reclaim Australia, the United Patriots Front and Victoria Police.

The officers in command of PORT and of the event should immediately be suspended from their duties and investigations launched into how and why chemical weapons came to be used, and used against medics, injured persons and in treatment spaces. These investigations should be conducted with the possibility of demotion, termination from employment and/or laying of criminal charges (such as for assault) as outcomes.

The police account of the day’s events is recapitulated by The Age in Police condemn violence as protesters clash at Parliament House (Chris Vedelago, Deborah Gough, July 18, 2015).

• The hatriot bus from Sydney initially included both Shermon Burgess, Ralph Cerminara and Ross ‘The Skull’ May (along with members of Squadron 88 and the Australia First Party). After it was made public, the hatriots made a show of kicking poor old Ross off the bus.
• A small group of Burgess’s minders attempted to attack anti-fascists today but were unsuccessful (to put it mildly).
• There were a small number of arrests.
• The police are obviously committed to facilitating Reclaim and UPF rallies and to use some indiscriminate forms of violence to do so.
• A handful of neo-Nazis attended the protest, including Glenn Anderson/Androvski and Felicity Sharpe (of her, more later). Diane Teasdale, the former President of the Australia First Party, was present, as was fascist meathead Daniel Jones. There were of course a range of other fascists present but their identification will come later.
• It will be interesting to see if the UPF can bounce back from their second humiliating failure in Melbourne, or if the boys will instead simply drift away (as have so many similar such extreme-right projects in the past).
• Melbourne has re-affirmed its status as a city which is able and willing to combat public expressions of racial hatred, religious vilification and fascist politics.
• I was informed today that ‘The Great Aussie Patriot’ has: a) joined the ranks of the jobless and; b) moved to Sydney.
• Finally, many thanks to all the folks who attended the counter-rally: you rock my world!

I live in Melbourne, Australia. I like anarchy. I don't like nazis. I enjoy eating pizza and drinking beer. I barrack for the greatest football team on Earth: Collingwood Magpies. The 2023 premiership's a cakewalk for the good old Collingwood.
View all posts by @ndy →
This entry was posted in Anti-fascism and tagged Australia First Party, Danny Nalliah, Diane Teasdale, Glenn Anderson, Reclaim Australia, Rosalie Crestani, Shermon Burgess, The Great Aussie Patriot, United Patriots Front. Bookmark the permalink.