1) Things kick off early in Melbourne, with counter-rallies being called for 10am ahead of the Reclaim Australia rally at 11am and the United Patriots Front (UPF) rally at 1pm. See : RALLY AGAINST RACISM – Stop ‘Reclaim Australia’ – Melbourne /// Melbourne Counter-Rally Against racism, Islamophobia and the far right.

If you’re coming out to join the protests tomorrow — and I hope all my readers in Melbourne do — please take care of yourself … aaand each other. 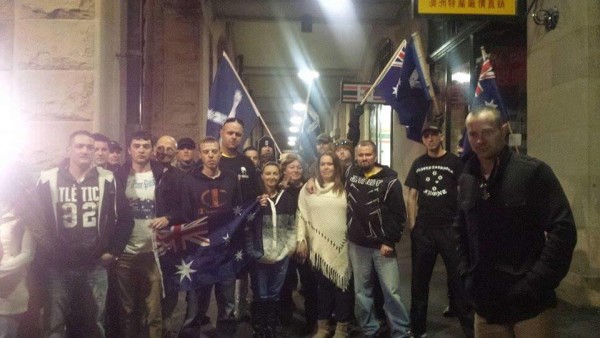 The hate bus from Sydney has left. It’s half-full and includes both Shermon Burgess and — as a special SURPRISE MOTHERFUCKERS! guest — one of Australia’s most notorious neo-Nazis, Ross ‘The Skull’ May, along with a complement of Squadron 88 and Australia First Party members.

You can download a copy of a neat li’l zine on the far right zine (readable) and zine (printable).

• There’s been some reportage on Reclaim and the (UPF) and inter alia some attention is being paid to the fact that a Tory MP, George Christensen, will be addressing Reclaimers in Mackay. It’s unusual for an MP to address a gathering of racists and fascists of this sort, though Tory MPs do occasionally address and have addressed meetings of the Australian League of Rights and Ustasha mobs. Typically, if drawn to public attention, the MP protests ignorance and the matter is soon forgotten — only to be repeated some years later. Obviously, this is not the case with Christensen, who remains unapologetic for his commitment to joining those who wish to rid Australia of Muslims. Crikey (Abbott must pick a side on radicalisation, July 17, 2015):

Liberal National MP Greg Christensen has said he will attend a Reclaim Australia rally in Mackay on Saturday, one of a number of rallies planned around the country. Reclaim Australia is an odious and obsessive cult, focused on an imaginary “Islamisation” of Australia. The group urges discrimination against Muslims, spruiks bizarre theories of a secret “halal tax”, and has members who are — as a dissident member noted on ABC radio yesterday — “anti-Semitic and misogynist”.

Christensen is no stranger to controversy himself, and since he is a backbencher and likely to remain so, his determination to attend the rally may not be a huge problem for Tony Abbott per se. But it does show up the utter chaos of Abbott’s opportunistic positions on free speech and radicalisation.

On the one hand, this is a government that affirms the “right to be a bigot”. On the other, it treats radical and bigoted speech as a virus that promotes radicalisation and must be socially managed. Free speech is sacrosanct — except when it occurs unscripted on the ABC and exposes government ministers to scrutiny, at which point they are barred from appearing on it.

To ban ministers from appearing on the ABC is bad enough; to refuse to impose discipline on an MP for speaking on the platform of a noxious xenophobic group shows the hypocrisy in full.

There’s a long tradition of political parties guarding their boundaries by limiting where and with whom their members speak. If Tony Abbott and Warren Truss do not enforce this now then they are guilty not of liberalism, but of cowardice. They will have de facto painted Reclaim Australia as more “Australian” than the ABC.

Furthermore they will have established what many of us have long suspected: in the views of the Abbott government, “radicalisation” is something brown people do, and their speech can be treated as violence to be controlled. Meanwhile, free speech is a white thing, which must be protected.

We think free speech, including odious speech, from all speakers must be permitted — but it does not need to be endorsed, and this is yet another test of Tony Abbott’s character. Or what remains of it.

• James Gilhome has publicly denounced the United Patriots Front for being ‘racist’ and ‘violent’, further claiming that the UPF has conspired to bring weapons along to the rally tomorrow in Melbourne (presumably in order to, ah, further reinforce the patriotik message). See : Former Reclaim Australia member tells of feeling duped by far-right ‘patriots’, Clare Rawlinson, 774 ABC Melbourne, July 16, 2015 (and elsewhere). Note that Gilhome is also the person responsible for naming another person as the author of my blog. See : Anti-Islam rallies across the country this weekend could be violent, former right-wing organiser warns, Tom Nightingale, The World Today (ABC), July 17, 2015. 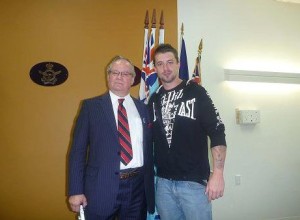 Above : Neil Erikson pictured with Canadian neo-Nazi and Holocaust denialist Paul Fromm during his tour Down Under in December 2010.

Neo-Nazis Blair Cottrell and Neil Erikson (UPF) have obtained some media coverage during the course of the week, in Cottrell’s case being invited on to 3AW to have a yarn with Neil Mitchell (Anti-Islam rally organiser cannot guarantee protest will be violence-free, July 17, 2015). Neil failed to ask Blair about the Holocaust or the Jews what run the world which is a pity I suppose, but pretty much par for the course. As for Erikson, he has rather comically denied authorship of a video in which he praises the neo-Nazi murder of 16yo Carlos Javier Palomino in Madrid in 2007 (‘Anti-Islamist’ rally organiser shown laughing at death footage, Herald Sun, July 17, 2015). Previously: Anti-racism protesters warned to stay away from anti-Islam rally, The Age, July 14, 2015.

I live in Melbourne, Australia. I like anarchy. I don't like nazis. I enjoy eating pizza and drinking beer. I barrack for the greatest football team on Earth: Collingwood Magpies. The 2021 premiership's a cakewalk for the good old Collingwood.
View all posts by @ndy →
This entry was posted in Anti-fascism and tagged Blair Cottrell, James Gilhome, Neil Erikson, Reclaim Australia, Shermon Burgess, United Patriots Front. Bookmark the permalink.