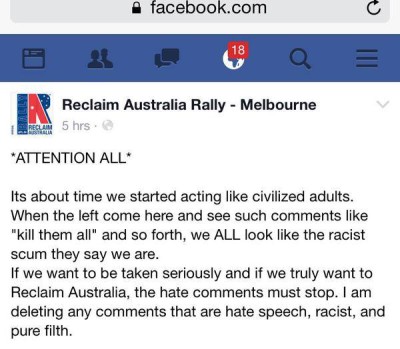 The main promoter of RA, Shermon Burgess (‘The Great Aussie Patriot’), has been busy working with the neo-Nazis of ‘Nationalist Republican Guard’ (NRG) to produce (increasingly bIzArRe) YouTube videos promoting the rallies and is otherwise doing his best to whip up anti-Muslim sentiment. Given the general political climate and the PM’s recent doubtful speech on national security, this is not a very difficult task and brings many dividends. See, for example : Muslim woman speaks out about attack on Sydney train, says she was targeted because of religion, Mohamed Taha, ABC, March 24, 2015.

As for ‘The Great Aussie Patriot’, as well as being active for several years as a member of the ‘Australian Defence League’, Burgess also wrote songs for his studio project ‘Eureka Brigade’ glorifying violence against Muslims and asylum seekers and praising the ADL’s leader Ralph Cerminara. Cerminara, along with teenage sidekick Zane Commins (19), lead an unsuccessful crusade to Lakemba in late December 2014, ending up being arrested and charged with affray and behaving in an offensive manner.

From the beginning of 2015, Burgess has been co-producing promotional videos for the rallies with members of a tiny neo-Nazi group called ‘Nationalist Republican Guard’ (NRG, est. January 2013). NRG evolved out of another tiny grouplet called ‘European Australian Civil Rights League’ (EARL) but was/is otherwise an extension of the Melbourne-based neo-Nazi group ‘Nationalist Alternative’ (NAlt).

NAlt underwent an acrimonious split midway thru last year and its leader publicly named and shamed by some of its unhappy campers as Mark Hootsen. Hootsen was also until that time one of two mods on ‘Stormfront Downunder’, one of the world’s leading neo-Nazi/White supremacist websites and home to many of Australia’s fascists (including of course the Australia First Party).

For a short period following the split, the NAlt Facebook page published a range of bizarre materials attacking the group’s former leader — it has since been closed and an alternative FB page published. NRG has a Facebook page here. Its last post, published on November 8, 2014, is a link to a ‘humourous’ video titled ‘Hitler approves of NRG’.

The naughty boys of NRG briefly came to public attention in February 2014 when one of its members, Neil Luke Erikson, was convicted of harrassing a local rabbi — though Erikson’s long history of neo-Nazi activism was AFAIK never a matter discussed in court. In passing sentence on Erikson:

Magistrate Donna Bakos said she had no doubt Erikson’s calls were motivated by prejudice and found he had little remorse for his crime. But she ignored prosecution pleas to jail Erikson, sentencing him instead to psychological assessment and treatment in the community. “There is no other explanation except that they were motivated by prejudice, if not hatred, toward the victim because of his race,” she told Erikson. “It is degrading. It is hurtful. It is not to be tolerated.” Erikson, of Heidelberg West, pleaded guilty in the Melbourne Magistrates Court to stalking Rabbi Gutnick over the calls made in December 2012 and January 2013. Erikson told a forensic psychologist after his arrest he had many “Aussie Aryan friends” whom he found more entertaining than his other mates. He also said the calls were made as a practical joke.

The fact that Burgess has hopped into bed with a convicted anti-Semite and neo-Nazis appears to have had precisely zero effect on his followers: they simply do not care, and neither does Burgess. Thus, while some of those who are happy to publicly express bitter hatred for Muslims also claim not to hate Jews, their sleazy alliances have not gone unnoticed and, I hope, will not go unchallenged either. 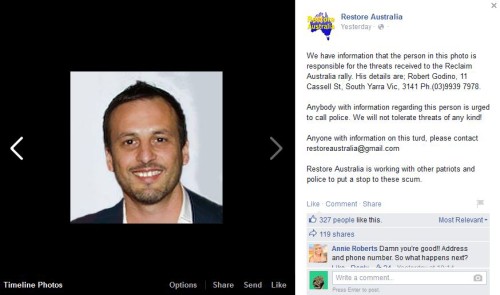 Last week James Richard Gilhome, a meatheaded fanboy of Burgess’s from Tasmania, claimed online to have determined that the author of this blog is a man by the name of Robert Godino. He’s wrogn, but the story has taken on a life of its own and now appears widely on social media, in particular on the Facebook page of Mike Holt’s bizarr0 ‘Restore Australia’ (By Getting Rid Of The Muslims). As well as describing Godino as “scum” and a “turd”, Holt accuses Godino of having engaged in criminal behavior (for which he has been reported to police). Asked if he had any concern over the potential problems Godino may face as a result as having been nominated in this fashion, Holt says ‘no’ and adds that he accepts full (legal, moral and political) responsibility for publishing Godino’s name, address, photo, email and claiming that he is the author of this blog. 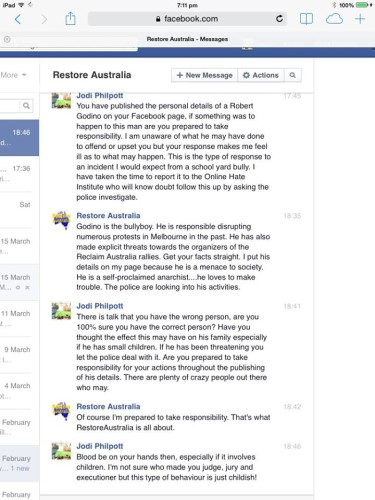 — a sample of some of the commentary appears below. 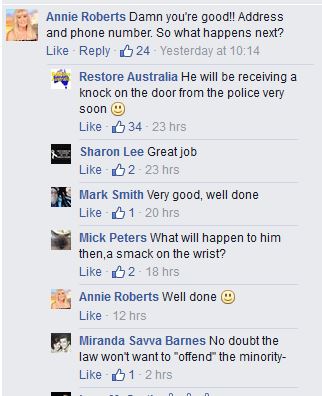 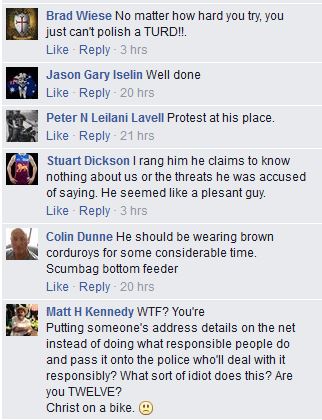 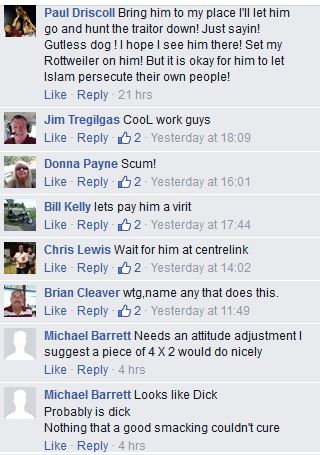 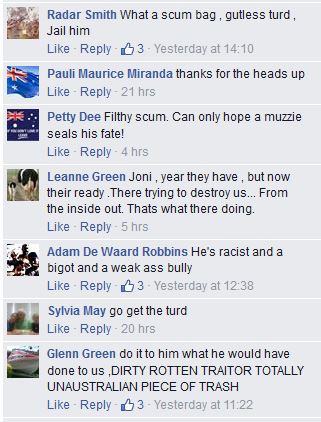 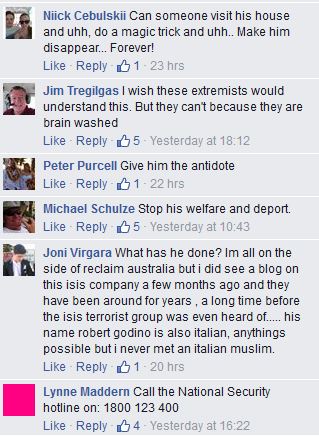 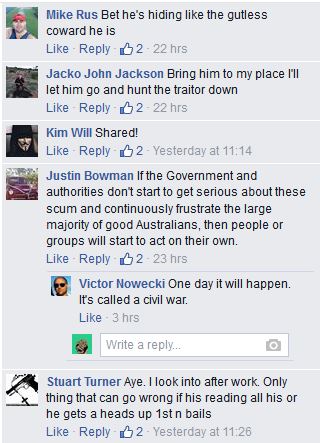 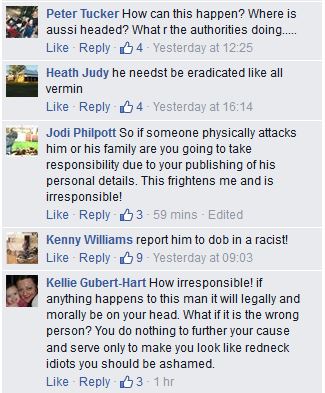 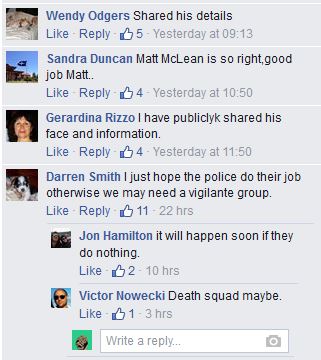 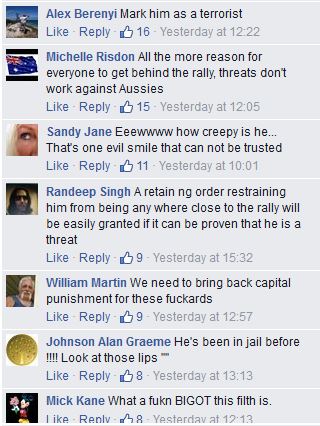 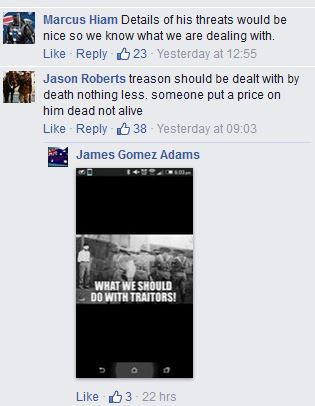 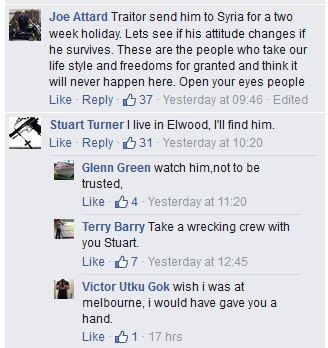 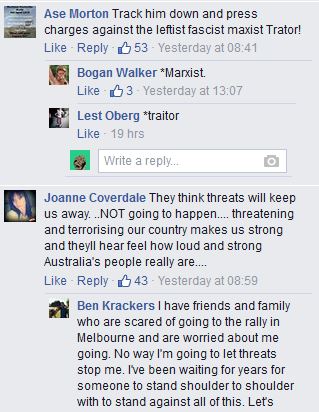 Right-wing Xtian homophobe Pastor Danny Nalliah is being joined by Bendigo councillor Elise Chapman at Reclaim Australia in Melbourne on April 4. You may remember Chapman from such tweets as ‘a disturbing image of babies with mutilated genitals’ sent ‘to a woman who supported a [mosque] development’ in Bendigo.

4BC radio has a piece on ‘Reclaim Australia’ starring Scott Moerland, a member of the Christian fundamentalist party ‘Rise Up Australia’ (RUAP). Moerland was RUAP’s candidate for the seat of Oxley at the 2013 federal election. He placed last of eight candidates, receiving 400 votes (0.53%). RUAP’s leader, Danny Nalliah, claims that God speaks to him and that the Victorian bushfires of early 2009 were God’s punishment for the state government liberalising abortion laws: Nalliah will be speaking at the Melbourne rally.