Yesterday afternoon, Ralph Cerminara declared on Twitter that he would be leading a crusade to Lakemba: 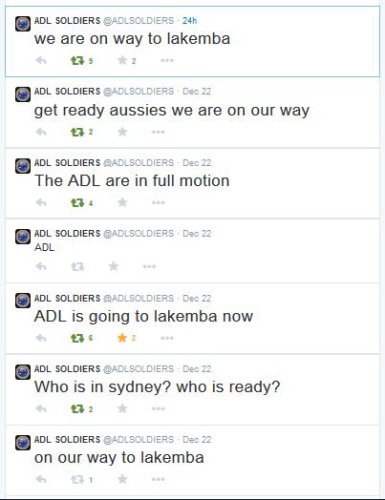 It didn’t go quite according to plan, however. After having been given a clip ’round the ears by angry locals, ADL führer Cerminara (36) and his teenybopper sidekick Zane Commins (19), have been charged with affray. Today the pair was refused bail: “In court this afternoon the pair was refused bail with Justice Les Brennan not mincing his words. The last thing this community needs bearing in mind what’s happened in recent days is boofheads like this stirring up a certain section of the community, Justice Brennan said.” According to one journalist, Magistrate Les Brennan told court ADL boss Cerminara said to police “an hour after I’m released, I’ll be in #Lakemba with 50 of my mates”.

Making Cerminara as accomplished a legal eagle as he is a political strategist.

(Q. Is Zane Commins the same Zane who filmed anti-racist protesters in Penrith on December 8? It seems likely but I can’t tell from the grainy footage uploaded thus far.)

I live in Melbourne, Australia. I like anarchy. I don't like nazis. I enjoy eating pizza and drinking beer. I barrack for the greatest football team on Earth: Collingwood Magpies. The 2021 premiership's a cakewalk for the good old Collingwood.
View all posts by @ndy →
This entry was posted in Anti-fascism, War on Terror and tagged Australian Defence League, Islamophobia, Lakemba, Ralph Cerminara, Zane Commins. Bookmark the permalink.