I thought I may as well provide a brief summary of the year in blogging + activism.

Before I do, a few days ago (December 30), I became aware that local neo-Nazi Neil Erikson had published a video on his Facebook page claiming that I am Monash academic Professor Rob Sparrow.

The video features Erikson, driving in his car, while watching a video on his phone of an exchange between Rob and other panelists on the subject of ‘political correctness’ (you can watch the video here). The convicted anti-Semite and neo-Nazi activist states:

That guy there [points at Rob]: his name is Doctor Robert Sparrow, Monash University. Now for the past ten years, patriotic and nationalist groups, have been fighting an enemy. An unseen enemy. This is the most cowardly of the pond scum of the left. He’s the king of the pond scum. Andy Fleming has spent over a decade, sitting on his little gay computer, taking down patriot’s photos of their children, of their houses, and storing it on his hard drive. Then he then spreads it to all the anarchists, around the local area, so the anarchists go and attack these people’s houses. He’s been blamed and accused of causing a fire bomb of a man, a patriot’s letterbox, a few years back. He’s even been behind the anarchist violence on April 4, July 18, May 31st, August 29. All that anarchist violence where they were bashing old women, desecrating war memorials, it all come from Andy Fleming. And that, my friends, is Andy Fleming: Doctor Robert Sparrow, the biggest fucking coward in our nation. So spread the word patriots, and let’s expose this piece of shit. Catch yas.

A short while later, the video was removed and Erikson uploaded another. Minus the criminal accusations above, it widens his, er, critique, to include Rob’s siblings, Jeff and Jill Sparrow. Titled ‘Slackbastard AKA Sparrow Family’ and published on December 30, Erikson states:

How you goin’ patriots? Well we discovered who slackbastard is, some guy named Robert Sparrow. Now he’s a lecturer, at university: he talks about anarchy, he’s all edgy and shit because he wears like loopy earrings, he teaches all the kids money’s bad, capitalism’s bad, [I’m?] edgy. Now that is slackbastard. We also found out who his brother is, Jeff Sparrow, who’s a edgy communist journalist. He writes for some shitty news agencies online like Overland and shit, so he’s like real edgy communist [indecipherable] … tell everyone how to spend their money. Not only that they gotta sister named Jill Sparrow, who’s a socialist and she started Socialist Alternative, in Melbourne. Now get this, if you watched the news a couple of months ago, some crazy woman was being dragged out of a government building by police, she had red hair, she had her child breastfeeding off her breast, screaming like a disheveled mess. That’s their sister Jill, she’s a socialist, she’s edgy too, they’ve been doing this since they were young. But guess what, they grew up in the most richest suburb in Victoria: Brighton. They’re spoiled little fuckin’ rich kids. When’s the left wing gonna learn, you gonna let these little spoiled, little spoiled brats tell you what to do with your cash? It’s disgusting. Have a happy new year, and fuck the left wing. Catch ya later. 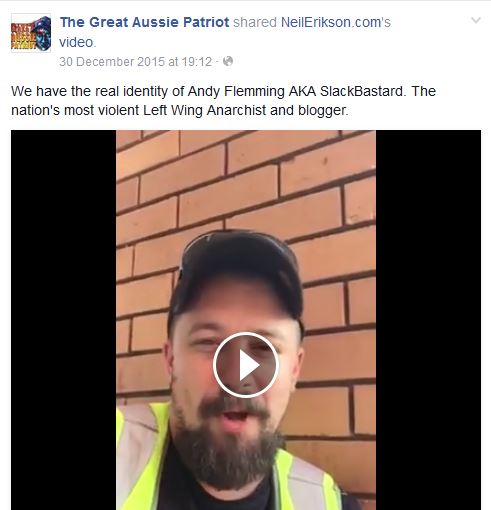 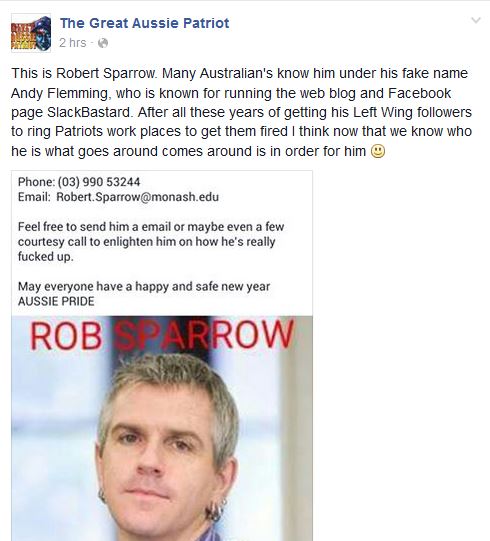 This second video has been spread widely among Erikson’s fascist comrades, including by Shermon Burgess (‘The Great Aussie Patriot’), while similar material — claiming that Professor Sparrow is the author of my blog — has appeared on neo-Nazi blogs like Whitelaw Towers, Nick Folkes’ Party for Freedom Facebook page, Facebook pages belonging to Dr Jim Saleam’s Australia First Party and presumably elsewhere. Accompanying the material is commentary of the sort one might expect: promises of bloody revenge, homophobic diatribes, commitments to harassing Monash University (several Facebook users admit to phoning Rob’s office and leaving abusive messages), a handful of skeptical inquiries, and so on. A sample: 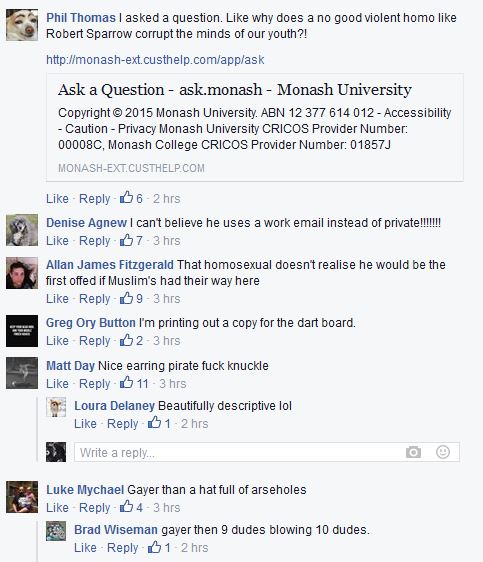 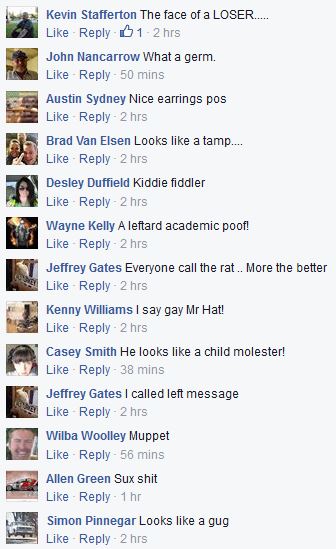 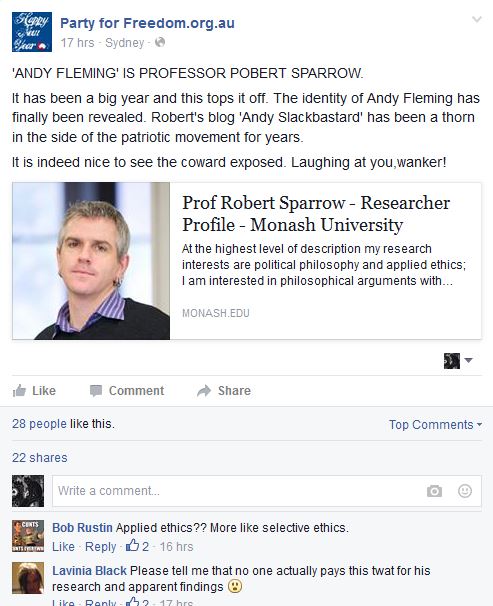 In that other place known as reality, this is obviously not the first time that some fascist bizarr0 has claimed to know my ‘real’ identity: in March last year James Gilhome claimed that I was some bloke called Robert Godino; the year before that, the Australia First Party & Co. alleged that I was James Hutchings (after the party received a letter from a lawyer, I suddenly became ‘Andy’ Hutchings, James’s non-existent brother). And so on and so forth.

In conclusion, despite the falsity of the claim, like previous such excursions, this latest ‘outing’ will likely take some weeks or even months to subside. In which context, it’s important to remember that Burgess’s 41,000+ Facebook followers are entirely gullible and will believe absolutely anything he says — and that Facebook is entirely happy to facilitate his racism, xenophobia, and general abuse of Muslims in Australia (see also : 2015: The year that angry won the internet, Mike Wendling, BBC, December 30, 2015). The same rule applies to the far fewer numbers who pay attention to the diatribes of Neil Erikson, the online poutings by the Australia First Party, and/or the assorted other fascist grouplets and random bigots that have volunteered to take up the cudgel against Professor Sparrow.