A review of my blogging efforts in 2015.

In addition to several notes on anti-fascism (which included some advice on Facebook use), I wrote about the ‘Rojava Revolution’ in northern Syria and a strike and occupation at a factory in Dandenong. Oh yeah: in January I also briefly appeared on an episode of The 7.30 Report about ‘citizen detectives’.

In February I began to chart the emergence of proto-fascist movement ‘Reclaim Australia’. I republished several (very interesting) articles from Le Monde Diplomatique on the Charlie Hebdo killings in Paris, took note of the #HESTAdivest campaign, and a controversy re protest, the Black Rose kolektiv and the (now sadly-departed) Indigenous activist Ray Jackson. I also republished an article by sociologist Ghassan Hage on Continuity and Change in Australian Racism and briefly noted some silly neo-Nazi shenanigans at the Melbourne Knights.

April witnessed the first of a series of national rallies organised under the umbrella of ‘Reclaim Australia’: I wrote several posts about the April 4 events and also published a few things elsewhere (New Matilda and Overland). On my monthly radio show on 3CR (with co-host and raconteur Cam Smith), we spoke to writer Van Badham about what it all meant and the importance of opposing fascist movements both online and on the streets.

Another month devoted to Reclaim Australia and the emergence of fascist splinter group the ‘United Patriots Front’ (UPF). Comprising a small assortment of local (Melbourne) neo-Nazis, fascists, and right-wing Christian fundamentalists, the UPF held its first, ‘anti-Communist’ rally in Richmond on May 31. The demo attracted around 60-70 or so supporters, a counter-demo several times that size and, while attracting considerable media and public attention, failed to unseat Stephen Jolly from his Yarra Council seat (or to occupy the steps of Richmond Town Hall — even with police assistance). The targeting of Jolly eventually culminated in the arrest and prosecution of a man for making rape and death threats against Jolly and his family. Oh yeah: after being briefly resurrected, my Facebook page was again closed down by an orchestrated campaign.

More on Reclaim Australia, the UPF and assorted fascist dregs. Also: Facebook; an abortive ‘debate’ on anarchism and anti-fascism; International Day of Solidarity with Antifascist Prisoners Saturday, July 25, 2015; mass murderer Dylann Roof’s ‘manifesto’ and; cranky-pants neo-conservatives at XYZ and their flirtations with fascism. Finally, the Victorian Trades Hall Council adopted a motion on Reclaim Australia and (in response to popular demand) I wrote a very brief guide to the contemporary Australian far right.

Another month devoted to Reclaim Australia et al (the second national rally took place on July 18). I also republished online commentary (now largely deleted) by UPF leader Blair Cottrell on his hatred of Jews, belief in anti-Semitic conspiracies, denial of the Holocaust, love of Adolf Hitler etc., and drew attention to a Kurdish solidemo in Sydney by local anarchists. [Note: None of the UPF’s followers have ever registered any objection to Cottrell’s neo-Nazi views.]

In August, the UPF transferred its activities from Melbourne to the rural Victorian town of Bendigo, where they were able to draw upon the support of a pre-existing grassroots campaign against the construction of a mosque (the town’s first). Their first (August 29) and subsequent rally in October were relatively large affairs, attracting hundreds, with opposition being split between the campaign ‘I Believe in Bendigo’ and the impromptu ‘Bendigo Action Coalition’. Margot Spalding of ‘I Believe’ was later featured on an episode of the ABC’s Australian Story.

Of particular note : Reclaim Australia, Shermon Burgess & violence … (August 5, 2015) — August was also when #OperationBorderForce was told to get. in. the. sea.

As the patriotik year dragged on, Reclaim Australia and UPF figurehead Shermon Burgess became increasingly batshit in his ideological pronouncements. Example: Q. Did Trotsky ‘invent’ the term ‘racist’ in 1927? (September 28, 2015). Also in September, AK Press announced that anarchist writer “Michael Schmidt is a white nationalist trying to infiltrate the anarchist movement.” (September 27, 2015) — the fallout from which is still developing.

While Nick Folkes and his ‘Party for Freedom’ began organising for a Cronulla riot re-enactment to celebrate the 10th anniversary of the anti-Muslim riot/White Civil Uprising in December 2005 (heavily promoted by Shermon Burgess — who failed to turn up to the court hearing intended to try and stop the re-enactment), the wheels began to fall off the UPF bandwagon. The rapidly unfolding drama revolved around Burgess’s decision to quit, then re-join, then again quit the UPF, while current UPF fuehrer Blair Cottrell memorably described Burgess’s #BFF (and valour thief) Ralph Cerminara (Australian Defence League) as a ‘cancer’ upon the patriotik movement. October 10 was the day of a farcical, ‘global’ (Australia and the United States) rally against Muslims. E-commerce cowboy Jon Ritzheimer led the charge on that occasion and has been most recently (January 2016) witnessed joining a clutch of other wingnuts in an occupation of a wildlife reserve in Oregon. (See also : I Studied Oregon’s Militia Movement. Here’s 5 Things You Need to Know, Spencer Sunshine, US Uncut, January 3, 2016.)

In November, along with the usual antifa notes, I republished an article from US anarchist journal Drunken Boat on the history of the concept of ‘decadence’ and a few things about the massacre in Paris. Reclaim Australia went to Melton and the UPF staged another awfully unsuccessful Little Big Day Out in Melbourne; I was also interviewed by Phillip Adams for Late Night Live.

• The last month has witnessed the consolidation of the UPF under the leadership of neo-Nazi Blair Cottrell. Burgess has left and has recently been joined by fascist meathead and chief UPF propagandist Neil Erikson (also accompanied by the usual Days of Our Lives drama). It’s uncertain at this stage if former ADF soldier Scott Moerland remains holding hands with the neo-Nazi mob in Melbourne, though it seems likely that Christian fun-da-mentalist Pastor Danny Nalliah will remain content to be wheeled out periodically at their public performances.

• The UPF has announced that it will be forming a political party with the God-awful title of ‘Fortitude’. To help promote the party the boys have organised an east coast tour, taking advantage of local anti-mosque and anti-Muslim campaigns in Toowoomba (Queensland), Orange (NSW) and Bendigo (Victoria). If the party registers it will face competition for the racist vote from the Australia First Party, Australian Liberty Alliance, One Nation Party, Party for Freedom, Rise Up Australia Party, and a clutch of other wEiRd0es.

• Last week, Erikson and others claimed to have discovered that I am in fact Monash University academic Professor Robert Sparrow. I’m not, but it will likely take some time before meatheads like Erikson, the UPF and other fascist bizarr0es realise their mistake.

And so it goes. That said … 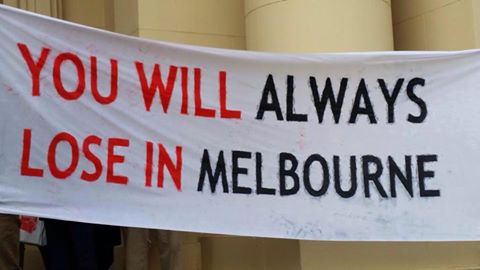