@GlenRHHW I reported what I saw. The anti-fas were gunning for a fight. The anti-Muzzie crew were smart enough not to get violent.

Yes, well: props to the “anti-Muzzie crew” I guess. In any case, the tsunami of racist violence that was promised by paranoid phantasists turned out to be a bit of a damp squib in the end: over 9,000 somewhere between 40 and 60 patriotik folks assembled at a BBQ in Cronulla today; a far cry from THE BIGGEST AUSSIE PRIDE RALLY THIS COUNTRY HAS EVER SEEN that was promised by galloping mythomaniac Shermon Burgess (aka ‘The Great Aussie Patriot’). 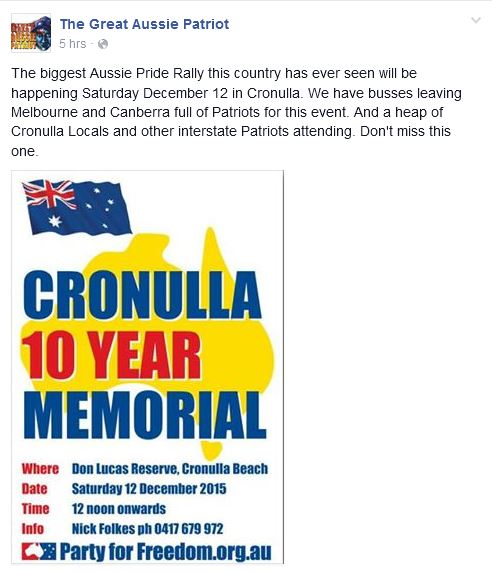 As for Burgess, he was a no-show. Further, his failure to attend court on Friday, as well as his failure to obey the court’s decision, means that he’s not only in contempt but will also have to pay costs. (On court battles, see : Cronulla ‘memorial’ rally organiser vows to attend site after courts ban event, Lisa Visentin, The Sydney Morning Herald, December 11, 2015 | Far right leader Nick Folkes agrees not to hold Cronulla riots memorial rally, Paul Farrell, The Guardian, December 11, 2015.)

Oh yeah: approximately 150 or so anti-fascists attended Cronulla today as well. There were two arrests: one of an Aboriginal man for allegedly swearing at police and that of another man for allegedly disturbing the peace. 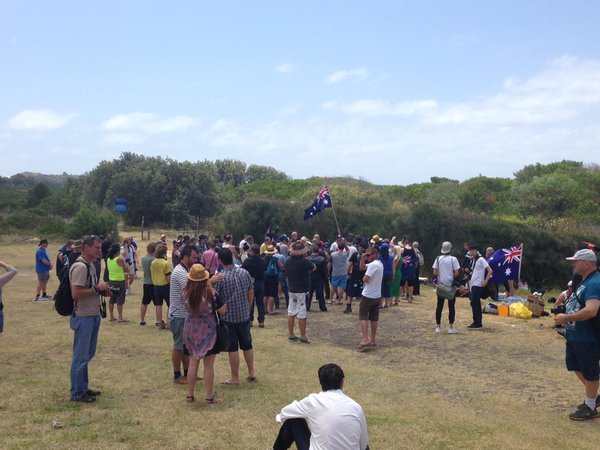 Dressed in black, faces covered, members of Antifa are the self-appointed enemies of the far-right.

During the protests and counter-protests that marked the 10-year anniversary of the Cronulla riots on Saturday, Antifa members carrying red, black and white flags emblazoned with the words Antifaschistische Aktion clashed with anti-Islam protesters.

A woman draped in an Australian flag was surrounded by 20 to 30 Antifa members who shouted at her to “take that fascist flag off now”.

Antifa, or anti-fascists, are a loose collection of socialists and anarchists, anti-racists and small-l liberals.

Antifaschistische Aktion is the name of a German anti-fascist organisation that reportedly has its roots in the German communist party in 1932, and was dissolved in 1933 by the Nazis and resurfaced in the 1980s in Europe as a response to resurgent right-wing groups.

Today the hard-left group is transnational, and part of hard-left common at the protests that usually mark G20 and other global leader summits in Europe.

In Australia members or self-professed members of the group have become an increasingly common sight at rallies organised to oppose the far-right protests held by groups like the United Patriots Front and Reclaim Australia.

Antifa Australia’s Facebook page has as its most recent post on November 17: “These deranged far-right scum want to damage society and bring everyone down. If the Authorities won’t stop hate speech, the leftist community will now need to implement their own authority via grassroots action.”

It describes itself as the “militant Left-Wing”, and in October wrote on Facebook that “a war … will break out in Cronulla when the far-right hold their rally”.

“We are one against the racists and their masters of the rich Australian ruling class,” the post read.

Antifa’s WordPress website lists its goals as opposing fascism, as well as to “defend the working class and their organisations from fascist attack”.

In keeping with the groups historical links to socialism, it also paints itself as anti-capitalist.

Members of Antifa in Australia have deliberately remained anonymous.

That’s despite attempts by opposing groups to out some of its most outspoken Australian advocates such as Andy Fleming, a pseudonym used by a Melbourne-based anti-fascist who runs a blog called slackbastard that tracks the far-right movement.

• In general, ‘antifa’ is simply an umbrella (generic) term used to describe a variety of ‘anti-fascist’ actions, projects and organisations. In Australia, antifascist activism extends back to the 1920s and the various struggles between fascist and anti-fascist groups within the Italian diaspora. When WWII broke out, many Italians were interned. One of those interned was Francesco Fantin, an anarchist and active anti-fascist. He was murdered by fascists at Loveday internment camp in South Australia on November 16, 1942. See also : The Proletarian migrants: Fascism and Italian Anarchists in Australia | The Faber Fantin Research Project Site.

• The German KPD was one of many left organisations to organise dedicated anti-fascist groups. Antifaschistische Aktion was one such group which also included (and was preceded by) the Proletarian Hundreds, Red Front Fighters, Anti-Fascist Youth Guards and others. The SPD organised its Reichsbanner group, and other left parties and tendencies had their own equivalents. In contemporary Germany (and elsewhere in Europe), there are a number of groups which have adopted the label ‘Antifaschistische Aktion’, sometimes with direct links to communist parties, more often drawing from a broader left milieu. The revival of anti-fascism in Germany was one of the results of re-unification, which witnessed an upsurge in racist and neo-Nazi violence. In this instance, AFA drew upon a wider anti-authoritarian tendency often described as ‘autonomist’ and typically hostile to authoritarian socialisms.

• ‘Antifa Australia’ emerged in 2008 as a social media presence. It’s not a group as such but exists as a promotional tool for a particular interpretation of ‘anti-fascist’ politics in Australia. Between then and now, a number of other ‘antifa’ political projects have emerged, and 2015 in particular has witnessed some mild growth in the number of those involved in or in some way associated with the loose networks that have evolved in response to the emergence of Reclaim Australia, the United Patriots Front and allied forces.