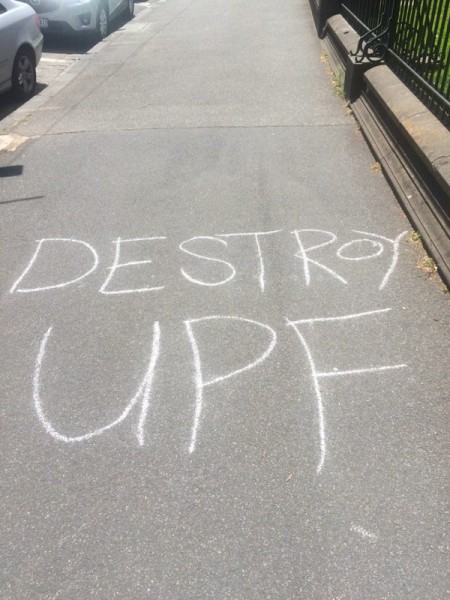 Well, that was embarrassing.

For reasons best known to himself, Blair Cottrell, the neo-Nazi fuehrer of the fascist grouplet the ‘United Patriots Front’ (UPF), decided a few days ago that it would be a really good idea to hold a rally at Parliament House and a march from there to the Premier’s office in Treasury Place.

Because the Premier, Daniel Andrews, described them as semi-literate and hateful bigots.

Several hundred anti-fascists and anti-racists made sure that things didn’t go quite according to the Master Race’s silly plan, however, and the 30-40 UPF members and supporters who stupidly thought they could swan about town on Saturday were soon disabused of the notion, being prevented from assembling at either Parliament or Treasury Place and instead being eventually confined to Macarthur Street — before going home with their tails between their legs.

In summary, the UPF’s shit soufflé simply failed to rise. 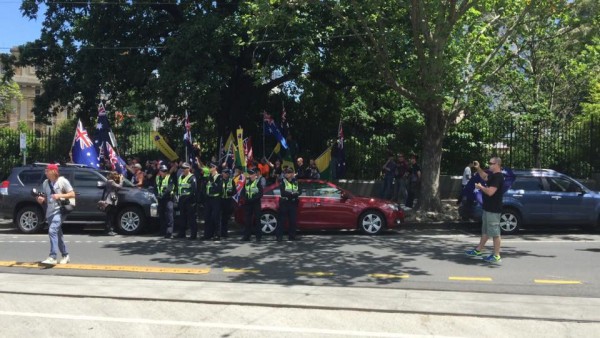 Finally, The Age‘s John Elder claims that the UPF contingent was 150: this is false, as photos and video of the UPF rally demonstrates. Further, there was no ‘clash’; police effectively kept the tiny mob of flagwits well away from anti-fascists. In any case: United Patriots Front and No Room for Racism clash in central Melbourne, The Age, November 28, 2015.

I live in Melbourne, Australia. I like anarchy. I don't like nazis. I enjoy eating pizza and drinking beer. I barrack for the greatest football team on Earth: Collingwood Magpies. The 2023 premiership's a cakewalk for the good old Collingwood.
View all posts by @ndy →
This entry was posted in Anti-fascism and tagged Blair Cottrell, Campaign Against Racism and Fascism, Chris Shortis, Linden Watson, No Room For Racism, Thomas Sewell, United Patriots Front. Bookmark the permalink.

13 Responses to #UnitedPatriotsFront fails to rise in #Melbourne. Again.