The fascists of the ‪United Patriots Front‬ have been terribly ‪#butthurt‬ by statements made by the Victorian premier Daniel Andrews to the effect that they’re a bunch of semi-literate bigots.

As a result, the UPF has declared that they’ll be gathering @ Treasury Place at 1pm tomorrow (Saturday, November 28) to whine and complain.

In response, a dance party (11am, Treasury Gardens) and snap rally (12.30pm, Treasury Place) has been called.

Facebook forced me to remove this image from my page because it upset the delicate sensibilities of Blair Cottrell, the neo-Nazi fuehrer of the UPF. Please feel free to download and re-publish on Facebook and elsewhere. And yes, he really did propose that a portrait of Adolf Hitler be hung in every Australian classroom, that Mein Kampf be issued to every Australian school student annually, is a Holocaust denier, a White supremacist, and believes in a Jewish conspiracy to control the world. 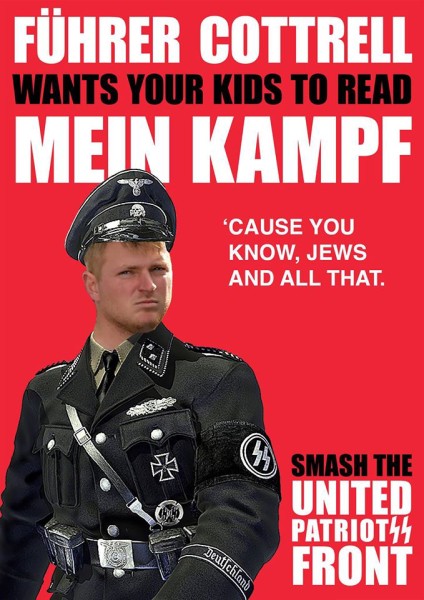 I live in Melbourne, Australia. I like anarchy. I don't like nazis. I enjoy eating pizza and drinking beer. I barrack for the greatest football team on Earth: Collingwood Magpies. The 2023 premiership's a cakewalk for the good old Collingwood.
View all posts by @ndy →
This entry was posted in Anti-fascism, Music and tagged Blair Cottrell, butthurt, Daniel Andrews, Facebook, United Patriots Front. Bookmark the permalink.