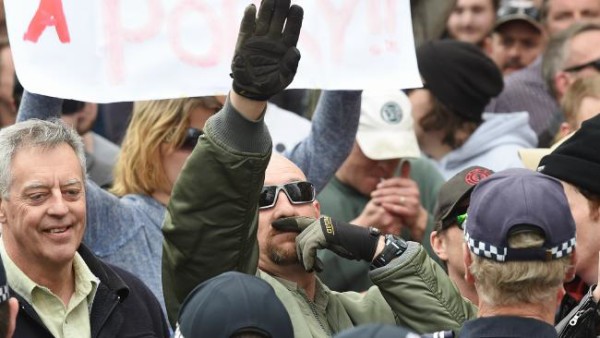 Above : One of a small number of patriotik boneheads at the rally.

Fascist groupuscule the United Patriots Front organised an anti-Muslim rally in Bendigo yesterday which attracted approximately 2-300 supporters, a large crowd of onlookers, and a rally in opposition of approximately the same size (if somewhat smaller). In both cases, many attending were from outside Bendigo.

There were several clashes on the day, with media accounts paying particular attention to an attempt by the UPF to break the police lines which had been established in order to separate the two mobs. (The largely unsuccessful attempt to do so appears to have been prompted by vision of a bloke up a pole trying to set fire to the Australian flag.) Police deployed capsicum spray in order to subdue the UPF and several of its members, including neo-Nazi spokesperson Blair Cottrell, were affected. (Note: ‘Patriots’ received a dose of the half-strength direct aerosol spray and not the full-strength chemical foam deployed against anti-racists on July 18.)

Otherwise: according to VicPol they made no arrests (though several folks were temporarily detained); they also stated that yesterday’s events involved the biggest operation VicPol has staged outside the Melbourne CBD; one lone ‘patriot’ pulled a knife on counter-protesters ‪after the main demonstration had dispersed and as folks were moving from Town Hall to Trades Hall. (He was told to shoo — one of a handful of such incidents.)

• The Bendigo rally was the largest of the three events the UPF has organised, having debuted in Richmond on May 31 and joined with Reclaim Australia to rally in Melbourne on July 18;
• The UPF was able to build upon a small but significant anti-Muslim base in Bendigo and to attract a large number of non-locals to join with them in an expression of solidarity;
• Those addressing the anti-Muslim rally included Melbourne-based UPF leaders Cottrell and (fundamentalist Christian) Chris Shortis and Bendigo local Julie Hoskin. Local councillor Elise Chapman also put in an appearance, as did Sydney-based Ralph Cerminara (Australian Defence League) and Kim Vuga (Go Back To Where You Came From) and Brisbane resident Scott Moerland (Rise Up Australia Party);
• Danny Nalliah/Catch the Fire Ministries/Rise Up Australia Party seems not to have attended;
• Obviously, the mosque, having received council approval, will go ahead (see also : Muslims still feel welcome in Bendigo despite anti-Islam rally, says mayor, Patrick Hatch, The Age, August 30, 2015);
• A ‘global’ rally against Islam has been slated for October 10. Originally touted as involving anti-Muslim activists attending their local mosques, currently the main goal appears to be to assemble in Canberra.

I live in Melbourne, Australia. I like anarchy. I don't like nazis. I enjoy eating pizza and drinking beer. I barrack for the greatest football team on Earth: Collingwood Magpies. The 2021 premiership's a cakewalk for the good old Collingwood.
View all posts by @ndy →
This entry was posted in Anti-fascism, State / Politics, That's Capitalism!, War on Terror and tagged Australian Defence League, Bendigo, Blair Cottrell, Chris Shortis, Islam, Islamophobia, Neil Erikson, Ralph Cerminara, Rights For Bendigo Residents, Scott Moerland, Stop the Mosque in Bendigo, United Patriots Front. Bookmark the permalink.

4 Responses to #Bendigo, mosques and protest …