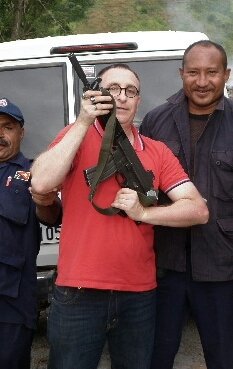 For those of you coming in late, ‘Whitelaw Towers’ (WLT) is a neo-Nazi blog that often functions as a kind of online shit-sheet for Dr Jim Saleam’s ‘Australia First Party’ (AFP). Thus, while there are many entertainingly batshit articles on the AFP website dedicated to trashing the (deregistered) party’s many political enemies, WLT exceeds the site many times in over in terms of size and scale.

WLT originally developed as a replacement for another, short-lived blog titled ‘Victor Whitelaw’ (February–October 2006). The author was a Sydney-based neo-Nazi named Peter Campbell. When ‘Victor’ stopped publishing, WLT was born (October 2006). Campbell was joined by his comrade in Toowoomba (now Chinchilla), Jim Perren — both men proud members of the now-defunct ‘White Pride Coalition of Australia’ — and more recently by AFP member, the Sydney-based Nathan Sykes.

I didn’t realise it until now, but Peter Campbell is actually deaded, having (reportedly) been killed in a motorcycle accident in August 2013. That means sole responsibility for the blog now resides with Perren and Sykes.

Finally, the WLT Facebook page recently merged with the ‘Anti-Antifa Australia’ page, previously maintained by Brisbane bonehead Chris Smith. I’ve been informed that Smith left the project last year and for most of it Perren assumed responsibility for the page.

The UPF paid a visit to Orange yesterday (February 20) as the second leg of their ‘east coast’ tour to promote their fledgling, yet-to-be registered political party, ‘Fortitude’. It’s unclear why they chose Orange to promote it (presumably, they have at least one supporter in town) but the party went down like a lead balloon, the meeting attracting something in the order of 40 or so flagwits, most of whom reportedly came from outta town.

The UPF return to Bendigo on Saturday, February 27, and can reasonably be expected to attract at least a few hundred supporters. It will be the third time the boys have staged a rally in town, having previously organised anti-Muslim rallies on August 29 and October 10, 2015. The October 10 rally was their biggest event thus far, attracting somewhere in the order of 500 to as many as 1,000 people.

Bendigo is an attractive proposition for the boys for two primary reasons. The first is that the UPF is essentially a Melbourne-based project, with its key leaders — Blair Cottrell, Kris0 Richardson, Thomas Sewell and Chris Shortis — living in town. Further, Cottrell and Sewell have had a long association with neo-Nazi group Nationalist Alternative, another Melbourne-based project. In addition, the UPF has been able to attract the support of Melbourne-based Christian fun-da-mentalist party Rise Up Australia. Secondly, the UPF has been able to piggyback upon a long-running campaign by locals to stop the development of a mosque in town.

On the other hand, the events in Toowoomba and Orange have not generated a whole lot of public interest; the denunciations of the UPF as neo-Nazi by former comrades Shermon Burgess and Neil Erikson have made at least a few of their supporters re-think their commitment to the group; the two previous rallies in Bendigo have taken advantage of support from a broader milieu drawn from ‘Reclaim Australia’, its supporters, and various tiny satellites; the event is the launch of a yet-to-be-registered political party which enters an already fairly crowded field (including the Australia First Party, Australian Liberty Alliance, One Nation, Rise Up Australia and various other, right-wing Christian grouplets).

In summary, the event in Bendigo will be a real indicator of the actual level of support for the UPF and Fortitude, and determine whether or not it has actually been able to build a real social base, at least in Bendigo if not elsewhere in the country. Speaking of which, the Bendigo Action Collective has organised a ‘March Against Fascism And Bigotry’ in opposition to the UPF. For details, see their Facebook page.

As noted in my last post, the UPF’s “inner circle” has been penetrated and material assembled there made available on the intarwebs. The material so far released consist of the circle’s Facebook discussion for the period December 22, 2015 to February 15, 2016 (ie, a few days after the Toowoomba rally) and messages exchanged via the Fortitude page for the period December 11, 2015 to January 20, 2016. It appears possible that other material will be released at a later date.

Most of the discussion that takes place among the boys is fairly mundane and of the sort that accompanies any (tiny) political project: the production and distribution of propaganda, creation of contact lists for supporters, scheduling of meetings and so on. Added to this are opinions about the various personalities to be found in the ‘patriotik’ movement, references to the various squabbles that have taken place during this period, and an attempt to solidify some kind of basic organisational structure. Throughout it is clear that Cottrell functions as the fuehrer and that the other boys are subordinate to him — a position which they seem to quite enjoy. Nonetheless, it’s not all smooth sailing, as this angry video addressed to his underlings suggests:

Otherwise, here’s a few more samples of some of the more, ah, interestink things the boys have had to say: 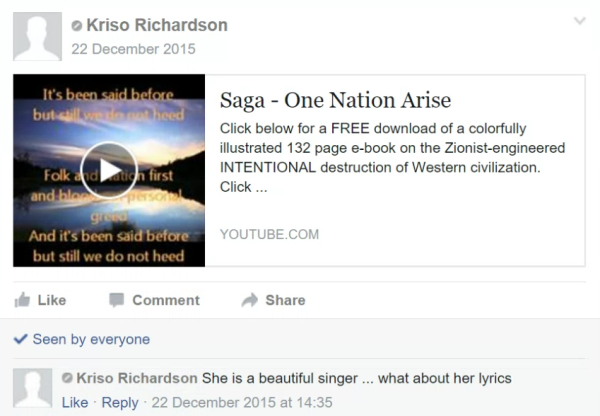 2. Kris0 Richardson expresses a desire to smash the Victorian premier, Daniel Andrews, in the face with a hammer on account of his willingness to apologise for the state’s previous criminalisation of homosexuality: 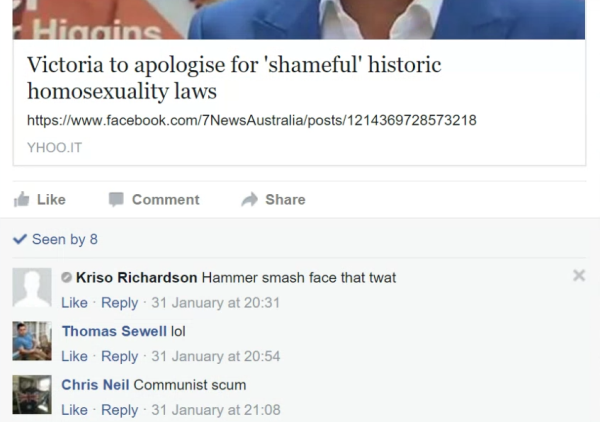 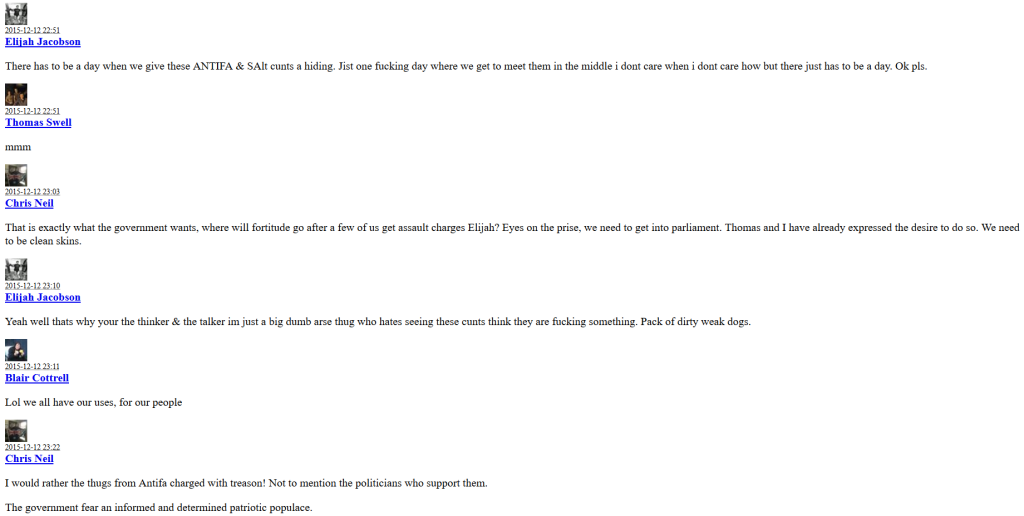 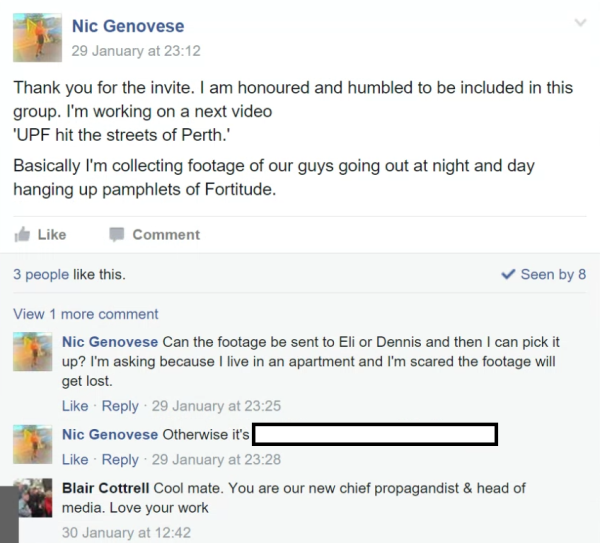 5. Kim Vuga hearts the UPF and is going to Perth in March: 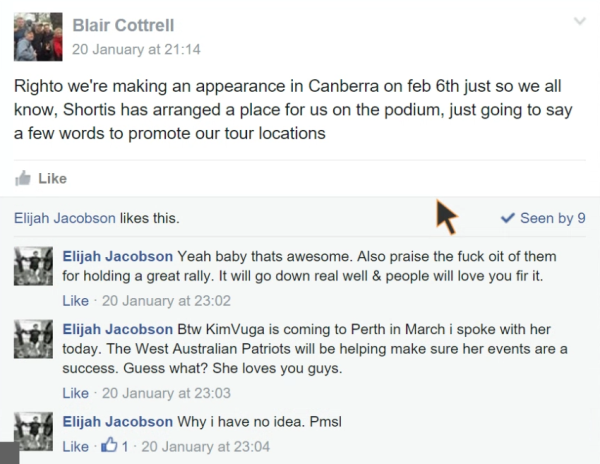 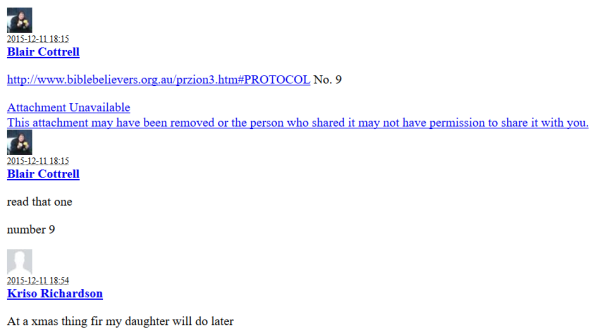