‘Reclaim Australia’ is the name given to a series of public rallies planned for Saturday, April 4 — three weeks before the multi-million dollar ANZAC Day celebrations.

Untangling the threads of the big ball of resentment that is Reclaim Australia is a depressing game. In addition to expressing otherwise mundane white colonial anxieties, it appears to be animated chiefly by herp derp Islamophobia. It may thus be understood as a rough equivalent to the PEGIDA movement in Germany and a rallying point for the lost legions of the Australian Defence League (ADL) and Patriots Defence League Australia (PDLA). Indeed, the removal of several popular ADL pages on Facebook has meant that the thousands of xenophobes who previously expressed support for right-wing loons like Ralph Cerminara (who reportedly remains in jail) have a new home at Reclaim Australia. Reclaim Australia has also attracted the support of The Usual Suspects on the far right, from neo-Nazis to the semi-pro Islamophobes of Restore Australia (Mike Holt has accepted an invitation to speak at the rally planned for Sydney) and everything in-between.

The most prominent advocate of the rallies is Shermon Burgess, aka ‘The Great Aussie Patriot’. A member of the ADL, Burgess is also the bRanes behind ‘Eureka Brigade’, a God-awful studio project that briefly came to media attention via the songs ‘Border Patrol’ (supporting naval operations against asylum seekers) and ‘ADL Killing Machine’ (see : Far right targets Muslims with hate campaign, Greg Ansley, The New Zealand Herald, April 26, 2014) and his vocal support for killing asylum seekers aka ‘Muslim rapists and terrorists’ (see : Who Are The Australian Defence League?, New Matilda, January 29, 2014). 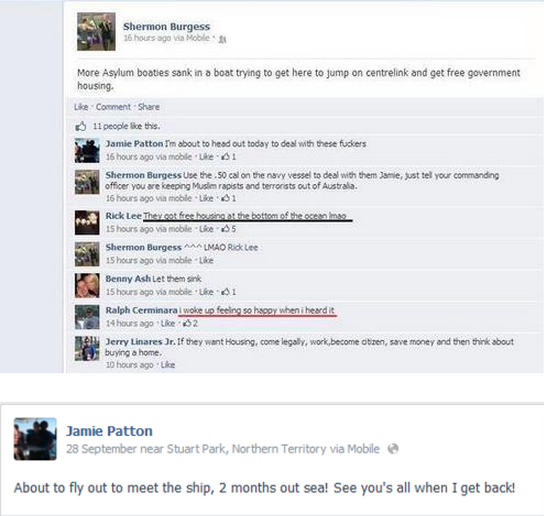 When he’s not wishing death on asylum seekers, Burgess can also be found expressing fear and hatred of Indigenous peoples — the one group which might be thought to have some grounds for ‘reclaiming Australia’ from its current rulers — describing them as mostly comprised of resentful, drug-addicted “dickheads”:

Burgess is also a fan of neo-Nazi music. In general then, his views express a basic commitment to fascism and White supremacy draped in the Australian flag. Ian Adams:

The common elements of fascism — extreme nationalism, social Darwinism, the leadership principle, elitism, anti-liberalism, anti-egalitarianism, anti-democracy, intolerance, glorification of war, the supremacy of the state and anti-intellectualism — together form a rather loose doctrine. Fascism emphasises action rather than theory, and fascist theoretical writings are always weak …

It’s therefore appropriate, given also his support for neo-Nazi groupuscule ‘Squadron 88’, that Burgess should be the face of and have assumed chief responsibility for promoting ‘Reclaim Australia’.

I live in Melbourne, Australia. I like anarchy. I don't like nazis. I enjoy eating pizza and drinking beer. I barrack for the greatest football team on Earth: Collingwood Magpies. The 2021 premiership's a cakewalk for the good old Collingwood.
View all posts by @ndy →
This entry was posted in Anti-fascism, Media, Music, State / Politics and tagged Cronulla, Eureka Brigade, Islamophobia, Reclaim Australia, Shermon Burgess, Squadron 88, The Great Aussie Patriot. Bookmark the permalink.