Sydney-based neo-Nazi groupuscule Squadron 88 (88 = HH = Heil Hitler) organised a protest to take place at Penrith station this evening at 6.30pm. The purpose of the rally was to oppose the construction of an Islamic community centre (‘mosque’) in Penrith which, despite some opposition, was approved by council late last year. The rally has now been postponed until next Friday (January 23).

S88 has adopted as its mascot veteran neo-Nazi Ross ‘The Skull’ May, who’s featured in several videos the group has uploaded to YouTube (and is not a big fan of my blog): 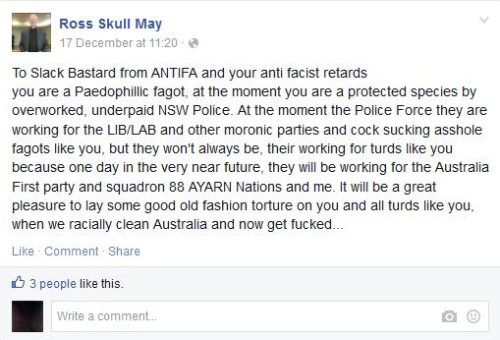 A recent video showed the elderly AYARN strolling the streets of Ashfield denouncing the number of ‘gooks’ in the area; other smash hits have included one in which he fantasised about the formation of ‘darkie patrols’ to confront black Australians in Sydney (both videos have since been removed from the site).

May is a close associate of Dr Jim Saleam, the leader of the Australia First Party, and its members work closely with those belonging to AFP: below is a photo of two members of S88 holding an AFP banner at the anti-Muslim rally outside Penrith council chambers on November 24: 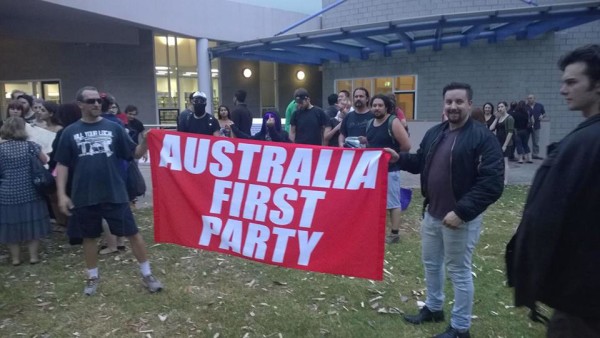 Reclaim Australia is the banner under which Muslim-hating Australians are being called on to march on April 4. To that end, numerous Facebook pages have been created to promote rallies in capital cities and regional centres.

The bRanes behind Reclaim Australia is Shermon Burgess aka the Great Aussie Patriot aka Eureka Brigade. (You may remember Eureka Brigade from such songs as ‘Border Patrol’. Chorus: ‘We’re sick of your shariah burn your fucking mosques, it’s time to show you muzzrats we’re the fucking boss, you thought you had it easy but you surely lost, Cronulla was Australia’s Muslim holocaust.’) Burgess has been involved in anti-Muslim agitation for several years now, and describes himself as a patriot. Notably, Burgess has also helped to promote S88’s Penrith rally, describing the neo-Nazi group as similarly patriotic: 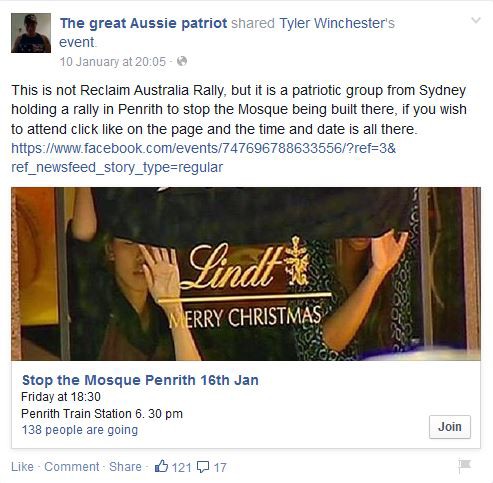 Like other political projects which place hatred of Muslims at their centre, Reclaim Australia has attracted widespread support from the far right, and the distinction — not terribly large to begin with — between a ‘mere patriot’ and a racist bigot has effectively collapsed in this domain.

Precisely how many suburban Mums ‘n’ Dads want to join the ranks of the far right at Reclaim Australia will be an interesting outcome to watch.

I live in Melbourne, Australia. I like anarchy. I don't like nazis. I enjoy eating pizza and drinking beer. I barrack for the greatest football team on Earth: Collingwood Magpies. The 2021 premiership's a cakewalk for the good old Collingwood.
View all posts by @ndy →
This entry was posted in Anti-fascism and tagged antifa notes, Australia First Party, Dr James Saleam, Dr Jim Saleam, James Saleam, Jim Saleam, Penrith, Reclaim Australia, Ross 'The Skull' May, Shermon Burgess, Squadron 88. Bookmark the permalink.