If you use Facebook and are in any way involved in expressing opposition to racism and fascism then there’s some possibility you will be targeted by the far right. The more active and vocal you are, the more likely you will come to their attention.

As a general rule, it’s a good idea to only publish personal information which you are happy to be made public. Further, do not accept friend requests from people you do not know unless others you know and trust can vouch for them. Fascists have established a number of fake profiles on Facebook which are used to either troll or to befriend and obtain information from targeted individuals. Many of these profiles make a special point of appearing to be ‘anti-fascist’.

There are various means by which to limit the amount of information users make available on Facebook. Facebook privacy settings allow users to moderate the public availability of this information — this feature is especially useful for older accounts. Periodically checking these settings is a good idea, both because Facebook has glitches and because its policies and practices change over time. If your account is used to share photos with family and friends, remember that while your own account may be secure, this doesn’t mean information shared with family and friends can’t be accessed via these other accounts.

Finally, note that fascists are happy to publish information regarding a person’s name, address, photo, description and other personal details including workplace. They are also happy to target a designated person’s family and friends, irrespective of whether or not they share the views of those targeted in this manner.

There are three main sites that neo-Nazis use to publish information they obtain about their real or alleged opponents: Stormfront, Whitelaw Towers and Anti-Antifa Australia.

Based in the US, Stormfront is the world’s leading neo-Nazi and White supremacist/nationalist website, run by convicted terrorist and former Klansman Don Black. Whitelaw Towers is a blog jointly written by Peter Campbell and Jim Perren. Anti-Antifa Australia, another blog, was established by Chris Smith. Campbell, Perren and Smith are supporters of the Australia First Party and work in close collaboration with them. Any information obtained by these individuals will be shared with AF and a range of other groups and individuals on the far right as well as with the general public.

Peter Campbell is a middle-aged, Sydney-based neo-Nazi who was one of those responsible for establishing the White Pride Coalition of Australia (WPCA) in 2002, a coalition which brought together neo-Nazis and White supremacists from the Australian Nationalists Movement, KKK, (New Zealand) National Front, National Socialist Party of Australia and World Church of the Creator. The WPCA dissolved in 2004 but in 2014 was revived as a Facebook page and organising project. In 2006, Campbell was responsible for republishing a Combat 18 (C18) document for local distribution called ‘How to build a David Copeland special’ (‘White patriot’ denies violence, Andrew Fraser and Greg Roberts, The Australian, September 16, 2006). David Copeland was an English neo-Nazi responsible for conducting bombings directed at London’s gay and immigrant communities in April 1999. Three people were killed and hundreds more injured as a result of the bombings. (C18 continues to eke out a marginal existence in Australia, largely by way of Creatard Patrick O’Sullivan‘s stickering campaign in Melbourne: a recent sample from Richmond below.) 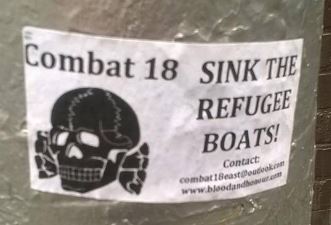 Jim Perren is a Queenslander, originally based in Crows Nest outside of Toowoomba (where he worked as a shooter and bouncer) but now apparently living in Brisbane and, presumably, continuing to work in the security industry. Now in his late 40s, Perren has attended Australia First Party events and is also responsible for helping obtain jobs in the security industry for other neo-Nazis, including members of the Hammerskins.

Chris Smith is a bonehead from Penrith, Sydney now based in Brisbane. He has a criminal record for assault and robbery, having been convicted in late 2010. In addition to publishing the Anti-Antifa Australia blog, Smith is the chief organiser of the neo-Nazi skinhead group Volksfront (VF). VF was originally established in Portland, Oregon in the early 1990s but grew rapidly in the US and established a presence in several other countries. The group was declared dissolved by its founder in September 2012 after the mass shooting at a Sikh temple in Wisconsin by Hammerskin and former VF intimate Wade Michael Page. The Australian branch is the only VF branch still active.

4 Responses to A note on Facebook (esp for Strayan #antifa) …