UPDATE (February 3) : Dandenong factory workers claim ‘significant win’ after four-day lunchroom protest, Nick Toscano, The Age, January 30, 2015 | In the factory and in the street, Labor [/labour] is learning again that there is power in a union, Van Badham, The Guardian, February 3, 2014.

‪#‎OccupyDandenong‬ workers have been occupying the site since Tuesday morning — over three days now — following an attempted lockout by #IFF management.

Workers are demanding that they (and all other workers):

• receive a fair wage;
• do not have their working conditions degraded;
• be treated with respect;
• have the right to organise;
• enjoy job security;
• get their fair share of social goods;
• are free to express themselves;
• are able to express solidarity with other workers +;
• work without employer intimidation.

Keep up-to-date by following the #OccupyDandenong hashtag on Twitter or via the National Union of Workers Facebook page. 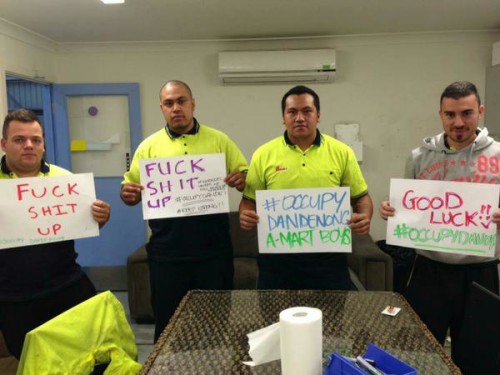 I live in Melbourne, Australia. I like anarchy. I don't like nazis. I enjoy eating pizza and drinking beer. I barrack for the greatest football team on Earth: Collingwood Magpies. The 2021 premiership's a cakewalk for the good old Collingwood.
View all posts by @ndy →
This entry was posted in State / Politics, That's Capitalism! and tagged #IFF, #OccupyDandenong, 310 Dandenong-Frankston Rd Dandenong South, International Flavours & Fragrances, National Union of Workers. Bookmark the permalink.