UPDATE (August 6, 2015) : Police have charged a 38-year-old Moe man with threats to kill, threats to inflict serious injury and stalking related matters. The threats were allegedly made to Stephen Jolly (see below). 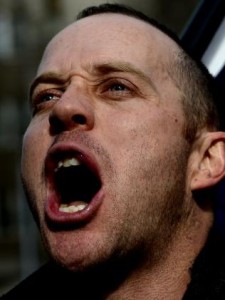 Yesterday news.com.au published a story about Shermon Burgess, AKA ‘The Great Aussie Patriot’, his role as the public face of ‘Reclaim Australia’ and, since May, of the ‘United Patriots Front’ (UPF). Also yesterday, Fairfax carries an item re alleged threats by a Reclaim Australia supporter to ‘slit the throat’ of Muslim lawyer Mariam Veiszadeh. See : ‘Some of us still have balls left’: Shermon Burgess claims to be standing up for Australia, but who is he?, August 4, 2015 | Reclaim Australia supporter charged with threatening to slit the throat of prominent lawyer, Rachel Olding, The Sydney Morning Herald, August 4, 2015.

It’s important to note that violent rhetoric has been Burgess’s stock-in-trade for some years now, first as an ‘Australian Defence League’ (ADL) member and then as a member of the God-awful studio band ‘Eureka Brigade’. news.com.au notes that Burgess ‘was a reputed member of the extreme-right Australian Defence League before becoming one of Reclaim Australia’s chief spokesmen’. In reality, Burgess’s membership of the ADL was not merely reputed but actual. Indeed, you can find a number of videos on YouTube uploaded to an ‘Australian Defence League’ account featuring both Burgess and Ralph Cerminara — sometime ‘President’ of the ADL and still one of Burgess’s closest comrades — doing their best to agitate Muslims and to attract support for the ADL’s campaign to rid Australia of their presence by distributing anti-Muslim propaganda at mosques.

Burgess’s contribution to Eureka Brigade makes both his relationship to the ADL and his position on Islam crystal-clear: The song ‘Ralph Cerminara ADL Leader’ speaks of the band’s love of the ADL President, while ‘ADL Killing Machine’, ‘Border Patrol’ and ‘Shit On A Mosque’ spell out the band’s militant opposition to Islam, desire to exterminate Muslims and to eradicate any trace of Islam in Australia. Sample lyrics: Ralph Cerminara he’s our man/The Leader of the ADL klan … Punch us a Muslim/Have a good time/Ralph Cerminara will show you his might (‘Ralph Cerminara ADL Leader’). Warriors of the ADL/Heed the call now/No fucking surrender/Ralph Cerminara’s gonna send the Muzrats [sic] back to the Sahara … It’s time to join the ADL/Send the Muslims back to Hell … No sharia, no halal/Time to get the .50 cal … A towel is not a fucking hat ya fucking sandmonkeys/And the fucking burqa/You’re not ninjas/Fuck off/Cunt/Go back to Arabia/Fuck you/Dirty fucks (‘ADL Killing Machine’). The Navy is here/So have no bloody fear/Sink Islamic boats/It’s time to have a beer/Australian Navy/Oi oi oi/A Stinger missile is what we’ll deploy/Your boat will fucking sink/The sharks’ll get the rest/HMAS Aussie Pride is the fucking best … We’re sick of your sharia/Burn your fucking mosques/It’s time to show you Muslims/We’re the fucking boss/You thought you had it easy/But you surely lost/Cronulla was Australia’s Muslim Holocaust (‘Border Patrol’).

The weeks prior to and following the July 18/19 RA/UPF rallies also generated several stories regarding the allegedly violent intentions of its followers, from allegations that the UPF planned to bring arms with them to the rally in Melbourne, the re-appearance of RA organiser James Gilhome (armed with similar tales), the publication of a video by UPF Melbourne leader Neil Erikson celebrating the stabbing death of a teenage anti-fascist in Madrid, death threats sent to Yarra councillor Stephen Jolly and an alleged incident in which Burgess and some of his supporters assaulted at least two other individuals they identified as being ‘anti-fascists’. In this incident, which took place on July 18 in Melbourne, Burgess further alleges that he stole a student card from the unconscious body of one of his victims, with the card and the person’s name and photograph being prominently displayed in a video he later published proudly informing the public of his magnificent victory. In-between these events, Victoria Police managed to deploy pepper spray upon an estimated 100 counter-protesters in Melbourne (the effects of which rendered one man unconscious) in a move widely celebrated by Burgess and his followers. See also : Medics’ Statement on July 18 anti-racist/fascist Demonstration, Melbourne Street Medic Collective, July 18, 2015.

Beyond this, the UPF has indeed claimed ‘solidarity with the Greek Neo-Nazi party Golden Dawn, which was founded by Holocaust denier Nikos Michaloliakos’ (news.com.au), as have Shermon Burgess and Eureka Brigade. By the same token, Iggy Gavrilidis, spokesperson for Golden Dawn in Australia, has expressed support for RA and the UPF (though numbers on the ground have been fairly thin). In any case, Holocaust denialism is present in the UPF by way of Erikson and Blair Cottrell, the leadership of the UPF in Melbourne. Both Erikson and Cottrell have, inter alia, expressed such denialism, with Erikson having attended the 2010 Australian tour by Canadian denialist Paul Fromm and Cottrell having outlined his views on ‘The Jews’ in a series of comments on YouTube and elsewhere (see : Quotations From Chairman Cottrell).

In summary, the ADL, RA and the UPF have been steeped in violent (and often quite demented) rhetoric, with each aiming to eradicate Islam and ‘the left’ from Australia. Obviously, the task they have set themselves is not something they have the capacity to accomplish. Thus it’s not very surprising that as the movement — such as it is — has developed, and as its activities have been successfully countered — in brief, as it has become evident that the movement is in fact failing — so a recourse to further such rhetoric and even actions becomes that much more likely. In addition, as Guy Rundle and others have noted, ‘Jew-hatred/anti-Semitism is on the march again in Australia … channelling all the obsessions of the last century.

Talk to bikies — not all bikies by any means — at a Reclaim Australia rally, and you’ll hear the old Jew-hatred, anti-Semitism, the “socialism of fools”, all the old tunes: how sneaky the Jews are, how they run things, how an ordinary bloke can’t get ahead, 9/11, Building 7, the works. Then ask them about Israel, and you’ll find they’re Zionists to a core. Why? Well anti-Semitic Zionism has a long history, but in this case it’s about plain sight. Israel is “the good Jews”, i.e. landed, nationalised and not a tribal presence in Christian society, who are the “bad Jews”.

As Reclaim Australia fades, one of the things it may leave in its wake is a revitalised radical, right-wing movement, one in which neo-Nazis play a critical role. And that story rarely ends well …

The pressure told and the Nazis turned on each other as deeply repressed suspicions and rivalries burst through to the surface. Everybody seemed to accuse everyone else of being police spies and sexual deviants. The final slide into ignoble collapse was marked by the gunshot murder of Wayne ‘Bovver’ Smith in [National Action’s] headquarters at Tempe a few years later. It was an almost perfect example of the hapless farce which so often attended the adventures of Sydney’s neo-Nazi elite in the 1980s. Bovver, twenty-five years old and already weighing 108 kilos thanks to the three or four stubbies of beer he’d consume for breakfast each morning, was shot eight times with a sawn-off .22 rifle by Perry Whitehouse, ten years his senior but less than half his size, during a drunken, confused and basically pointless argument. When Whitehouse blew him away, Bovver was wearing a singlet bearing the message: Say No To The New Gun Control Laws.

How I Infiltrated a White Pride Facebook Group and Turned It into ‘LGBT Southerners for Michelle Obama’, Virgil Texas, Vice, August 3, 2015.