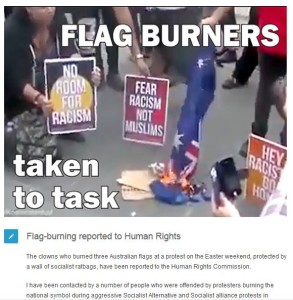 Poor old George Christensen — who can boast that he is the only federal or state MP to have accepted an invitation to address a Reclaim Australia rally (Mackay, July 19) — has had his complaint to the Human Rights Commission re opposition to Reclaim Australia — specifically, the burning of the Australian flag at a protest in Melbourne on April 4 — dismissed. According to Christensen:

The clowns who burned three Australian flags at a protest on the Easter weekend, protected by a wall of socialist ratbags, have been reported to the Human Rights Commission.

I have been contacted by a number of people who were offended by protesters burning the national symbol during aggressive Socialist Alternative and Socialist [A]lliance protests in Melbourne. Many people were surprised it is not against the law to burn the Australian flag in such a manner and they feel offended and threatened when they see these actions taking place in Australia and broadcast on the news.

I have asked the Racial Discrimination Commissioner to investigate the protests to see if they are unlawful under Section 18C of the Racial Discrimination Act. According to the Act, it is unlawful to perform any action in public that is likely to offend people of a particular race, religion, or national background. If sections of the Act can be applied to one race or nationality it must apply to all, whether a minority or the majority.

Burning of flags, physical violence, and placards and chants labelling people “racist” were part of a counter-protest attended mostly by university students and members of the Socialist Alternative in response to organised rallies by Reclaim Australia.

Reclaim Australia organised rallies in at least 16 cities around Australia, including Mackay and Townsville, voicing concerns about the rise of Islamic extremism, a push to introduce Sharia law into Australia, and the connections between Halal certification and funding for terrorist organisations.

These were legitimate concerns that were not targeting individuals or a specific religion. Radical Islam is an ideology that has more to do with politics than any religion and certainly has nothing to do with race, but professional protesters have tried to make it about race and engaged in extremely racist and intolerant actions.

It is a shame the Socialist ratbags took such aggressive and racist action to shut down any free speech that doesn’t agree with their own ideology. According to the Left, free speech is a right – as long as you agree with the Left.

The ‘clowns’ in question — aka Warriors of the Aboriginal Resistance — released a media statement following the flag burning. See : Warriors of Aboriginal Resistance burns butcher’s apron in defiance of racist ‘Reclaim Australia’ rally, Green Left Weekly, April 9, 2015. The action made the Reclaimers very upset, but this was not the first time WAR had burned the Australian flag as an act of resistance to colonialism and racism. See : Why WAR burned six Australian flags – MEDIA RELEASE, November 20, 2014.

A complaint by government backbencher George Christensen that protesters opposed to a Reclaim Australia rally sought to incite racial hatred has been dismissed by the Australian Human Rights Commission.

Mr Christensen — the only federal Coalition MP to speak at a Reclaim Australia rally — alleged that a group called Warriors of the Aboriginal Resistance in April burnt three Australian flags “which, as an Australian, I find to be particularly racist behaviour”.

The Queensland politician argued that the counter-protest breached section 18C of the Racial Discrimination Act, in that the flag-burning targeted Australians of European descent and was intended to cause offence, insult and humiliation, and dissuade people from joining the rally.

In a letter to the commission, Mr Christensen pre-empted any suggestion the Reclaim Australia rally was racist, saying the movement did not target individuals nor any particular racial group. “As we have seen, Islamic extremists … are not represented by a single race, nor can radical Islam be considered only a religion as it is ideological and as much a political movement as it is a religion,” he wrote.

In response, one of the commission’s case officers acknowledged Mr Christensen’s concerns, but said: “It is unclear how it could be argued that the burning of the Australian flag was done because of your race, colour, or national or ethnic origin, or that of other Australians of European descent more broadly.” No action was taken.

Race Discrimination Commissioner Tim Soutphommasane last week warned of “organised racist movements” such as Reclaim Australia causing disharmony and urged anyone offended to “seek the protection of laws that prohibit such hatred”.

“At these rallies, far-right, racial-supremacist agitators have been visibly present,” Dr Soutphommasane told an audience at Australian National University. “People with xenophobic political agendas have also been present. Pictures and footage of the rallies clearly show that people sporting Nazi tattoos and other insignia have been openly parading their extremist sympathies.”

He said the “corrupted national pride” that emerged during the Cronulla riots had returned in “a strain of patriotic expression that is tainted with the stain of aggressive nationalism”.

“It is time that we reclaim patriotism,” he said.

“So we say, we always say in the Black Panther Party, that they can do anything they want to us. We might not be back, I might be in jail, I might be anywhere. But when I leave, you can remember I said with the last words on my lips that I am a revolutionary and you’re going to have to keep on saying that. You’re going to have to say that I am a proletariat. I am the people, I’m not the pig. You got to make a distinction.”