Citizen slackbastard is a detective (The 7.30 Report) 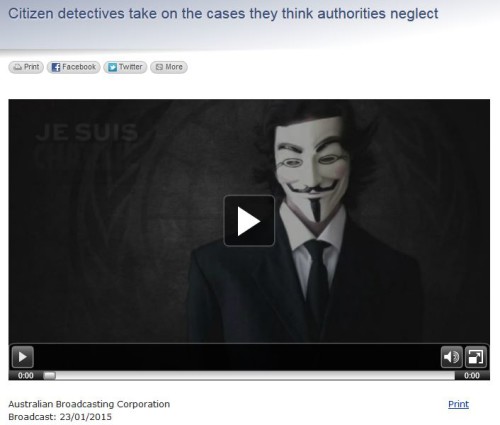 ALISON CALDWELL, REPORTER: In May last year, a neo-Nazi rally in Brisbane was interrupted.

A group of construction workers from a building site nearby had been tipped off about a demo supporting Greece’s Golden Dawn party. Without warning, a counter-rally sprang into action.

The counter-rally wasn’t the unionists’ idea. It was organised by a man on a computer nearly 2,000 kilometres away.

‘ANDY FLEMING’, CYBER ACTIVIST: What I do is try and monitor the activities of the far-right in Australia and the events that they organise.

ALISON CALDWELL: ‘Andy Fleming’ is a cyber activist who trawls the web for information and cultivates sources inside the organisations he’s targeting. That’s how he found out about the planned neo-Nazi demonstration.*

‘ANDY FLEMING’: I published a Facebook page asking for people in Brisbane to go along to oppose their rally. Fortunately, a number of unions had a presence of several hundred of their members. I was able to provide them and others with information about who Golden Dawn was, an anti-union neo-Nazi organisation. They agreed that it was in their interest to oppose them, so they did. I think what happened in the end is the Nazis had to escape in a taxi driven by an Indian taxi driver from the event.

ALISON CALDWELL: ‘Andy Fleming’ is one of thousands of online activists around the world who are using the internet to right the wrongs they see in society. He says he’s received death threats and doesn’t want to appear on camera.

It’s not enough for him to write letters to the newspapers or lobby politicians for change.

‘ANDY FLEMING’: I found it useful to obtain information about these groups which can be used at opportune moments when and where it becomes necessary.

‘ANDY FLEMING’: I think so. I think I’ve been a disruptive influence. And I should also add that I’m working with a range of other people who belong to a kind of loose network of people who do the same kinds of work.

* Correction: the joint Australia First Party/Golden Dawn rally was a public affair; the first time GD in Australia had openly declared they would hold such an event (they have not done so again).

I live in Melbourne, Australia. I like anarchy. I don't like nazis. I enjoy eating pizza and drinking beer. I barrack for the greatest football team on Earth: Collingwood Magpies. The 2023 premiership's a cakewalk for the good old Collingwood.
View all posts by @ndy →
This entry was posted in Anti-fascism, Media, State / Politics, Television and tagged Australia First Party, Golden Dawn, Golden Dawn Australia, The 7.30 Report. Bookmark the permalink.

2 Responses to Citizen slackbastard is a detective (The 7.30 Report)