UPDATE : Far-right anti-Islam group to rally at Victorian Parliament House, Patrick Hatch, The Age, July 12, 2015. The Age article makes reference to something I wrote about below: “Police are investigating messages sent on social media that appear to show discussion about members “packing” (slang for bringing a weapon) at Saturday’s rally.” I republished the screenshot on my Facebook page along with some commentary. A few hours later, Facebook deleted the image, presumably as a result of it being reported: I’ve included it in the post below. 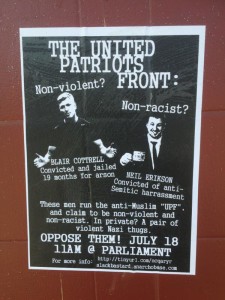 The hate rallies in the major cities are being opposed and you can find out more infos by visiting the following Facebook pages:

*The rally in Hobart is being organised by the UPF.

In other, related news …

• Gerald Keaney and Scout Finch have published a zine titled Reclaim Reason. It critiques the various demands made by RA and you can download a PDF version here.

• The Rock Against Racism benefit gig on Thursday @ The Evelyn done good: mAAAd props to all who organised + attended + for more antifa goodness in Melbourne, be sure and like the Melbourne Antifascist Info Facebook page (+ check out the blog too). A zine + some other other agitprop was produced for the occasion — I’ll upload when I’m able.

• Semi-pro Islamophobe Ralph Cerminara (Australian Defence League) will be joining fanboy Shermon Burgess (‘The Great Aussie Patriot’) on board a busload of bigots travelling from Sydney to Melbourne in order to reinforce the UPF’s puny ranks for July 18.

• The past week has seen relations between ‘Reclaim Australia Melbourne’ (aka Bendigo businesswoman Monika Evers) and the ‘United Patriots Front’ (Shermon Burgess, Blair Cottrell, Neil Erikson & Co) break down completely after RA announced that they would be rallying @ Parliament House @ 11am rather than @ 1pm as the UPF had earlier announced. Following this, Burgess denounced Monika Evers as a traitor, alleged she had stolen money from patriots and even (allegedly) threatened to attack her should he see her on July 18.

• As RA has attempted to place some distance between it and the UPF, the UPF has been increasingly open (or increasingly batshit, depending on your perspective) about its commitment to right-wing ultra-nationalism (fascism) and White nationalism. So too, its commitment to employing violence against any who dare to challenge the UPF’s Little Nuremberg rally in Melbourne. To this end, convicted anti-Semite and neo-Nazi Neil Erikson posted a video online in which he celebrated the stabbing murder of 16yo Carlos Javier Palomino in Madrid in November 2007 by a neo-Nazi named Josué Estébanez de la Hija. “This is bloody awesome … this is gold guys, gold. We have the power … Bring on July 18, Melbourne, Parliament House, 1pm.”

Further to this, a page titled ‘United Patriots Front Exposed’ has published a screenshot of a conversation between UPF member Linden Watson and an unknown other. (You may remember Linden from such videos as the one in which, posing in a CFMEU top, he denounces a fellow unionist for not supporting the UPF.) In this conversation, Watson reveals that the UPF are intending to arm themselves for the July 18 rally.

Unknown: what else are you bringing? lefty repellent haha
Watson: you could say that ..
Unknown: what do you mean?
Watson: lets just say that these lefties wont fuck with us again
Unknown: [smile emoticon] ?
Watson: well dont bring a camera on the day ok
Unknown: why?
Watson: neil and blair are gonna be packing
Unknown: mate dont!! they will get caught
Watson: no they shouldnt be. on may 31 we tested how well the police search. they dont do a good job so it is fine. only small ones anyway
just in case one uses it in a big crowd we dont want people to see so dont film the crowd if a fight breaks out ok?
neil is filming and filming when its safe to do so
Unknown: you guys need to rethink that! what is that going to accomplish??
Watson: dont fuck with UPF traitors

In summary, fascists appear to be planning to use as much violence as they can in order to ‘smash the left’ in Melbourne on July 18. 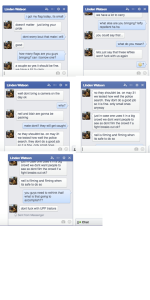 • Finally, for the lulz: