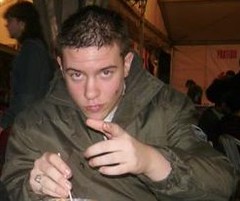 On November 11 in Madrid, a local neo-Nazi party, Democracia Nacional — which, incidentally, has adopted the imagery which recently helped the far right in Switzerland gain record votes — organised a public rally, officially in order to protest “anti-Spanish racism” (sic). (Spain in November is apparently replete with racist and fascist demonstrations of one sort or another.) Madrid antifa organised a counter-protest. On their way to it, a small group of antifa encountered some of the neo-Nazis in or near a train station. A fight broke out, and a 16 year old antifa was stabbed to death, and a number of others (perhaps six) injured. One person has been arrested by police and charged with the murder. Democracia Nacional, which is also expected to contest elections next March, has denied all involvement, as well as the allegation that one of their members was responsible for the stabbing. Following the murder, there have been rallies in Madrid and a number of other cities across Spain, and in Madrid a number of banks and other business properties damaged…

Update November 13 : According to further reports, Carlos was with a group of friends when they encountered a neo-Nazi in the metro. When confronted, the fascist stabbed Carlos in the heart, and another antifa in the lung, and then fled. He was soon caught, and badly beaten. When police arrived, they attacked the antifa and took the fascist, a member of the army, to hospital, where he remains in a serious condition. The neo-Nazi protest was authorised by local government authorities and scheduled to take place in an area (Usera) with a relatively high population of immigrants, principally from South America. November 20 is the anniversary of fascist dictator Franco’s death, is marked by fascist protests and outrages, and the period leading up to it by other, smaller actions by the far right. On the other hand, an antifa taking part in the counter-protest on November 11 was shot with a rubber bullet by police; a reaction to anti-fascist actions — ie, repression — typical of Spanish authorities.

Update November 14 : Fuck me. Spanish authorities have apparently granted some fascist twats legal permission to hold a rally on November 17: “MADRID, Spain (AP) – A Spanish court has given the go-ahead for a far-right rally this weekend despite tensions after a fight between leftist and rightist gangs left a teenager stabbed to death, officials said Tuesday. The demonstration will commemorate the killing of Jose Antonio Primo de Rivera in 1936 by leftist forces during the Spanish Civil War… The demonstration is to include a march to the Valley of the Fallen, a massive monument housing the tombs of Franco and Primo de Rivera 54 kilometers (34 miles) northwest of Madrid.” And in Prague: “Czech right-wing extremists announced that they will hold a November 17 rally after police prevented a neo-Nazi march from taking place in Prague’s Jewish quarter last Saturday in keeping with a court ban. The new demonstration is scheduled for Palackeho namesti square, the Prague “Hyde Park,” according to the Web site of the Autonomous [!] Nationalists. Participants are urged on the site to arrive dressed in black, preferably with wreaths, candles, flowers and black flags in mourning for “freedom of speech”.” What’s that old saying? ‘Your funeral. Our party.’

Also : According to ‘Think Spain’, David Fucking Duke is gonna address Spanish fascists later in November, but in the meantime, “…the regional government of Madrid has authorised four demonstrations convoked by various extreme right-wing organisations over the coming days. Next Saturday, the Falange will pay tribute to former party leader, Primo de Rivera… On Sunday, the National Confederation of Ex-Combatants will gather, and on the 20th November itself, the National Front will get together at the Valle de los Caídos while the Falange will meet up in Alcalá de Henares. Permission for a demonstration organised by the Anti-Fascist Confederation on the 24th November has been denied.”

Update November 21 : In Madrid, the expected rally declared by National Democracy in Puerta del Sol failed to materialise, and despite attempts at intimidation by police, approximately 500 (police estimate) to 1,000 (organiser estimate) people took to the streets to remember Carlos and to let the fascists know they will not pass. Other rallies, both authorised and unauthorised, took place on November 17 in Barcelona and in other cities around Spain. On November 20, fascists held rallies to commemorate the deaths of Primo de Rivera in 1936 and Franco in 1975. Note that November 20, 1936, is also the day upon which Buenaventura Durruti was killed in Madrid.

It is we the workers who built these palaces and cities here in Spain and in America and everywhere. We, the workers, can build others to take their place. And better ones! We are not in the least afraid of ruins. We are going to inherit the earth; there is not the slightest doubt about that. The bourgeoisie might blast and ruin its own world before it leaves the stage of history. We carry a new world here, in our hearts. That world is growing this minute.

MADRID, Spain: One person [Carlos] was stabbed to death and at least seven were injured when fighting broke out Sunday between two politically opposed gangs in an underground railway station in Madrid, officials said.

A man died from stab injuries to the heart, and another four were hospitalized — one in serious condition — emergency service spokesman Javier Ayuso said.

Some people suffered from gas inhalation, although it was not clear if this was from personal defense dispensers or fire extinguishers, Ayuso said.

“It was a very violent fight in a confined space,” Ayuso said.

Press reports said the clash occurred when a right-wing gang on the way to an anti-immigration rally encountered a left-wing gang in the station.

Among the injured were a policeman who was hit on the head with a bottle and a female metro attendant who suffered an anxiety attack, Ayuso said.

“Madrid is an open and integrated region where there is no room for racist, xenophobic or extremist expressions,” Prada said.

Hundreds demonstrated in Madrid’s Puerta del Sol on Sunday evening in protest at the death of a 16 year old boy who was stabbed to death in a clash between two rival gangs in the Legazpi area of the city on Sunday afternoon. Eight others were injured in the clashes – one of them seriously – and one of them could be the suspected attacker, according to a report by the EFE news agency [Un muerto y ocho heridos tras una reyerta entre neonazis y antifascistas en Madrid y El joven asesinado en Madrid por otro de ideología neonazi será enterrado hoy, El Mundo].

The paper said it happened in a confrontation between neo-Nazi skinheads and the anti-fascist redskin gang, and began inside a metro train at the local station, when the victim was on his way with a group of friends to support immigrants at an anti-immigration protest called by the far right political organisation, Juventudes de Democracia Nacional.

El País newspaper said [Un fallecido y tres heridos graves en Madrid durante una reyerta entre neonazis y antifascistas] some of those involved in the confrontation between the two groups used self-defence sprays, and anti-riot police were brought in to control any further disturbances, both in Legazpi and at the next station in Usera.

They said five suspects were taken into custody, and a group of 300 were seen armed with sticks, stones and Molotov cocktails.

The autopsy on the body of the teenager, who died from a stab wound to the chest, will take place on Monday. He lived in Vallecas with his mother, and was an only child.

A 16-year-old Spaniard was killed when anti-fascists fought members of a small far right group inside the Madrid subway ahead of an anti-immigrant rally, police said today.

Carlos Javier Palomino was stabbed in the heart yesterday afternoon and about six people were injured as the rival groups fought with knives, pepper sprays and fire extinguishers inside a subway train and the Legazpi station, police said.

The man had been beaten by anti-fascists and taken to hospital after the incident, police said.

Hundreds of anti-fascists later fought police with sticks and molotov cocktails as they tried to stop the march by members of a youth wing of the small far-right National Democracy party.

The clashes follow racially motivated attacks in recent weeks on an Ecuadorean woman in Barcelona and a black African man selling DVDs in Madrid.

Spain’s immigrant population has quadrupled to four million or 10 per cent of the population since 2000, with the biggest groups coming from Latin America, Morocco and Romania.

A poll in the Publico newspaper today found 54 per cent of Spaniards considered the Socialist Government had done a bad or very bad job on the issue of immigration.

See also : lahaine.org for more… Local punks meanwhile, continue to drink, laugh at sing at local neo-Nazi venue The Birmingham, and police have confirmed that Melbourne Croatia Social Club has arranged for Thompson to come and play. (Next gig @ The Birmy: December 1, 2007, with The Boots, Donkey Punch, Sewer Cider, The Worst and Wot Rot.) Speaking of hating Jews… Vorchheimer’s attackers plead guilty, AJN, November 12, 2007, “TWO more footballers have pleaded guilty to verbally assaulting Menachem Vorchheimer as he walked home from synagogue in October last year. After a number of lengthy adjournments, James Bellarine Football League’s 2006 best and fairest winner Dalton and Matthew Cuthbert appeared in the Melbourne Magistrates Court on Monday morning to answer a range of charges. They will return to court for sentencing on Thursday. Cuthbert pleaded guilty to a charge of using insulting words in public. He admitted to saying, “I’m not going to apologise to no f***ing Jew.” Three other charges against Cuthbert were dropped. Dalton meanwhile, pleaded guilty to one count of offensive behaviour. The AJN understands that it was Dalton, the captain of the Ocean Grove Football Club, who snatched Vorchheimer’s kippah and hat from his head. Vorchheimer was walking with his children on Simchat Torah over 12 months ago when he was subjected to antisemitic abuse from a busload of young men who were leaving the Caulfield racecourse after a day out. Another player involved in the incident, Simon Christian was fined $1000 earlier this year after he admitted yelling “Go Nazis” at Vorchheimer, the son of Holocaust victims… Two men admit racially abusing Jewish man, The Age, November 12, 2007