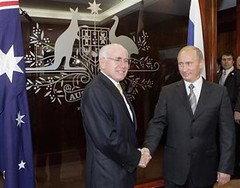 The savagery of war: A soldier looks back at Chechnya
The Independent
November 10, 2007

The war in Chechnya was one of the most brutal and senseless conflicts of modern times. Here, in an extraordinary piece of reportage, one young soldier provides an unsparing and sometimes disturbing account of life at the frontline | An extract from ‘One Soldier’s War in Chechnya’ by Arkady Babchenko

…The bodies keep on coming, a steady stream of them, and it seems it will never end. There are no more of the pretty silver bags. Bodies torn to pieces, charred and swollen, are brought to us in any state, in heaps. Some bodies are more than half burnt – we refer to these among ourselves as “smoked goods”, to the zinc coffins as “cans”, and to morgues as “canning factories”. There is no mocking or black humour in these words, and we say them without smiling. These dead soldiers are still our comrades, our brothers. That’s just what we call them, there’s nothing more to it than that. We heal ourselves with cynicism, preserve our sanity this way so as not to go completely out of our minds – we have no vodka to help us.

So we unload bodies, again and again. Our senses are already dulled, and we don’t feel pity or compassion for the dead. We are so used to mutilated bodies by now that we don’t even bother washing our hands before we have a smoke, rolling the tobacco in the Prima cigarettes with our thumbs. We don’t have anywhere to wash them anyway; there’s no water around and it’s a long way to run to the fountain every time.

We stop noticing living people, in fact we hardly see any. Every thing that’s living seems temporary to us, everything that leaves this runway, everything that arrives here in columns, and even those who have just been called up into the army, all of them will end up heaped on top of one another in the helicopters. They simply have no other choice. They’ll be starved of food and sleep, tormented by lice and filth, be beaten up, have stools smashed over their heads and be raped in the latrines – so what? Their suffering is of no importance; they’re going to get killed anyway.

They can cry, write letters and beg to be taken away from here, but no one will come for them, no one will pay attention to them, and all their problems are just trivia. A busted skull is better than this helicopter, of that we are now certain. We are also temporary, like everything else on the cursed field. And we will also die…

Tony Wood, ‘The Case for Chechnya’, New Left Review, No.30, November/December 2004 | Australia-Russia Nuclear Cooperation Agreement (DFAT, September 2007) | Who do they think they’re fooling? Angarsk, Ilya Borodaenko, and the IUEC | Until someone gets killed…

I live in Melbourne, Australia. I like anarchy. I don't like nazis. I enjoy eating pizza and drinking beer. I barrack for the greatest football team on Earth: Collingwood Magpies. The 2023 premiership's a cakewalk for the good old Collingwood.
View all posts by @ndy →
This entry was posted in History, State / Politics. Bookmark the permalink.