Who do they think they’re fooling? Angarsk, Ilya Borodaenko, and the IUEC

“Within days of a fatal neo-Nazi attack on anti-fascists participating in an environmental protest near Angarsk, Russia (Irkutsk region), three anti-fascists were attacked in Angarsk itself, according to a July 24, 2007 report by the Sova Information Analytical Center. The attack took place on July 23. Five youths beat up three anti-fascists while warning them not to testify against the neo-Nazis who have been detained in connection with the original attack on the environmentalists’ camp.

That same day, neo-Nazis tried to beat up a different anti-fascist activist in the regional capital of Irkutsk, and in a separate incident, around 15 neo-Nazis attacked a group of youths in the center of the city with gas-powered pistols. One young woman was injured. It is not clear if the latter attack had anything to do with the Angarsk incident.” 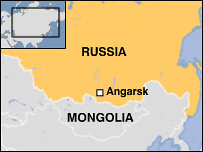 Angarsk is a small industrial town in south-eastern Siberia, established in 1948, and home to The International Uranium Enrichment Centre. The IUEC was established in May of this year, but was first announced by Russian President Vladimir Putin in July 2006, just prior to the G8 Summit in St Petersburg (see Sergei Kirienko Briefing Note Saturday July 15, 2006).

The Angarsk enrichment centre, would, according to … IAEA officials, be established in conjunction with Kazakhstan, which has copious supplies of natural uranium. The enrichment technology would, however, belong exclusively to Russia, officials in Moscow were quick to point out…

It is presumed that after the creation of the International Centre, countries that wish to develop nuclear energy will be able to obtain enriched uranium without using their own technology…

Radioactive waste – especially uranium hexafluoride waste – is produced during the process of enriching natural uranium, creating so-called uranium tailings. Over years of development of the Russian nuclear industry, thousands of tons of uranium hexafluoride waste have accumulated. A significant portion of this waste is already located on the territory of the Angarsk Electrolysis Chemical Combine (AECC), where the International Uranium Enrichment Centre is planned to be built. The Angarsk combine is located merely 30 kilometres from the Siberian city of Irkutsk and 100 kilometres from Lake Baikal, the world’s deepest lake… ~ International uranium enrichment plant in Siberia to attract more radwaste to Russia, Vera Ponomareva, Bellona, March 28, 2007

In addition to enriching uranium from Russia and the Glorious Nation of Kazakhstan, the Centre promises to Make Benefit Uzbekistan and a number of other countries, both now and in the future. According to Bellona, “potential partners… are Japan, India, Iran, and African nations” as well as South Korea. More generally, an analysis of the ‘International Outlook’ for ‘Nuclear Power in Russia’ by the Australian Uranium Association Ltd (Briefing Paper #62, July 2007) claims that:

Overall there is increasing acceptance of the need to press ahead with nuclear energy in Russia while expanding the country’s role internationally at both the front and the back end of the fuel cycle.

Russia’s future international role will be built on its reputation over the last decade as a reliable commercial provider of fuel-related services. It is now engaged with international markets in nuclear energy, well beyond its traditional eastern European client states. With the consolidation of western nuclear fuel cycle vendors, the competition may be welcomed.

President Putin’s Global Nuclear Infrastructure Initiative was announced early in 2006. This is in line with the International Atomic Energy Agency (IAEA) 2005 proposal for Multilateral Approaches to the Nuclear Fuel Cycle (MNA) and with the US Global Nuclear Energy Partnership (GNEP). The head of Rosatom said that he envisages Russia hosting four types of international nuclear fuel cycle service centres (INFCCs) as joint ventures financed by other countries. These would be secure and maybe under IAEA control. The first is an International Uranium Enrichment Centre (IUEC) – one of four or five proposed worldwide…

The pilot international enrichment centre (IUEC) was inaugurated at the end of 2006 in collaboration with Kazakhstan, and in March 2007 the IAEA agreed to set up a working group and continue developing the proposal. In April 2007 Armenia declared an interest in joining it. Ukraine is also reported to be interested. The centre is to provide new nuclear power states with assured supplies of low-enriched uranium for power reactors, giving them equity in the project, but without allowing them access to the enrichment technology. Russia will maintain majority ownership. IUEC will sell both enrichment services (SWU) and enriched uranium product.

The existing enrichment plant at Angarsk — the smallest of three Siberian plants — will feed the IUEC and accordingly has been removed from the category of “national strategic installations”. In February 2007 the IUEC was entered into the list of Russian nuclear facilities eligible for implementation of IAEA safeguards. Legislation is needed to separate the facility from the defence sector and open it to international inspection, as well as providing for a shareholding structure for other countries involved with the centre.

Development of the IUEC at Angarsk will be in three phases:

1. Use part of the existing capacity in cooperation with Kazatomprom and under IAEA supervision;
2. Expand capacity (perhaps double) with funding from new partners;
3. Full internationalisation with involvement of many customer nations under IAEA auspices.

As noted previously, in mid-July, and following a series of protests and representations to state authorities, a small number of environmental and peace activists, including members of Autonomous Action — Irkutsk and Baikal Environmental Wave, established a camp near the Centre in order to protest its development. The media reportage of the assault on the camp which soon followed is revealing, both for the manner in which even basic facts may be disputed, but also of the underlying ideological commitments which govern reporting. Thus the man murdered by the attackers, Ilya Borodaenko, is variously described as being 20 (Itar-Tass), 21 (RIA Novosti) and 26 (BBC) years old, while the camp itself is described as having been established by Autonomous Action, Defending the Rainbow (AP) and Antifa (BBC).

Intriguingly, after first claiming that the attack had no ‘political’ motivation and was a mere act of ‘hooliganism’, local authorities now appear to admit that the gang — or parts of the gang at least — had a political motive after all, and were in fact drawn from the local neo-Nazi milieu. That said, state prosecutors maintain that the motive for the attack was revenge for a previous assault on a local bonehead two weeks ago. Spokesperson Alexander Semyonov further insults the memory of Ilya by impugning both his and the camp’s credentials and motivations: an insult further compounded by Vladimir Slivyak, leader of a mob called ‘Ecodefense!’, who denies that the group attacked by the fascists had any right to claim any such motivation; an observation based, presumably, on the understanding that fascism is, in fact, compatible with ecological preservation. Perhaps not coincidentally, Slivyak claims his group will establish another protest camp in Angarsk later in the week…

A deadly assault on anti-nuclear protesters in Siberia over the weekend was a revenge attack against anti-fascists who beat up a [bonehead] two weeks ago, prosecutors said Monday. Thirteen suspects have been detained in connection with the attack, in which masked assailants armed with metal rods and baseball bats raided the protesters’ forest camp near the city of Angarsk early Saturday morning, Alexander Semyonov, spokesman for the Irkutsk Regional Prosecutor’s Office, said by telephone Monday. One activist, Ilya Borodayenko, 26, died of severe head injuries in a hospital a few hours later.

Witnesses said the attackers shouted nationalist slogans and identified their targets as members of the vocal anti-fascist group called Antifa. Semyonov said Antifa activists had beaten up a [bonehead] two weeks ago and that Saturday’s rampage was a revenge attack. Hostilities between [fascists] and Antifa activists throughout the country have been simmering in recent years, occasionally boiling over into violent encounters, video footage of which has been posted on the Internet.

Some of the 13 suspects have been charged with hooliganism and manslaughter, Semyonov said. Local police said 20 suspects had been detained, Interfax reported.

Two other activists were still being treated in a clinic Monday, Igor Kozlov of the group Autonomous Action, which organized the camp, said by telephone from Irkutsk. Kozlov said that around 20 activists had been protesting the Angarsk Electrolysis Chemical Plant and plans to make its operations international.

Russia is planning a uranium enrichment center at the plant, which has previously produced uranium fuel for nuclear power plants. Environmentalists say this will bring a massive increase in the amount of nuclear waste.

The authorities cast doubt on the victims’ environmental credentials, however. “When law enforcement officers examined the camp, no environmental activists were there,” Semyonov said. Furthermore, Semyonov said, some of the attackers probably lacked political motives and merely joined in spontaneously, noting that that they had taken mobile phones and personal belongings of the victims.

Kozlov dismissed Slivyak’s criticism, saying that being an environmental activist does not require being tied to a specific organization but rather depended on one’s personal convictions. “Our protest was clearly aimed at the Angarsk plant,” he said.

Slivyak said Ecodefense planned a much bigger camp, with up to 100 participants, at the plant later this week. His organization is considering moving the venue further away from Angarsk to reduce the risk of attacks, he said.

IRKUTSK, July 24 (RIA Novosti) – Police said Tuesday an attack on an environmental camp in southeast Siberia, which left one person dead and seven injured, was carried out by members of a local neo-Nazi group. Yet another suspect in the attack was detained Tuesday. Police said Monday they detained 20 suspects. Prosecutors have issued eight arrest warrants, and another five are pending. Police said earlier they are investigating the incident as “intentional grievous bodily harm resulting in death.” On Saturday, attackers wearing face masks and wielding baseball bats and metal rods raided a camp of environmental activists in the city of Angarsk, near Lake Baikal, who were there protesting nuclear waste processing at a Siberian chemical plant. Police said the suspects were young people under 22, primarily students and unemployed. There were 21 environmentalists in the camp. Environmentalists have previously protested against the state-owned Angarsk Electrolysis Chemical Plant, which processes uranium for the nuclear industry.

I live in Melbourne, Australia. I like anarchy. I don't like nazis. I enjoy eating pizza and drinking beer. I barrack for the greatest football team on Earth: Collingwood Magpies. The 2023 premiership's a cakewalk for the good old Collingwood.
View all posts by @ndy →
This entry was posted in Anarchism, Anti-fascism, Media. Bookmark the permalink.

2 Responses to Who do they think they’re fooling? Angarsk, Ilya Borodaenko, and the IUEC