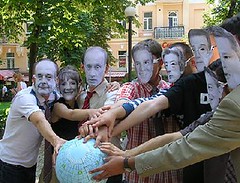 200 people, Russians and internationals, have been imprisoned in the last few days as the G8 Summit prepares to begin tomorrow. Despite a total government ban on any demonstrations, protests are held in Moscow, Kiev, St. Petersburg, and across the world. Bush is not expected to condemn Putin publicly for his actions against popular protest.

The Network against G8, and Berlin anti-G8 Media Group PRESS CONTACT in Russia:

As President Putin continues to speak about the improvements in democracy in Russia to the international press, the repression against activists goes on. It’s less than a day until the beginning of the summit and already over 200 activists of all stripes and colors have been detained, arrested, intimidated and even beaten. The number of violations against civil and human rights reaches more than one hundred.

A few Russian citizens, two Germans and one Swiss person have been convicted on the ground of ridiculous accusations with 10 to 15 days of imprisonment. Spurious charges have ranged from spitting or urinating on the ground, to charges of cursing the police, and in some cases there have been accusations that the police have planted drugs and even explosives on activists. Many have been spied on and stalked by police and FSB (ex-KGB) quite openly.

The Legal Team of the NOG8 group, despite the fact that their office was raided recently by police, reports many incidents. Until today they received hundreds of complaints about the restriction of free movement:

– threats and warnings, not to travel to St. Petersburg (26)
– forceful return of tickets (8)
– return tickets have been bought under pressure (4)
– people have been taken out of trains (86).

In 19 cases the right to gather in public space was restricted, 29 people have been detained by police on train stations in St. Petersburg on arrival, 8 were arrested without any reasons. The police entered 9 apartments without official juridical order. Nine passports were confiscated.

Hundreds of activists have had their papers checked on the streets of St.Petersburg. One example is the odyssey of the activist Alexander Lashmankin from Samara. His house has been searched and all his attempts to travel to St. Petersburg were met with detainment and arrest on his way by train, suburban train and while hitchhiking. Finally he was told by the police and the FSB that he won’t be able to reach St. Petersburg until the end of the summit. Now he is going home to Samara. Tomorrow he will have a press conference at 11:00 in Samara.

Another example is the threatening of relatives of activists, with one case being mother of the journalist Vlad Tupikin from Moscow. She was met by two policemen on the streets who then entered her apartment. They put pressure on the old woman to tell them about her son’s plans in St.Petersburg. After she refused to cooperate with them, she was warned about the consequences of her behaviour and future visits.

The third case is Vasilii Starostin, his son Jegor and another person from the Siberian Workers Union in Omsk, Elena Girde, who have been detained in Ekaterinburg, while they were traveling to St. Petersburg. After a long and heavy interrogation, where they were threatened with a court case for being involved in “extremist” activities, the police and FSB advised them to travel back to Omsk.

Jay Kayne of the Berlin anti-G8 Media Group said, “Despite the fact that all protest has been banned in Russia through [to] the end of the G8, numerous protests have been carried out. On 12 July a colorful Carnival against Capitalism occurred in Moscow. Today in Kiev, Ukraine, a demonstration with the motto “The World is Not a Commodity“ was carried out. An “illegal” protest is now planned for the final day of the G8. On the 16th of July there will be an Anti-War Demonstration in St.Petersburg. It will take place at 2pm near Nievski Prospekt Metro Station. Activists expect it to be interrupted by the police before this, because it’s not legal. We think President Bush is not expected to condemn Putin publicly for his actions against popular protest, as he has supported similar actions in the USA.” 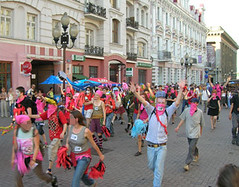