The Spanish Revolution and the English Literati 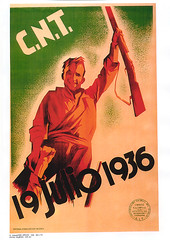 ‘For whom the bell tolled: Writers on the front line’
John Walsh
The Independent
July 15, 2006

The Spanish Civil War, which began 70 years ago, mobilised the literary elite. What made them put down their pens and take up arms?

…Did everyone agree that it was “a state of affairs worth fighting for”? In an unprecedented move, the opinions of the nation’s poets, dramatists, novelists and essayists were directly canvassed in a questionnaire. The idea was a joint effort by Auden, Spender and Nancy Cunard, the society hostess. Bluntly claiming “it is impossible any longer to take no side”, they asked (betraying their own sympathies a touch): “Are you for, or against, the legal Government and People of Republican Spain? Are you for, or against, Franco and Fascism?”

…Perhaps surprisingly, Orwell refused to participate, dismissing the questionnaire with: “Will you please stop sending me this bloody rubbish … If I did compress what I know and think about the Spanish war into six lines, you wouldn’t print it.”

After all this idealism, the comedown was painful. Many writers who enlisted with such high hopes returned disillusioned by the reality of life among the Republicans: the burning of churches in Barcelona, the torture and murder of bishops, monks, nuns and parish priests, the uselessness [sic] of the government under Manuel Diaz, the casual execution of political opponents, the shooting of anyone half-suspected of treachery.

There was no clarity about who were the good guys and who the bad. “Was there ever a people,” asked Robert Jordan, Hemingway’s alter ego in For Whom the Bell Tolls, “whose leaders were as truly their enemies as this one?”

…Spender wrote Poems from Spain, but was shocked by the International Brigade’s executions and left the Communist Party soon after. Orwell watched as the Communists turned on the POUM and seemed keener on suppressing other factions of the left, including Trotskyites and anarchists, than destroying fascism. “I suppose,” he wrote in Homage to Catalonia, “there is no one who spent a few weeks in Spain without being in some degree disillusioned. As for the newspaper talk about this being a ‘war for democracy’, it was plain eyewash.”

Needless to say, Orwell’s position on this question — “Are you for, or against, the legal Government and People of Republican Spain? Are you for, or against, Franco and Fascism?” — was not at all “surprising” if one understands Orwell, his experiences in Spain, his hostility towards Communism and its apologists on the British Left (his erstwhile “companions”) in particular. His response — “If I did compress what I know and think about the Spanish war into six lines, you wouldn’t print it” — is also understandable if one takes into account the many difficulties Orwell had in finding a publisher for his major work on the Civil War and Revolution, Homage to Catalonia.

Will you please stop sending me this bloody rubbish. This is the second or third time I have had it. I am not one of your fashionable pansies like Auden and Spender, I was six months in Spain, most of the time fighting, I have a bullet hole in me at present and I am not going to write blah about defending democracy or gallant little anybody. Moreover, I know what is happening and has been happening on the Government side for months past, i.e. that Fascism is being riveted on to the Spanish workers under the pretext of resisting Fascism…

But the chances are that you — whoever you are who keep sending me this thing — have money and are well-informed: so no doubt you know something about the inner history of the war and have deliberately joined in the defence of “democracy” (i.e. capitalism) racket in order to aid in crushing the Spanish working class and thus indirectly defend your dirty little dividends…

By the way, tell your pansy friend Spender that I am preserving specimens of his war-heroics and that when the time comes when he squirms for shame at having written it, as the people who wrote the war propaganda in the Great War are squirming now, I shall rub it in good and hard.

The thing that had happened in Spain was, in fact, not merely a civil war [Republican Goverment vs. Fascism], but the beginning of a revolution. It is this fact that the anti-Fascist press outside Spain has made it its special business to obscure. 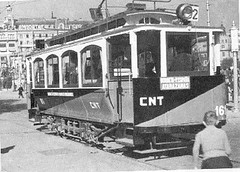 The Spanish war has probably produced a richer crop of lies than any event since the Great War of 1914-18, but I honestly doubt, in spite of all those hecatombs of nuns who have been raped and crucified before the eyes of Daily Mail reporters, whether it is the pro-Fascist newspapers that have done the most harm. It is the left-wing papers, the News Chronicle and the Daily Worker, with their far subtler methods of distortion, that have prevented the British public from grasping the real nature of the struggle.

The fact which these papers have so carefully obscured is that the Spanish Government (including the semi-autonomous Catalan Government) is far more afraid of the revolution than of the Fascists. It is now almost certain that the war will end with some kind of compromise, and there is even reason to doubt whether the Government, which let Bilbao fail without raising a finger, wishes to be too victorious; but there is no doubt whatever about the thoroughness with which it is crushing its own revolutionaries. For some time past a reign of terror — forcible suppression of political parties, a stifling censorship of the press, ceaseless espionage and mass imprisonment without trial — has been in progress. When I left Barcelona in late June the jails were bulging; indeed, the regular jails had long since overflowed and the prisoners were being huddled into empty shops and any other temporary dump that could be found for them. But the point to notice is that the people who are in prison now are not Fascists but revolutionaries; they are there not because their opinions are too much to the Right, but because they are too much to the Left. And the people responsible for putting them there are those dreadful revolutionaries at whose very name Garvin quakes in his galoshes — the Communists.

I live in Melbourne, Australia. I like anarchy. I don't like nazis. I enjoy eating pizza and drinking beer. I barrack for the greatest football team on Earth: Collingwood Magpies. The 2023 premiership's a cakewalk for the good old Collingwood.
View all posts by @ndy →
This entry was posted in Anarchism, Anti-fascism, History. Bookmark the permalink.