Update : The death of at least one environmentalist, a 20 or 21 year old comrade, appears to have been confirmed by agencies, and Russian authorities are already in denial, the catch-all crime of ‘hooliganism’ being applied in this case as it has been in the case of literally scores of other assaults by fascists. The real question, of course, given a previous assault upon the camp, and the fact that protesters were targeting a lucrative and highly sensitive nuclear industry development, is to what extent were authorities themselves aware of or implicated in the murder of the young man and the destruction of the camp? Obviously, such an investigation would best be handled by an experienced Russian investigative journalist, but thanks to other acts of ‘hooliganism’, they’re very thin on the ground in Putin’s Russia…

A criminal investigation has been launched into an attack on an environmentalists’ camp in Russia’s Irkutsk region. One man was killed during the assault, and several others were taken to hospital. The camp was established in July near the city of Angarsk to protest against nuclear waste re-processing at a local chemicals plant.

Maksim Nikulin, an environmentalist from the camp, says the attackers were [boneheads].

“Around 0500 local time [boneheads] attacked our environmentalists’ camp. They cried out fascist mottos. There were some 15 to 20 young men. They started to shoot from airguns. But everybody was asleep except the three on duty. Attackers also had clubs and stones. One man has died in a hospital and two are still in a grave condition. Around eight have been injured – some quite severely – and they needed doctor’s help. We expected such an attack, and on the night there were three men on duty instead of the usual two. But it didn’t help,” said the activist.

Eight demonstrators were hospitalized after the attack, one of whom later died from his injuries, according to the spokeswoman for the Angarsk city administration who was not authorized to give her name.

A criminal investigation had been opened in connection with the attack, she said.

More than 20 demonstrators had been camped out by a reservoir near Angarsk, about 4,200 kilometers (2,600 miles) east of Moscow, to protest nuclear waste processing at the state-owned Angarsk Electrolysis Chemical Plant, Russian news agencies reported, citing local police.

Two suspects in the attack have been detained and 13 others identified, the RIA Novosti agency reported [below], citing a local police source.

Police spokesman Valery Gribakin was quoted by the ITAR-Tass news agency as suggesting that theft had appeared to be a motive for the attack. Police confiscated a rucksack and a telephone that had belonged to the protesters from those detained, he said.

“Investigators are inclined to believe that the attack was motivated by hooliganism with the aim of stealing property,” he said.

Angarsk is located about 100 kilometers (60 miles) from the southern tip of Lake Baikal, the world’s largest freshwater lake and a symbol for some of Russia’s environmental heritage.

Russia is working to set up a uranium enrichment center at the electrolysis plant to enrich uranium from Kazakhstan.

President Vladimir Putin proposed setting up the center in 2006 as a way to provide uranium fuel to nations intent on building nuclear power plants while making sure they don’t develop weapons programs.

Enriched uranium supplied by the center would be made available only to countries which have undertaken the appropriate nonproliferation commitments. These would include a pledge of no use for nuclear explosive purposes and acceptance of International Atomic Energy Agency safeguards.

A Russian environmentalist was beaten to death and seven others wounded on Saturday when a group armed with iron bars and baseball bats attacked their camp near a nuclear waste processing plant in Siberia.

Russian media reported up to 15 people shouting fascist slogans attacked the environmentalists, who were living in the camp to protest against nuclear processing in the city of Angarsk near Lake Baikal, 5,000 km east of Moscow.

“One of the injured died in intensive care as a result of the attack,” Ekho Moskvy radio station quoted one of the environmental activists, Olga Kozlova, as saying.

Another resident of the camp, Marina Popova, said the attackers shouted slogans against anti-fascists.

“From that we can conclude they were Nazis or [boneheads]”, she told the Vesti-24 television channel, blood seeping through a bandage wrapped around her head.

Environmentalists have not previously been the target of violent attacks in Russia [NB. This is incorrect], where [boneheads] gangs have assaulted and killed people from ethnic and religious minority groups in the past.

Itar-Tass news agency said the man killed on Saturday was a 20-year-old from the far eastern port city of Nakhodka.

“Those arrested denied any involvement with any extremist youth group,” Gribakin was quoted by Ekho Moskvy as saying.

MOSCOW, July 21 (Itar-Tass) — The identities of 13 camp attack suspects have been established. Two of them are detained, the Russian Interior Ministry’s spokesman Valery Gribakin told Itar-Tass.

According to the Interior Ministry’s information, a group of about 15 persons attacked a camp of environmentalists near the Yelovskoye Reservoir in the municipal area of Angarsk at about 05:00 local time on Saturday morning. The attackers armed with wooden bats and sticks began to beat people in the camp. Eight were injured. One of them died in a hospital later, the spokesman said.

An official investigation into the case has been opened.

Best forces have been mobilised to investigate the crime, the spokesman noted.

Several versions are under consideration. However, a possibility that extremist youth group members committed the attack is ruled out. Neither the detained persons nor other suspects have any connection with such organisations, Gribakin said.

Everything will be done to solve the case. Leading investigators from the Irkutsk police department and specialists from the Interior Ministry’s main department for the federal district are in the group working at the site, he added.

5) One dead, seven injured in attack on environmentalists in Siberia
RIA Novosti
July 21, 2007

IRKUTSK, July 21 (RIA Novosti)) – One person was killed and at least seven were injured in an attack on an environmentalist camp in the Irkutsk Region in southeastern Siberia early Saturday, a local police source said. Police said at least 15 assailants raided a tent camp at the Yelovskoye Reservoir near the city of Angarsk occupied by a group of protesters against reprocessing of nuclear waste at a local plant. “The attack on a tent camp occurred at 5.10 am Moscow time (1.10 am GMT) Saturday. At least 15 attackers raided the camp occupied by 21 environmentalists,” the source said. A 21-year-old man was killed and seven people were hospitalized with injuries,” he said. Police said they have detained two suspects in the assault and identified at least 13 others. A criminal investigation has been launched in connection with the attack. 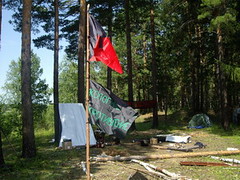 On July 21 at around 5am local time (July 20 9pm GMT) neo-Nazi skinheads attacked an anti-nuclear protest camp in Angarsk, Siberia. Established on July 15, the camp has previously been raided by police, and those involved apparently had some advance warning with regards to this latest assault, and made some arrangements for three people to guard it. In the event, however, the boneheads outnumbered those guarding the site by more than 3 to 1 and, armed with iron bars, knives and pneumatic pistols, were able to launch attacks upon people sleeping in tents. A number of victims had their arms broken, and at least two activists received serious wounds, one with fractures to his feet (and/or legs?) and the other to his skull: he later died in hospital(?). All camping tents were destroyed by arson, and in addition some personal belongings were stolen.

The camp was jointly established by Autonomous Action–Irkutsk and Baikal Ecological Wave. The phone number for the camp is +7924 621 2465.

Note that Australian comrades of the murderous boneheads in question will be gathering in Melbourne on October 13; note also that local ‘skinhead’ band Bulldog Spirit has recently declared its unequivocal support for local neo-Nazi venue The Birmingham Hotel.

I live in Melbourne, Australia. I like anarchy. I don't like nazis. I enjoy eating pizza and drinking beer. I barrack for the greatest football team on Earth: Collingwood Magpies. The 2021 premiership's a cakewalk for the good old Collingwood.
View all posts by @ndy →
This entry was posted in Anarchism, Anti-fascism. Bookmark the permalink.

2 Responses to Neo-Nazis attack environmental protest camp in Siberia; murder one, wound others