Statement from survivors of fascist assault in Siberia

Update : In keeping with the general role of state/corporate media in Russia, Itar-Tass has reported that local police have declared that there was no political motivation for the murder of Ilya Borodaenko, nor for the assaults as a whole (Young man killed, seven injured in attack on environmentalists), which were committed by hooligans. The article proceeds to state that Rosatom, the Russian state agency which manages the Russian nuclear industry, is shocked at the murder, and that the uranium enrichment facility at Angarsk is completely safe and always has been. Igor Domnikov, Sergey Novikov, Iskandar Khatloni, Sergey Ivanov, Adam Tepsurgayev, Eduard Markevich, Natalya Skryl, Valery Ivanov, Aleksei Sidorov, Dmitry Shvets, Paul Klebnikov, Magomedzagid Varisov and Anna Politkovskaya were not available for comment, as they are all dead. Russian police have promised to get to the bottom of who was responsible for the murder of Borodaenko just as soon as they’ve established who was responsible for the murder of the thirteen journalists…

UK Indymedia appears to be the best source for info: Activist Killed As Nazis Attack Anti-Nuclear Camp In Siberia 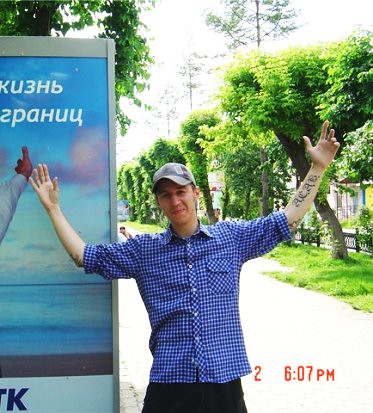 On July 21 at dawn our camp was brutally attacked. Some scumbags suddenly tumbled down our tents, burned down and stole our things, beat us sleeping in our tents with bats, hammers, cudgels, legs. The same time they were spitefully swearing at Antifa. The terrible and considered cruelty of their attack makes no doubt that it was not a work of some ordinary hooligans, but a thought over action of nazis. It is necessary to note a long (more than half an hour) absence of the police at a place of the crime, and the subsequent attempts of the police to deny an existence of nazi groupings in Angarsk, and pressing requests of the representatives of the police and the Office of Public Prosecutor to participants of the camp not to make a scandal and to avoid any communication with journalists. But we can not be silent because an indignation and a desire of a retribution overflows us. Last night we have lost our comrade: Ilya Borodaenko [pictured above], an anarchist, a member of the Autonomous Action from Nakhodka has died because of a craniocerebral trauma (incompatible with life) and violent beating. That night he and two other participants of the camp were on duty and Ilya was the first who faced nazi scum. Some [of] our comrades were sent to the hospital in grave condition (with concussions of the brain and fractures of arms and legs). Our tents are cut and fired, flags are stolen.

However we will forget nothing and we won’t forgive Ilya Borodaenko’s death to his murderers (irrespective of successes or failures of the official repressive system investigating the crime). We won’t stop activity of our environmental protest camp, we won’t stop our struggle against fascist plague and nuclear mafia, against [authoritarian] ideas and racist dregs, against all that destroys both the nature and human life and dignity. Today we grieve. Tomorrow we will continue our struggle.

MOSCOW, July 21 (Reuters) — A Russian environmentalist was beaten to death, and seven others were injured Saturday when a group with iron bars and baseball bats attacked their camp near a nuclear waste processing plant in Siberia. The Russian news media reported that up to 15 people shouting fascist slogans attacked the environmentalists, who were living in the camp to protest nuclear processing in Angarsk, a city near Lake Baikal, more than 3,000 miles east of Moscow. The Angarsk plant was chosen last year as the site for a new uranium enrichment facility. The Russian nuclear regulatory agency condemned the attack. Environmentalists have not previously been targets of violent attacks in Russia, where skinhead gangs have assaulted and killed people from ethnic and religious minority groups in the past. The Itar-Tass news agency said the man killed Saturday was a 20-year-old from Nakhodka, an eastern port city. A spokesman for the Interior Ministry, Valery V. Gribakin, said that 13 suspects had been questioned and four people had been arrested. 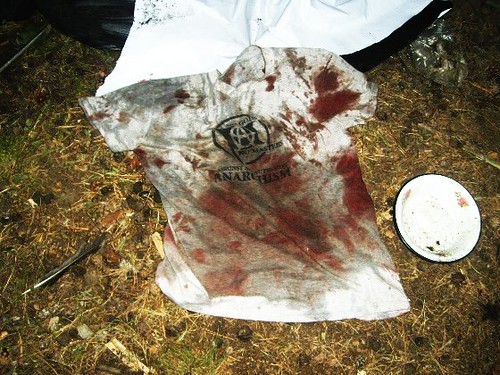 I live in Melbourne, Australia. I like anarchy. I don't like nazis. I enjoy eating pizza and drinking beer. I barrack for the greatest football team on Earth: Collingwood Magpies. The 2021 premiership's a cakewalk for the good old Collingwood.
View all posts by @ndy →
This entry was posted in Anarchism, Anti-fascism. Bookmark the permalink.

2 Responses to Statement from survivors of fascist assault in Siberia