According to corporate/state media reports, perhaps as many as 400 neo-Nazis were unable to march through the Jewish quarter of Prague today, on the 69th anniversary of Pogromnacht / Kristallnacht. Despite being joined by reinforcements from das Vaterland — German neo-Nazis, lured to Prague by their Czech Brüder calls to do the timewarp (again) — the assembled pinheads were unable to do much more than become targets for the police and antifa: “The members of the Young Nationalist Democrats (MND) received backup from two busloads of German supporters. The clashes broke out after one of the young fascists used pepper spray against one of the anarchists. The anarchists then attacked the neo-Nazis, injuring one of them. Two other activists were injured in other incidents…” (Anti-fascists block Nazi march in Prague’s Jewish Quarter, Yehuda Lahav, Haaretz, November 11, 2007). Other reports state that the attack was made by a bonehead using an airgun.

In general, it appears that a massive police presence prevented large clashes, and those that did occur took place in less heavily-policed areas between smaller, roving groups of neo-Nazis and antifa. “In a major clash downtown, a group of about two dozen neo-Nazis was attacked by people who said they were in the streets to prevent the march, [police spokesman Ladislav] Bernasek said. About 50 left-wing extremists attacked police with cobble stones in another area. In total about 80 people were detained around the city, including 10 German-speaking left-wing extremists armed with sticks, Bernasek said” (Neo-Nazi March in Prague Leads to Clash, Karel Janicek, AP, November 11, 2007). While the ABC erases the anarchist presence in opposition to the scum, the Romany press in the Czech Republic is more straightforward:

‘Anarchists clash with neo-Nazis during Prague Jewish Quarter march’, November 10, 2007, (ROMEA/CTK): “Neo-Nazis clashed with anarchists at Faculty of Law on the edge of the Jewish Quarter in Prague today, there are probably injured people. The riot police pushed some of them back while others used the situation to provoke a brutal clash. The brawl was allegedly started by the anarchists of whom there were several times more than of the neo-Nazis. Novinky.cz server reported, however, that the incident was triggered by a neo-Nazi who shot from a gas pistol into the crowd and lightly injured one person. Anarchists attacked and beat him up…”

A report in The Independent is more detailed, and reveals that the boneheads’ attempt at (re-)creating a fascist spectacle on the streets of Prague met with some very hostile reviews:

Clashes in Prague’s Jewish Quarter on anniversary of Krystalnacht, Dinah Spritzer, November 11, 2007: “Dozens of neo-Nazis clashed with thousands of anti-fascists at the border of Prague’s Jewish Quarter yesterday on the anniversary of Krystalnacht, the 1938 Nazi attack on Jews and Jewish property in Germany. Two neo-Nazis lay in a thick pool of blood in front of the Charles University Law Faculty after being kicked and beaten by a group of German anarchists. A masked spokesman for the anti-Fascist movement said his group had assaulted at least 12 other neo-Nazis in the city centre. The police, however, said only six were injured and 50 were arrested, mostly on weapons charges…

“In the 1930s nobody in Europe took these small bands of fascists seriously and look what happened,” said Alena Hladkova, 33, who turned up to the counter-protest. “So the neo-Nazi movement might be small, but we need to show them they cannot dare desecrate the memory of the Holocaust,” she said…” 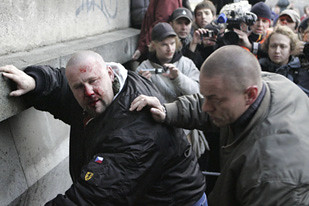 In other bad, but rather amusing news for the far right in Europe, the fascist ITS (‘Identity Tradition Sovereignty’) tendency in the European Parliament has collapsed, following candid remarks by the granddaughter of an upside-down corpse, Italian MEP Alessandra Mussolini, regarding the proclivity of primitive Romanians to commit crime: “Breaking the law became a way of life for Romanians. However, it is not about petty crimes, but horrifying crimes, that gives one goose bumps.” Tinpot fascists in Romania have threatened to withdraw their members from the IST unless Mussolini apologises: “This would allow the group to continue to fulfill EU parliament rules stipulating that all political groups have a minimum of 20 members from at least six member states. The group currently has 23 members. If it collapses, members of the ITS would lose a range of political and financial privileges such as speaking time, extra staff and places on overseas delegations” (Cat Fight on the Far Right, Spiegel Online, November 9, 2007).

I live in Melbourne, Australia. I like anarchy. I don't like nazis. I enjoy eating pizza and drinking beer. I barrack for the greatest football team on Earth: Collingwood Magpies. The 2021 premiership's a cakewalk for the good old Collingwood.
View all posts by @ndy →
This entry was posted in !nataS, Anarchism, Anti-fascism, State / Politics. Bookmark the permalink.