MELBOURNE’S Croatian community is under fire for hosting a rock concert for neo-Nazi skinheads, publishing anti-Semitic material on the internet and naming a building after fascist Croatian dictator Ante Pavelic.

The Melbourne Knights Soccer Club yesterday launched an extraordinary attack on its social arm, the Croatia Social Club, for hosting the October 13 concert by groups that incite violence and attacks against Jews and other minorities. “I am deeply disturbed that the good reputation of our football club has been tarnished by the social club’s incompetence,” Knights chairman Matt Tomas said.

The concert at the Knights’ North Sunshine complex was headlined by US neo-Nazi band Final War. The band describes itself as “defenders of the Reich”, and its songs boast: “We fight Jews”.

Australian skinhead band Fortress also played. Its song, Parasites, urges repatriation of immigrants: “If they don’t f..king like it, it’ll be in body bags”.

The concert was organised by the Australian chapters of neo-Nazi skinhead groups Blood and Honour and Southern Cross Hammer Skins. Group members in the US and Europe have been convicted of assaults, bombings and murders.

Anti-Semitic messages from the Knights’ Croatian fans are posted on the Knights Army Forum website. One posting says Jews would “sell their mothers for a dollar”.*

Melbourne campaigner Cam Smith said anti-racism activists alerted the Knights to the nature of the concert several hours before it started. “As soon as we found out, we contacted whoever we could at the Knights through phone numbers on their website,” Mr Smith said. “They weren’t interested. One of their people asked one of our people if he was a dirty Jew.”

Mr Tomas said he did not know who was attending the concert, but he would investigate Mr Smith’s claim that Knights members were contacted, adding: “I don’t associate with that sort of scum. I’m utterly disgusted about this.”

Mr Tomas said the concert was approved by the Croatia Social Club, a separate legal entity to the football club.

Contacted by The Weekend Australian, social club manager Catarina Malacic denied the event was held. “There was nothing on at the venue that night,” she said.

Later, club committee member Ivan Skunca confirmed the premises were booked for a concert, but said the club did not know who made the booking. “It was a mistake. Perhaps we had an obligation to check these people out and we didn’t. We apologise for that.”

B’nai B’rith Anti-Defamation Commission director Manny Waks said he was disturbed the concert was held in view of links between the Croatian community and neo-Nazi elements.

Mr Waks said the Croatia Club — a separate entity to the Knights’ social club — had ignored Jewish protests against the naming of its Footscray hall after Ustashi Nazi collaborator Ante Pavelic, who was responsible for the slaughter of 700,000 Serbs, Jews and Gypsies.

* Note that, while the Forum administrators have recently deleted a thread dedicated to discussing the gig, another thread includes the following comments, made in reaction to reports in the Jewish press that at a concert in Zagreb by Croatian rock * Thompson, large numbers of his fans greeted him with the fascist salute (Jews slam Croatia’s failure to condemn ‘Nazi’ concert, EJP, June 17, 2007):

1) cantona : “Dunno about you guys, but after reading that – it makes me wanna go to a [Thompson] concert and make fascist salutes even more! [Z]a dom!” (NB. The Ustaše greeting was “Za dom – spremni!”. Salute: Za dom! For home(land)! Reply: Spremni! (We are) ready!)
2) Imocanka : ‘”Hundreds of thousands of Serbs, Jews, anti-fascist Croatians, Gypsies and others were killed by the Ustasha in the Croatian concentration camps.” [S]o we get condemned for doing the world a favour. [Anyhow], how do they actually know what we yell out at our concerts? [T]hey don[‘]t understand, it[‘]s all speculation[.]’
3) Bogdan Bonk : “Chelsea [Hajduk] are playing Caufield in this week[‘]s round. They are a [J]ewish club, so because of that they have to play on a Sunday. Every other game of the year is on [S]aturday, but because their [sic] Jewish, they play only on [S]undays. They want everything their own way! [H]itler = answer[.]”
4) Falcon Freak : “And the Jews wonder why so many people hate them…”

In the meantime, Thompson (Marko Perkovic) is playing to packed houses in New York:

Marko Perkovic is taking the stage November 2nd to literally sing praises of the Holocaust. The Croatian rocker goes by the stage name Thompson (for the American-issued Thompson sub-machine gun he carried as a soldier in the Croatian war)—and sings about the Ustaše, the Croation pro-Nazi regime that sent Jews, Serbs and Gypsies to concentration camps during WWII. The folk-metal musician is often greeted by audiences with a Nazi salute. He’s been kicked out of Canada and the Netherlands for hate speech, only to be welcomed by Manhattan’s own Croatian Center in Midtown…

Many fans deny Thompson is a fascist creep. Melbourne Croatia Social Club manager Catarina Malacic denies a neo-Nazi gig was held at the MCSC on the night of October 13. Others — like Welf Herfurth of the neo-Nazi New Right — deny that there was a Holocaust / Shoah… 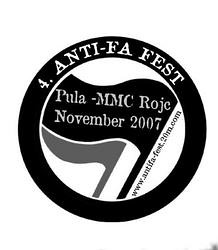 I live in Melbourne, Australia. I like anarchy. I don't like nazis. I enjoy eating pizza and drinking beer. I barrack for the greatest football team on Earth: Collingwood Magpies. The 2023 premiership's a cakewalk for the good old Collingwood.
View all posts by @ndy →
This entry was posted in Anti-fascism, Music. Bookmark the permalink.