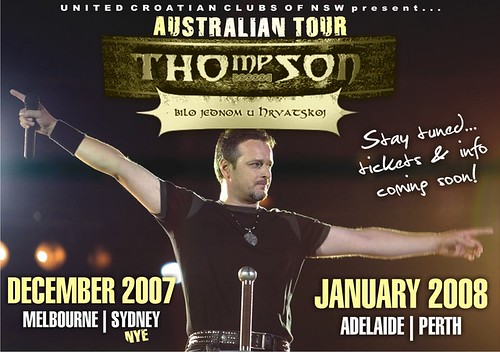 Tommy gun — you better strip it down for a customs run
Tommy gun — waiting at the airport ‘til Kingdom Come
An’ we can watch you make it on the nine o’clock news
Standing there in Palestine lighting the fuse
Whatever you want, you’re gonna get it

Tommy gun — a-you’ll be dead when your war is won
Tommy gun — but did you have to gun down everyone?
I can see it’s kill or be killed
A nation of destiny has got to be fulfilled
Whatever you want, you’re gonna get it

Tommy gun — a-you can be hero in an age of none
Tommy gun — I’m cutting out your picture from page one
I’m gonna a get a jacket just like yours
An’ give my false support to your cause
Whatever you want, you’re gonna get it
All right!

Okay, so let’s agree about the price
An’ make it one jet airliner for ten prisoners

Boats and tanks and planes, it’s your game
Kings and queens and generals, learn your name
I see all the innocents, the human sacrifice
And if death comes so cheap, then the same goes for life

I live in Melbourne, Australia. I like anarchy. I don't like nazis. I enjoy eating pizza and drinking beer. I barrack for the greatest football team on Earth: Collingwood Magpies. The 2020 premiership's a cakewalk for the good old Collingwood.
View all posts by @ndy →
This entry was posted in Anti-fascism, Music. Bookmark the permalink.

47 Responses to Tommy On Tour