See also : Who are the Soldiers of Odin?, Kieran’s Review, October 10, 2016 | An Anti-Muslim Vigilante Group Is Roaming The Melbourne CBD Pledging To “Keep Our Streets Safe”, Tom Clift, Junkee, October 10, 2016.

Several months after they began parading around the Melbourne CBD, The Age has taken notice of the Soldiers of Odin. See : Vigilante-style group Soldiers of Odin patrolling Melbourne CBD, Chris Vedelago and Cameron Houston, October 10, 2016. According to The Age: “The Soldiers of Odin appear to operate similarly to the Guardian Angels network, founded in New York City in 1979 to patrol the subway system amid growing crime rates.” I would suggest that a better model would be the street patrols of Greek neo-Nazis Golden Dawn. Be that as it may, a few points:

• The SOO were founded in October 2015 by Mika Ranta, a Finnish neo-Nazi activist with links to the Suomen vastarintaliike or Finnish Resistance Movement (FRM), the local branch of neo-Nazi grouplet Nordic Resistance Movement. Like others belonging to SOO, Ranta has a violent criminal record.

• Members of the FRM are allegedly responsible for the recent killing of an anti-racist activist, 28-year-old Jimi Karttunen: “The man arrested in connection with assaulting a man to death at the Helsinki Central Railway Station is a key figure in the Finnish Resistance Movement (SVL), confirmed the police. A passer-by was beaten up outside the Helsinki central railway station where the Finnish Resistance Movement was holding a demonstration on September 10. The man succumbed to his injuries at the Helsinki Meilahti hospital on September 16” (Helsinki murder suspect key figure in SVL, FTimes-STT Report, September 21, 2016). His murder sparked a massive protest in Helsinki, one of the largest in recent memory.

• Since its formation in Finland, the SOO — rather like the (now largely-moribund) English Defence League — has expanded to a number of other territories, including Canada. Anti-Racist Canada has exhaustively documented SOO’s links to neo-Nazism and criminal violence.

• The leader of SOO in Melbourne is Jay B Moore. Like other Soldiers, Moore has an association with other patriotik groups, in particular the Patriots Defence League of Australia (PDLA). Below he’s pictured at the joint Reclaim Australia/United Patriots Front (UPF) anti-Muslim rally in Melton in November 2015 and at the UPF rally in Bendigo in February 2016 sporting PDLA merch. (Another member of the SOO, Cam ‘Moody’ McCann, was present at the Reclaim Australia rally in Melbourne in April 2015 in the company of a small clutch of neo-Nazi methgoblins.) Given the apparent collapse of the PDLA, it makes sense for Moore and others to have hitched their wagon to yet another anti-Muslim vehicle; an ever-present dynamic within the broader milieu. Or: same shit, different pile. 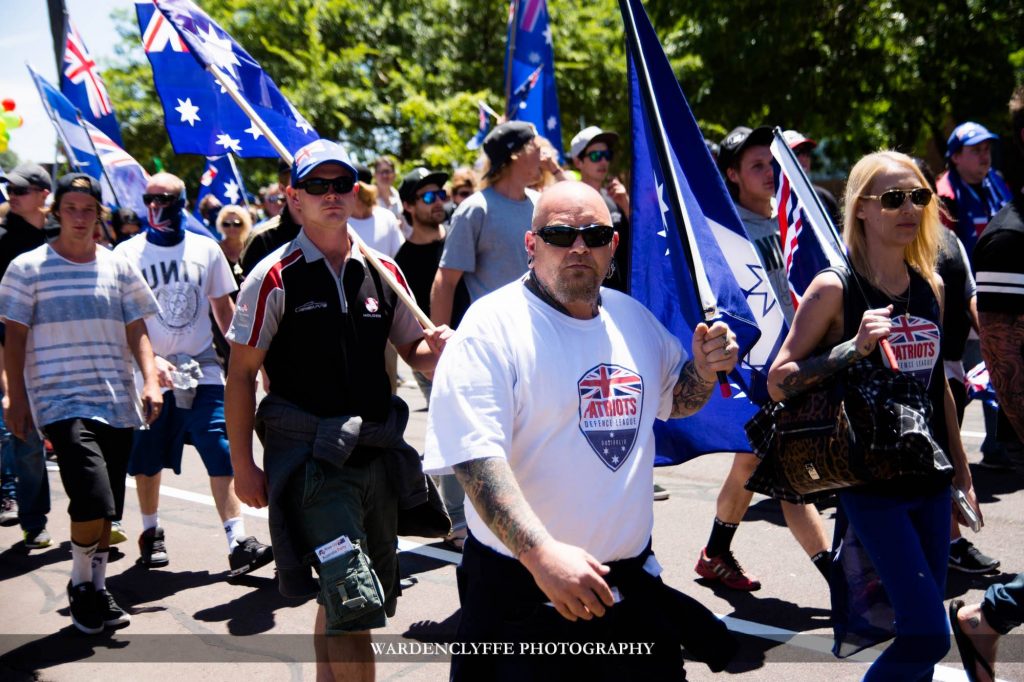 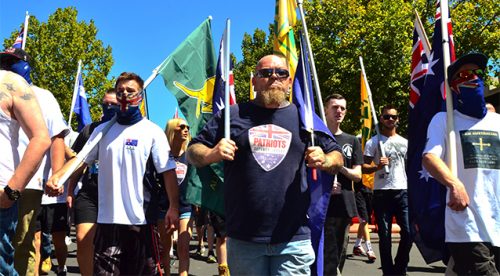 • While the meatheads belonging to SOO are obviously more attracted to the bells, whistles and uniforms, the association between Odinism (and other forms of esoteric religion), fascism and neo-Nazism extends back many years, including in Australia, and most especially by way of Alexander Rud Mills (1885–1964). His peculiar beliefs are examined in ‘Skeggold, skalmold; vindold, vergold’: Alexander Rud Mills and the Asatru faith in the New Age (Australian Religion Studies Review, Vol.12, No.1, January 1999) while his (Nazi) political beliefs are examined more closely in David S. Bird’s Nazi Dreamtime: Australian enthusiasts for Hitler’s Germany (ASP, 2012). See also : Black Sun: Aryan Cults, Esoteric Nazism, and the Politics of Identity by Nicholas Goodrick-Clarke (2002). Anti-Fascist News provides some more recent accounts of the relationship between neo-paganism and the far right on its site here; it’s also worth noting that other ‘heathens’ reject racism and fascism. See : Heathens United Against Racism.

• The SOO joined the True Blue Crew (TBC) and UPF at their anti-Muslim rally in Melton in August this year at which members of the TBC and SOO clashed. The TBC eventually booted the SOO from Melton, with most of their animosity seemingly being directed at SOO President Jay B Moore. Despite this, the SOO — minus including Moore — joined with the TBC at an anti-refugee rally in Eltham on October 1. 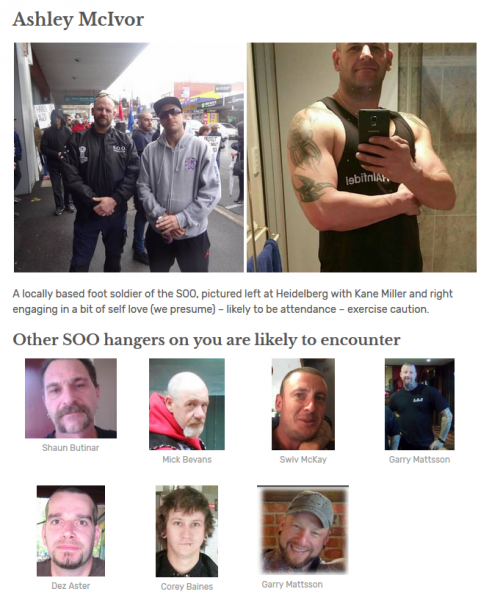 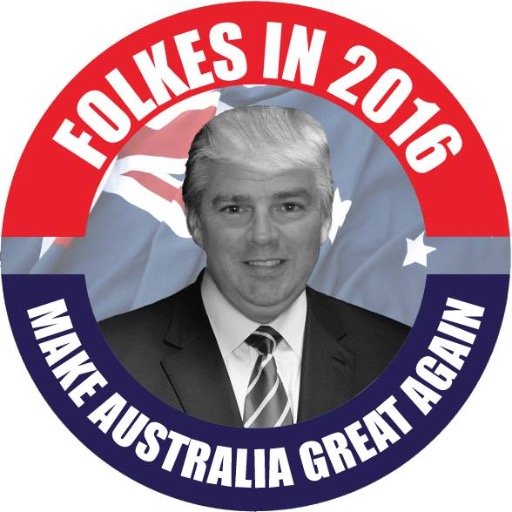 The Party for Freedom (PFF) is holding another anti-refugee rally in Eltham on November 5. The ostensible target of their ire is St Vincent’s Care Services, which has recently won a contract to provide housing to something in the order of 100 Iraqi and Syrian refugees. St Vincent’s has published a fact sheet explaining the initiative here [n/a].

In response to this rally and the rally of October 1 a new group has formed: Diamond Yarra Valley Resistance Solidarity (DYVRS). On the DYVRS blog it notes that a majority of those present at the rally on October 1 were drawn from the TBC, SOO and other satellites; the Soldiers, the Crew, the UPF, the PFF and All The Usual Suspects (even Ralph Cerminara!) have announced their intentions to return on November 5, making it a fun day for the whole racist family. Those unhappy at the prospect of another assembly of racist and fascist bigots should follow DYVRS for more announcements.

FTR, Benson & Hedges and the Southern Cross Hammerskins are holding their annual Ian Stuart Donaldson memorial gig this weekend in Melbourne. The event commemorating the death of the Skrewydriver has been held every year for the past two decades with only occasional fanfare in the media — even the massacre conducted by Hammerskin Wade Michael Ppage at a Sikh temple in Wisconsin 2012 barely registered in Australia. In any case, their cheeky kameraden in the UK managed to fool keen-eyed and whip-smart Cambridgeshire Police a few weeks ago as ‘Hundreds of people attended a neo-Nazi rally that was not opposed by police in the belief it was a charity event’ LOL (Cambridgeshire neo-Nazi rally allowed as ‘charity’ event, Sally Chidzoy, BBC, October 6, 2016).