Update (October 15) : I haven’t linked to the many online discussions re D666 or to anecdotal accounts of their shows attracting nazis. But I will post this extract from an interview with local comedian Aamer Rahman about his experience at a D666 show back in 2003.

Black/death/thrash heavy metal band Deströyer 666, which originally formed in Australia over two decades ago, are touring the country in November. The tour comes on the heels of the release of their new album Wildfire (on French label Season of Mist — you can read a hostile review here); their first since 2009’s Defiance (also on Season). The band is playing the following dates and venues:

Back in July, the band copped some heavy criticism on the Metal Sucks website, which called them ‘racist douchebags’, and in a series of three articles — since removed from the MS site — made various claims about the band and in particular its lead singer, KK Warslut (AKA Keith Bemrose), concluding that, inter alia, Keith is a ‘proven racist, misogynist and asshole’ who has ‘alarmingly racist, misogynistic and violent tendencies’. (The deleted articles were titled ‘Deströyer 666’s Set at Denmark’s Metal Magic Fest Marred by Fight Between the Audience and the Band’, July 11, 2016; ‘Deströyer 666: Officially Racist D-Bags’, July 12, 2016; ‘Deströyer 666 Frontman K.K. Warslut Digs in on Racist Comments at NYC Show’, July 15, 2016). On July 18, the site published an ‘apology’ to the band — this too has been deleted.

At the time, I made the mistake of sharing one of the articles on my Facebook page. This apparently triggered two of the band’s local fanboys. 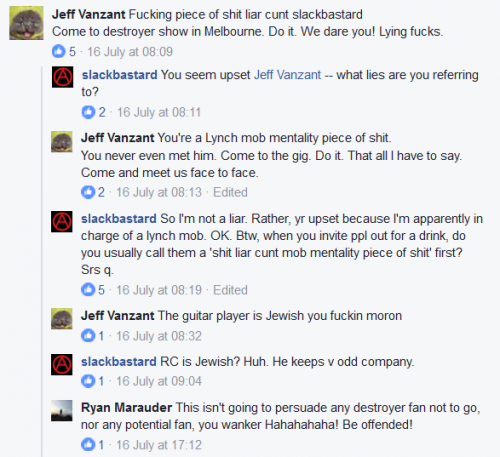 So what’s all the fuss?

The publication of the articles sparked a virtual storm in a verymetal teacup, and mostly assumed the forms you’d expect, ie, HAILS! from fans, tut-tutting from critics, and bemusement on the part of the rest. The fact that Keith and D666 have a deliberately kvltivated reputation for being meanies seems to have escaped most commentators, as has the fact that his shtick forms an important part of his appeal (among the band’s fanbase, at least). One site that attempted to provide a more nuanced response was ToiletOvHELL: On Threats, Censorship, and Destroyer 666 (July 19, 2016).

I’ll try my best to lay out a timeline here: On July 9th, a drunk KK spent a good amount of time on stage at Metal Magic festival in Denmark expressing his hatred for the audience. He was particularly “sick of” the men, who had descended from Vikings, but were now living in a “matriarchal” society. He also became outraged at a concertgoer in an Antifa mask, but in fairness, that outburst was far more understandable due to the militant nature of the Australian left-wing extremist group, who tends to default to immediate violence themselves. Several fans jumped on stage at different times in an attempt to fight KK, who had to be held back himself. Luckily, their set ended without violence. This unprompted display of misogyny resulted in perplexed coverage from a few metal websites; Metalsucks paired it with a discussion of KK’s Nazi-associated tattoos, his identification of the white wolf (which is standing over its mutilated brown prey) on their Unchain The Wolves album as “the spirit of the white man,” and his former membership in the openly racist band The Raven’s Wing.

In which context, a few things:

• Keith’s concerns about The Emasculation Of Danish Society are kinda silly, while his drunken antics can be read in at least one of two ways: a) he acted in ways he wouldn’t when sober; b) in his inebriated state, the filter that would normally separate his bRanes from his mouth wasn’t working very well, and so he expressed himself more crudely than he would otherwise. In either case, his views about the threat posed to Men by Feminisms is reasonably widely-shared, and not only among metalheads …

• According to Keith, speaking in another interview (Bardo Methodology, July 27, 2016), the so-called ‘antifa’ who jumped on stage to pick a fight was just Some Guy in a mask: ‘As it turns out, this clown was no left-wing extremist at all; just an idiot who thought it would be cool to wear a mask to a show. I believe the common term for such types is twat.’

• It seems a bit odd to link this incident to an article in The Sydney Morning Herald on Those Mysterious Antifa, especially as D666 is now based in Europe. A more relevant link would be to the ambush of Polish NSBM band Tormentia … but that’s another story.

• Keith does have a ‘Nazi’ tattoo on his tummy — the Wolfsangel or Wolf’s Hook. In his interview with Bardo Methodology (cited above), Keith reckons he got it because he likes wolves ‘n’ shit — and besides, it’s an ancient rune.

• Keith’s quip about the wolf on the cover of the band’s 1997 album Unchain The Wolves occurred during a radio interview on 3RRR’s The Hard Report in June of the same year. You can read more about that interview here.

• Asked about Raven’s Wing, Keith (Bardo Methodology) says: ‘What a fuckin’ joke. I challenge anyone to find a single phrase on that album (“Through the Looking Glass”, 1997) that denigrates any race’, adding that ‘I respect all ethnicities, my own included. I believe that all peoples deserve respect and access to live as they wish in their own homelands – without outside influence or coercion.’ For the record, the Raven’s Wing album Through The Looking Glass was recorded for German neo-Nazi label Destiny Records. Originally released in 1997, it was re-released by Rock-O-Rama in 2008, and featured the talents of Keith, ‘Aussie’ Nigel Brown and Mark Costello (AKA ‘Coz’ and ‘Howitzer’) on drums. The chief vocalist on the projekt was Scott McGuinness, better known as the singer for neo-Nazi reich ‘n’ roll band Fortress. Leaving aside the lyric content — mawkish laments for a better, Whiter Australia and tributes to The White Man’s Struggle, for the most part — it beggars belief that Keith was unaware of the nature of the recording. In any case, while Fortress is defunct, Brown apparently now resides in the Netherlands and occasionally performs live at ‘Rac’n’Roll Place’ in Veendam:

Veendam is about an old gym just outside the center, where a portion from July 2014 was opened as a tavern. Martin pivotal figure of the grind (1969) from Winschoten has been running for over thirty years around in the extreme right scene and this gym has been converted into ‘Rac’n’Roll Place’. Here is sold as in Ravenstein drink and far-right propaganda material distributed. As the southern Nationalist Flemish guests also pulling know, so Rac’n’Roll Place focuses successfully on German sympathizers. The difference between these spots is that there are gatherings take place more often in Veendam, where significantly more visitors coming. There is also a space where archery, strength training and kickboxing can be practiced. Furthermore they occasionally musicians, such as the Australian guitarist Nigel Brown (1967). Brown has played in a number of imaginative Nazi bands and was sentenced in Australia to nine months’ imprisonment for ‘gay bashing’. In 1995 he takes in the North Holland village Zwaag a CD with his band Celtic Warrior. During this recording, the band members were arrested by police. Two years later, Brown was sentenced to a fine of 1500,- for insulting Jews. In the old&new party which 2014 ended the visitors could admire Rac’n’Roll Brown a fee of € 15,- entree.

• While Keith’s status as a ‘neo-Nazi’ is questionable, and it seems he rejects the term, it appears equally obvious that he shares at least some of their views regarding the natural *cough* order of things, and provides at least tacit support for the concept of a Safe European Home for Whites. That said, the recordings he’s made and the associations he’s had over the last two decades seem just as much social as they are political. Partly, this is a product of sharing common origins with the Whyalla thrashers of the 1980s, with Keith doing time in Corpse Molestation, Bestial Warlust and D666; Rob ‘Death Dealer’ Currie in Vomitor and Spear of Longinus; Mark ‘Howitzer’ Costello in D666 and Gospel of the Horns; Brad ‘B.C.’ Chung in Corpse Molestation, Vomitor and Razor of Occam; and Matt ‘Razor’ Schneemilch in D666 and Razor. In other words, it’s a close circle of Happy Metal Friends (which happens to include neo-Nazis).

This brings us to July 17th. Destroyer 666 posted a long tour wrap-up on Facebook, and spent most of it calling out metal blogs and SJW culture (ah yes, the old standby attack). In a truly deplorable display, KK railed against Blair Hopkins, calling her a “little lying dishonest whore.” He accused her of being “more intent on advertising her attractiveness to drunks than she was in writing an honest review.” Then, switching to a second person narrative (while drastically upping his typo-per-sentence rate), he finished with “Clearly your insecure about your looks woman and felt a burning desire to advertise just how irresistible you are.To drunks.Sad desperate bitch.”

These are not very nice things to say in response to a review, but do seem to accurately reflect Keith’s approach to critics.

Next, and most deplorably (although finding new lows seems difficult at this point), he targets the editors of Metalsucks. Like several other metal blogs (and grown men who call themselves KK Warslut), each contributor writes under a pseudonym … KK took great offense to [their articles], and posted the real names of both editors, and a picture, the home address, and personal phone number of the site’s founder in their rambling nonsense.

In other words, Keith d0xxed the site’s eds.

Finally, Stockhausen decries Keith’s misogynist response to Blair Hopkin’s review, but I would suggest that the lyrics to the song ‘Raped’ (from 2002’s Cold Steel … For An Iron Age) are relevant: 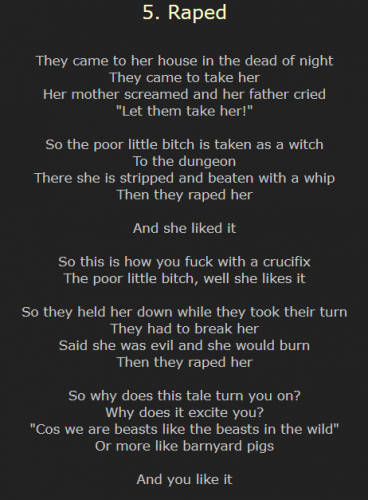 So too, his response to a question (Bardo Mythology) regarding the incident in Denmark:

[BM] KK once lived in Denmark for a few years, and I’m curious if this is where his resentment stems from. — On the contrary, he proclaims, of all the Scandinavians I’ve found Danes to be the least emasculated. Sweden on the other hand, I’d say is the first real matriarchal society we’ve seen in the West – famous also for their staggering rape statistics. How’s that working out for ya’s, ladies?