The ASF is pleased to announce a win for Shawn in his dispute with Northcote Social Club.

On Tuesday 18 October, during a Fair Work Australia conciliation meeting, Northcote Social Club backed down and agreed to pay Shawn compensation for his unfair dismissal. While Shawn is not at liberty to disclose the details of those discussions, nor the nature of the resolution, the ASF understands he is very happy with the result.

In light of what we previously knew, we understand this to mean that Shawn feels fully compensated regarding the pro rata long service leave entitlement he would have become eligible for this October had he not been illegally sacked from his role in July.

The ASF would like to thank all of those who helped by participating in the picketing of Corner Group’s four pubs:

This win would not have been achieved without the pressure exerted on Corner Group’s bosses by the ASF’s direct action methods.

For the time being, Shawn has requested that the ASF and all the people who supported him during this dispute refrain from taking any further action in his name against the company.

While the ASF will continue to support other underpaid workers from Northcote Social Club, we will be observing a 30 day hiatus of action in order not to jeopardise the agreement reached between Shawn and Corner Group.

Well done to all involved. And thank you for your support! 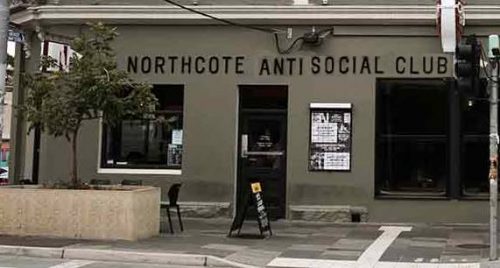 Apparently, the Northcote Social Club (301 High Street, Northcote), which is part of the Corner Group of venues (owners of The Corner Hotel and The National Hotel in Richmond and the Newtown Social Club in Sydney), has been screwing over some of its workers. The situation has been developing over some months and it seems that management has been intransigent in refusing to fulfill its obligations with regards at least one and possibly more workers. This is disappointing as the venues are very popular and generally well-regarded and myself and a shitload of people I know like to drink and perform there. In any case, as a consequence of management’s poor behaviour, a boycott of the Northcote has been initiated — until such time as The Corner Group agrees to do what’s right. Hopefully, this is soon, as a failure to do so will permanently scar the venue’s reputation among locals, especially unionists and music-lovers.

The Anarcho-Syndicalist Federation (ASF) is calling upon patrons, bands, booking agents to boycott Northcote Social Club (NSC) to support Shawn, in a case of wrongful dismissal.

After reviewing the facts associated with this case, the ASF is of the opinion Shawn’s dismissal was engineered by NSC management to avoid becoming liable to pay Shawn pro rata long-service leave to which he was 3 months short of becoming entitled to under Section 58(1) and (2) of the Long Service Leave Act 1992 (Vic.).

Five of Shawn’s fellow workers at NSC have since resigned in protest at his treatment. The ASF also believes that NSC has been illegally underpaying its employees for the last 7 years, by using their annual leave entitlements to pay certain public holidays in contravention of Fair Work Act 2009 (Cth), Sections 114–116.

We note the cynical hypocrisy of these actions in a pub whose branding seeks to cultivate an image of working class values.

The ASF requests your assistance in boycotting NSC until these grievances are addressed.

Furthermore we encourage the boycott of all CUB products in solidarity with the CUB55 (incidentally CUB is the Northcote Social Club’s main supplier).

You can’t quench a hard earned thirst with a cold, scab beer, especially not at the NSC!

For more information and to keep up-to-date with the ongoing campaign, please see : Boycott the Northcote Social Club.

I live in Melbourne, Australia. I like anarchy. I don't like nazis. I enjoy eating pizza and drinking beer. I barrack for the greatest football team on Earth: Collingwood Magpies. The 2023 premiership's a cakewalk for the good old Collingwood.
View all posts by @ndy →
This entry was posted in Music, That's Capitalism! and tagged ASF-IWA, Boycott the Northcote Social Club, CUB55, Newtown Social Club, Northcote Social Club, The Corner Group, The Corner Hotel, The National Hotel. Bookmark the permalink.