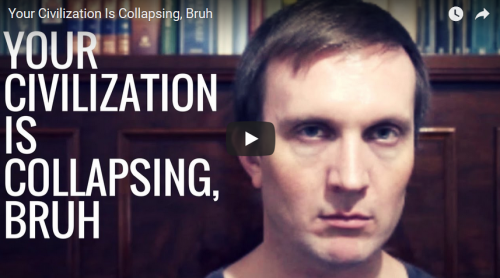 Back in July, The Spectator (Australia) published two articles by a writer known as ‘Moses Apostaticus’. After he was identified as elsewhere espousing anti-Semitic conspiracy theories, the articles were deleted, and the incident slipped down The Memory Hole (more-or-less, see : Rowan Dean, The Spectator, & anti-Semitism, July 14, 2017). Thankfully, you can still find Apostaticus’s (other) writings on Tucker Carlson’s site The Daily Caller and Adam Piggott’s site XYZ, read his magnum opus Civilizationism online, or receive a terrific education via his YouTube channel.

Rob’s academic output is exactly the type of derivative, noxious bilge you see across the social sciences today. His papers include such significant and empirical topics as ‘Robots, rape, and representation’, ‘Queerin’ the PGD clinic: human enhancement and the future of bodily diversity’ and ‘Robots and respect: assessing the case against Autonomous Weapons Systems’. That first one is about whether it’s ethical or not to rape a robot. Seriously. Your tax dollars hard at work.

And Rob, only pretentious dicks still use the Oxford comma. Get over yourself.

Rob’s is the pierced and sallow face behind violent anarchist propagandist Andy Fleming, an online persona who writes hatespeech for the slackbastard blog. He writes regularly encouraging the university-age footsoldiers of Antifa to commit violence against anyone who disagrees with their neo-Marxist orthodoxy.

The close links between the slackbastard blog and Jeff Sparrow are not difficult to find. Slackbastard posted to Facebook the article attacking me, The Spectator and Mark Latham almost immediately upon it being published. Pretty sloppy fellas, even for Antifa.

Note that the erroneous claim that I’m Rob Sparrow dates back to the end of 2015/beginning of 2016, and was first advanced by Neil Erikson on the one hand and the Australia First Party on the other. (See : Review : 2015 : Neil Erikson ~vs~ Rob Sparrow, January 2, 2016; you can listen to Rob being interviewed by myself and my ‘The SUWA Show’ co-host Cam Smith here.)

In any event, while I’m not Rob, ‘Moses Apostaticus’ is in fact an ex-high school teacher from Queensland called David Hilton (b.1979), who abandoned teaching history a few years ago to return to study for a PhD. (Or to put it another way: ‘Moses Apostaticus is a PhD student with a background in classics, history and literature. His years in education have made him a lifelong enemy of leftism’.) Thus before he was ‘Moses’, David was also known as @MisterHistory on Twitter (July 2009–April 2015), but despite having academic ambitions, poor old David doesn’t seem to have any great love for academics. Thus in ‘Academics: Smug High Priests of the Establisment [sic]’ (XYZ, May 5, 2017), he states:

Academic training is not training in wisdom, insight or even superior understanding of the problems of the human condition. It may have once been, but that was long ago. Academic disciplines today are training in the use of language as a weapon, as a means of social control. In ancient Greece, such fake intellectuals were called sophists. They are practiced at making the big seem small and the long seem short, but they know nothing. They are empty vessels.

They’re also not very smart. They are good with words to an extent, but even then the cronyism and careerism in academe these days selects for the most sycophantic, conformist and ruthless rather than the dedicated and brilliant. Many of them are rather dim. The only smart academics you’ll find in universities either come from outside the world of academe and have made careers in their fields first, or else are working in fields like medicine which require proven performance as a professional in the domain. Anything with ‘Studies’ after it is basically just cultural Marxist bulls—t.

Whether or not David regards his supervisor as being another empty-headed crackademic fulla cultural Marxist bulls–t is of course anyone’s guess.

Finally, it’s worth noting that, along with former Labor Party leader Mark Latham, sitting MP George Christensen and fellow XYZ contributors Adam Piggott and Ryan Fletcher, David has been a guest on neo-Nazi podcast ‘The Convict Report’; the talking-points he promotes are standard AltRight fare, concentrating upon the pernicious influence of (((Cultural Marxists))) on the education system in particular but also society as a whole, and otherwise developing a strand of fascist thinking dating back to Julius Evola. 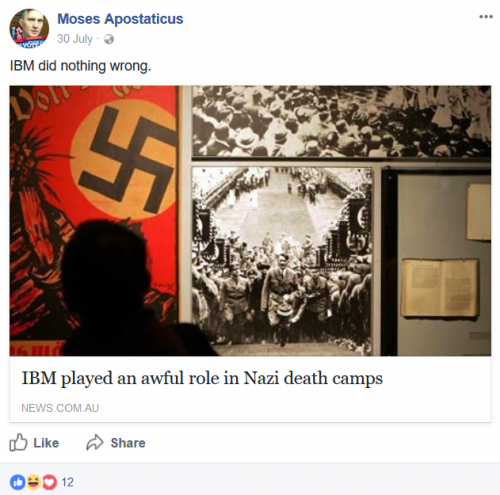 See also : How the Alt-Right Trolled Triple J to Advance Their Agenda, Royce Kurmelovs and Rebecca Kamm, Vice, Aug 17 2017 (‘A few hours after the segment, a contributor to the far right site XYZ, writing under the name Moses Apostaticus, published a story titled: Triple J Rejects Multiculturalism, Embraces Alt-Right. Apostaticus, who runs the site RestoringAustralia.net, has a significant online presence.’) | ‘Dr Goebbels’ mastheads’: on antisemitism and News Corp, Jeff Sparrow, Overland, July 13, 2017 | Dialectic of Counter-Enlightenment: The Frankfurt School as Scapegoat of the Lunatic Fringe (Martin Jay), March 9, 2012 | Clinton Hits Alt-Right, While Old-School Rightbloggers Play ‘Real Racist’ With Kaepernick, Roy Edroso, Village Voice, August 29, 2016 (‘Tucker Carlson’s Daily Caller ran an essay by some guy calling himself, I swear to God, “Moses Apostaticus” (I understand his real name is Biggus Dickus but his wife Incontinentia made him use a pseudonym) who advertised himself as “a PhD Candidate (Education) at a major Australian university and…a known voice in the alt-right sphere.” Dickus went on at length about how Hillary was, like, old and a “Cultural Marxist” and the alt-right is the new hip thing.’).

11 Responses to Who is Moses Apostaticus?