What Chip Le Grand gets wrogn about the Australian ‘alt-right’

On the weekend The Australian published an article by Chip Le Grand titled ‘Inside Australia’s own fractious alt-right’ (September 9, 2017) in which the ‘alt-right’ (which is left undefined) is represented by the dynamic duo of Blair Cottrell and Neil Erikson. The pair, along with Chris Shortis, were earlier in the week convicted of inciting hatred for Muslims; all three were at one stage members of the ‘United Patriots Front’ (UPF). The article is interesting but incomplete and what follows is my attempt to flesh out some of Le Grand’s account.

As Blair Cottrell tells Inquirer, “If you dress up as a brownshirt you are setting yourself up to be laughed at.’’ 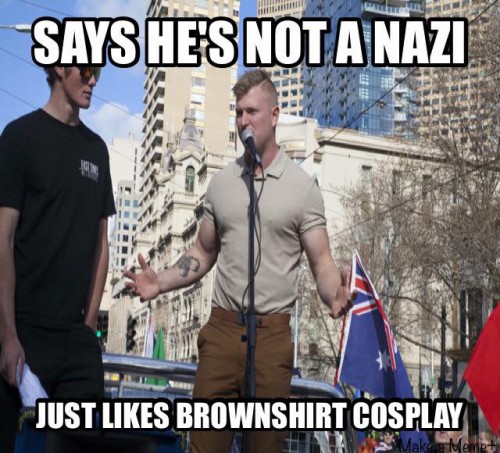 Cottrell first emerged into the public spotlight at the Reclaim Australia rally in Melbourne on April 4, 2015. On that occasion he gave a brief speech, accompanied by his cousin Christopher and several other members of neo-Nazi grouplet Nationalist Alternative (NAlt). The grouplet emerged during the course of anti-mosque activism in Williamstown several years ago, and until recently met under the auspices of the English-Speaking Union of Victoria at its headquarters in Toorak Road, South Yarra. The leader of the group, Mark Hootsen, was exposed as such by fellow member Neil Erikson in mid- to late-2014 following a dispute between the pair.

Cottrell’s political views may be established by reference to his online commentary, on sites like Facebook and YouTube. I documented these views from May 2015, when he announced the formation of the ‘National Democratic Party of Australia’:

There’s another kid on the fascist bloc: the ‘National Democratic Party of Australia’ (which is neither national, democratic nor a party). The group had a rather inauspicious beginning, ripping off a WA design company (and the WA RSL) to produce NDP agitprop. A convinced racialist, its chief spokesperson, Blair Cottrell, has some association with the Australia First Party and Nationalist Alternative, both of which had a presence on April 4 and are also committed to returning on July 18/19.

Not surprisingly, the Australian version of the German NDP constituted a mere blip on the political radar, and Cottrell soon moved on to the United Patriots Front, “a coalition of neo-Nazis, fundamentalist Christians belonging to the Rise Up Australia Party (RUAP), and a handful of semi-pro Islamophobes”. His views were more exhaustively documented in Quotations From Chairman Blair Cottrell (July 27, 2015). As I noted at the time, “The content below is sourced from comments by Blair Cottrell (AKA ‘National Democratic Party of Australia’), Melbourne organiser and spokesperson for the United Patriots Front, on Facebook, YouTube and Google. Almost all of the comments have since been deleted as part of Cottrell’s efforts to erase his neo-Nazi political commitments.” Some of this content was later reported in ‘Blair Cottrell, rising anti-Islam movement leader, wanted Hitler in the classroom’ (Michael Bachelard, Luke McMahon, The Sydney Morning Herald, October 17, 2015).

In other words, Cottrell’s anxiety not to be portrayed as a neo-Nazi is both rational — being known as a neo-Nazi is the political kiss of death — and commonplace — most neo-Nazis lie and dissemble about their political commitments and Cottrell is no exception. Finally, it’s worth noting that his former kamerad Shermon Burgess claims that, when he met Cottrell for the first time in Melbourne in May 2015, Cottrell had a copy of Mein Kampf in his ute, and when asked why he travelled with a copy of Mister Hitler’s book, referred to it as ‘The White Man’s Bible’. In any event, even if Le Grand chooses to ignore it, there’s certainly no shortage of evidence of Cottrell’s neo-Nazi views.

There are certainly Nazis on the fringes of Australia’s underground alt-right. Neil Erikson, one of Cottrell’s co-accused, used to be one, although he has in recent years disavowed them. He dismisses the emergence of Australia’s newest neo-Nazi group, the Antipodean Resistance, as uni kids playing dress-ups on Twitter and describes his own renunciation of National Socialism as a case of growing up.

“I used to admire Adolf Hitler years ago but since then I have woken up and seen a different side to it. I used to think that all Jews were evil. Now I see that the racist stuff comes from the left. I used to be anti-Israel, now I’m pro-Israel. You can’t be a nationalist and be against Israel.’’ He once accused Cottrell of being a Nazi. He now says he’s not. “There are Nazis out there but they are clowns,’’ he says. “We all think they are clowns.’’

By his own admission, Erikson became a ‘Nazi’ as a teenybopper; he first renounced ‘Nazis’ and ‘Nazism’, however, after he and his kamerad Shermon Burgess left the UPF in late 2015, precisely on the basis that the UPF was considered by them to be irredeemably ‘Nazi’. As well as being a member of NAlt, Erikson was also a ‘Crazy White Boy’, a short-lived gang of boneheads whose main claim to fame was the attempted murder of Vietnamese student Minh Duong in Ascot Vale in June 2012. In December 2012, several nazi yoof were convicted of the crime, which is worth recalling in some detail:

Wayne O’Brien, aged 20, and Shannon Hudson, now 21, committed a deplorable and unforgiveable attack on their smaller victim who they jumped as he was walking home alone from a Moonee Ponds 7/Eleven store where he worked.

The victim, a 21-year-old Vietnamese international student, was listening to music on his iPhone when attacked unawares on June 27 this year.

During the ferocious 10-minute bashing he was called names including a “yellow dog”, but Supreme Court judge Justice Betty King today said the bashing robbery was only partially racially motivated.

The victim was punched in the face and, after toppling over a garden fence, was pinned down and punched and kicked.

After he handed over his phone, O’Brien and Hudson dragged him down and bashed him again.

“He was terrified and believed he was going to be beaten to death,” Justice King said in sentencing.

The victim was dragged by his legs into the street and punched and kicked some more, and was also stabbed with a sharp weapon.

“Eventually (he) lost consciousness and lay in the gutter,” Justice King said.

“Despite that, it would appear that the assault continued.”

In what the judge described as a “particularly chilling episode of violence”, Hudson picked up a loose brick from the ground and, after raising it above his head in both hands, brought it down on the man’s head.

“The brick itself broke in half,” Justice King said.

The victim was left lying unconscious and shirtless in a pool of blood.

According to Erikson, after the assault his ‘Boys’ asked him to help dispose of Duong’s body. Whether they did or not (Erikson states that he declined their invitation), it’s curious that Le Grand avoids connecting Cottrell and Erikson to NAlt, and Erikson to the Boys. Of course, Le Grand also avoids reference to the ‘Aryan Nations’ (AN) in Perth. According to Erikson, when the UPF travelled to Perth to attend a rally in November 2015, they stayed with fellow UPF (Perth) member Melony Jane Attwood. Attwood, along with fellow neo-Nazis Robert Wayne Edhouse and Corey Joshua Dymock, are currently on trial for the murder of Alan Taylor, bashed to death with a hammer as he slept at his Girrawheen home in April 2016: barely six months after Attwood/Taylor hosted Cottrell and Erikson (and Cottrell’s sidekick, Li’l Tommy Sewell) at her home in Perth.

In summary, while choosing to focus upon Cottrell and Erikson as the most familiar faces on the ‘alt-right’ in Australia makes a degree of sense, for unknown reasons the fact that both men have emerged from the neo-Nazi milieu is significantly downplayed.

Finally, a few brief notes on some other aspects of Le Grand’s reportage:

• On Facebook kicking the UPF and others off the platform, see : antifa notes (may 10, 2017) : United Patriots Front kicked off Facebook &c. Note that for a brief period the UPF spawned another page titled ‘UPF Media’, which also claimed at one point the title of ‘Alt Right Australia’;
• The nü neo-Nazi grouplet ‘Antipodean Resistance’ — ‘a group that openly proclaims its adherence to National Socialism’ (ie, Nazism) — was spawned by the UPF and NAlt. Formed last year and inspired by the (now-banned) UK group ‘National Action’, members of the group attended various rallies organised by the True Blue Crew and UPF in Melbourne, including the anti-leftist/anti-Muslim/anti-immigrant rally in Coburg in May 2016 and the ‘Blue Lives Matter’ counter-protest in the CBD (along with a superbly-disguised Blair Cottrell) in July 2016. 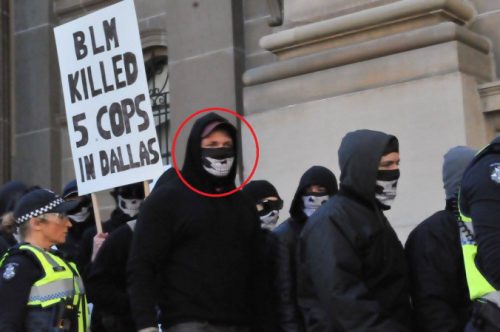 There is, of course, a lot more to say about AR — and last week the media embarked on a publicity campaign on behalf of the boys — but that will come in good time;
• Finally, the alt-right’s favourite Australian Jew, Avi Yemini, is indeed organising a rally next weekend in Melbourne. While his attempt at organising hate rallies in Melbourne in December 2016 and in Sydney in August 2017 were not entirely successful, for its part the ‘Campaign Against Racism & Fascism’ has organised a counter-protest ‘From Charlottesville to Melbourne: Unite to fight the far right’.