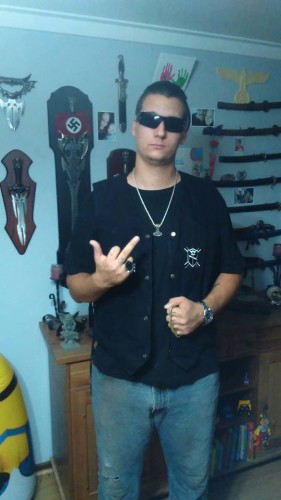 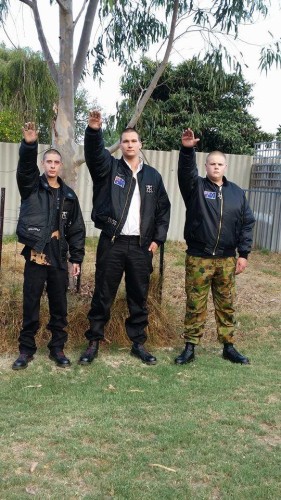 Above : Edhouse and two teenage nazis

ABC reported today that Robert Edhouse, President of the tiny neo-Nazi grouplet ‘Aryan Nations’ (Perth), has been arrested and charged with murder.

Four people have been charged with murdering a man in the northern Perth suburb of Girrawheen, with a 17-year-old boy making a brief appearance in Perth Children’s Court in connection with the alleged attack.

The body of Alan George Taylor, 42, was found beside his home in Arnos Way on April 22.

Police said the fly-in, fly-out worker died from serious injuries suffered in an assault with an unknown weapon.

The boy was the first to be charged with the murder and appeared in Perth Children’s Court on Tuesday morning.

He was not required to enter a plea and was remanded in custody to face court again next month.

Corey Joshua Dymock, 19, and Robert Wayne Edhouse, 20, were not required to enter a plea and were both remanded in custody to face Stirling Gardens Magistrates Court later this month.

A 35-year-old woman also charged with the murder is yet to face court.

Mr Taylor lived at the property with his partner and three-year-old son, among others.

It appears possible that the others charged with murder — Dymock (19), a juvenile, and an unknown woman — are also associated with the Aryan Nations.

Edhouse first made contact with me back in November 2014, asking me to help promote his nu group: I wasn’t very interested.

Fast forward to early 2016, and Edhouse got his wish for publicity by appearing as a spokesperson for AN in WA media. Prior to this, in January, Edhouse messaged me to complain that anti-fascists failed to disrupt a United Patriots Front rally in Perth (which AN attended). The links between the AN and UPF are — or were — close but informal: allegedly, the UPF were housed by AN member Melony Jane Taylor when they travelled to Perth in order to attend a UPF rally last year. In any case, the UPF draws from the same right-wing swamp as AN does (or did). Certainly, Edhouse and AN keep up-to-date with the antics of the Australia First Party, whose leader, Dr Jim Saleam, also entertained Edhouse on one of his trips to Sydney (just as he did the UPF leadership when they were also in Sydney late last year).

Above : Saleam, unknown nazi, Edhouse (@ The Bunker in Tempe) 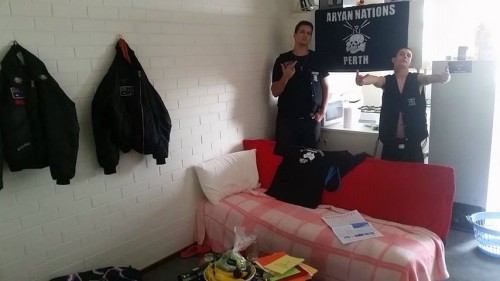 Above : Edhouse and fellow nazi (copy of AFP newsletter ‘Audacity’ on couch)

As for Edhouse’s partner(?) Melony Jayne Taylor, she makes her own political convictions pretty apparent: 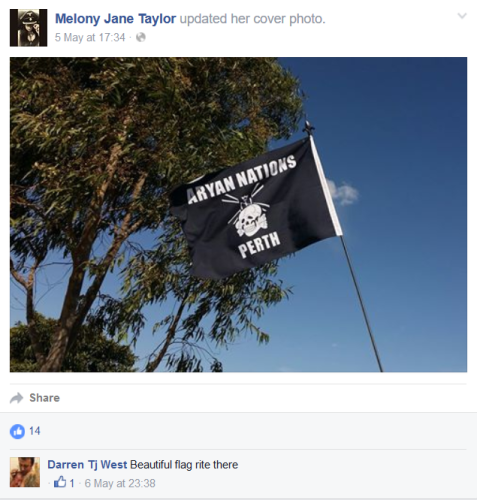