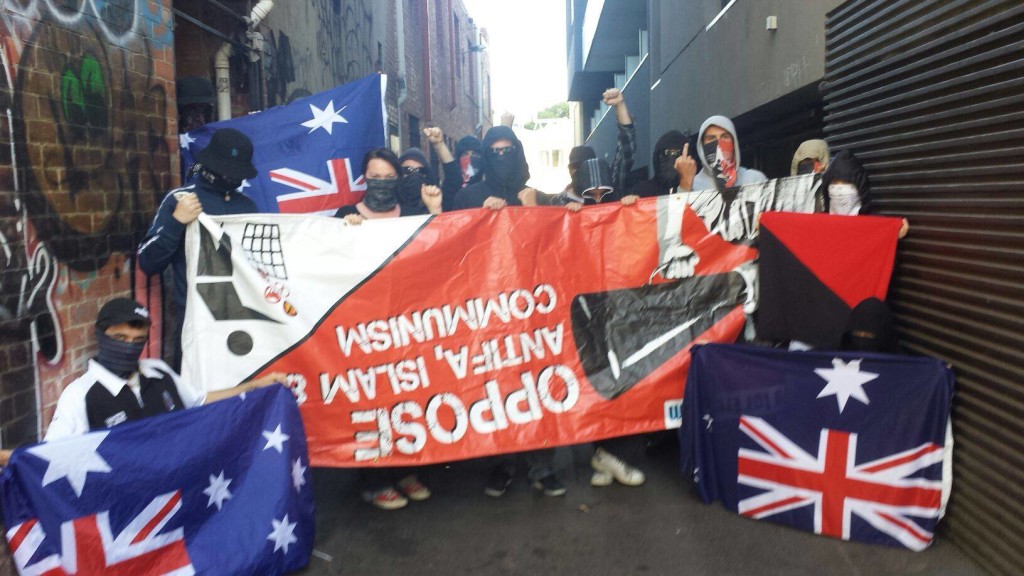 On Saturday, May 28, racist boofheads from a nü patriotik grouplet called the ‘True Blue Crew’ (TBC) have organised a counter-rally in the suburb of Coburg in Melbourne. On that date, Sue Bolton of the Socialist Alliance has organised a rally titled ‘Moreland says NO to Racism’:

WHEN : 11am, Saturday, May 28
WHERE : Gather outside Coburg Library, Victoria St Mall. Then march to Bridges Reserve, Bell St, Coburg for community speakout and entertainment. Bring your lunch and join with other Moreland residents in saying our community supports a diverse and inclusive Moreland.

The rally has been endorsed by a dizzying array of groups, including:

As for the TBC, they’ve given their counter-rally the rather grandiose title of ‘Stop the Far Left! – Rally Supporting the Australian Governments Use of the Offshore Detention Centers That Protect Our Nation’, further whining that: 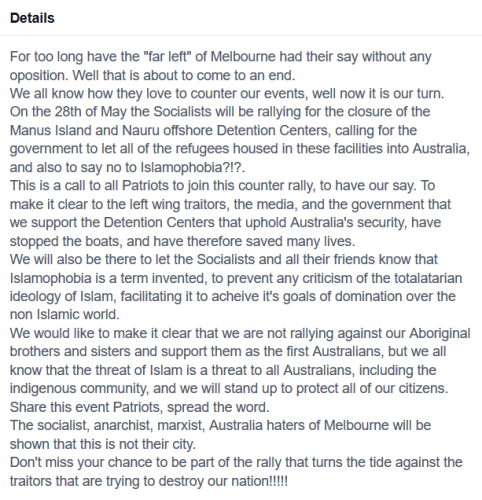 So, basically, a rally against ‘Teh Left’. Note that the TBC is (currently) asking their supporters to assemble at Bridges Reserve at 10.30am — half an hour before the ‘Moreland says NO to Racism’ rally is scheduled to begin (at 11am at Coburg Library) and at the end-point of the march.

Joining the TBC will be the UPF, whose very first public rally in Richmond (May 31, 2015) targeted another socialist councilor, Stephen Jolly. Jolly was also the subject of a bizarre letter-writing campaign by the UPF in which followers were implored to write the Governor-General, Peter Cosgrove, requesting that he remove Jolly from office.

Obviously, neither the UPF rally nor the batshit letter-writing campaign met with any success; the possibility of a UPF member standing against Jolly for election was not an option, it seems, and remains a distant possibility given the failure of ‘Fortitude’, the UPF’s stillborn political party, to obtain the requisite number of members to register with the AEC. Indeed, times are tough for the UPF, with a number of departures from the grouplet in recent months and just a few supporters in Melbourne, Bendigo and Perth (and a handful of other locations). Dennis Huts, the leader (along with flunkey Kevin Coombes/’Elijah Jacobson’) of the UPF in Perth, has been spending his time harassing queer yoof (see : Perth fascists target teens, The Perth Voice, April 29, 2016). In any case, the UPF’s fuehrer, Blair Cottrell, remains determined to become Chancellor, so the UPF can be expected to trundle along for a while yet, latching on to the TBC in this case, the anti-Muslim mob in Narre Warren previously, and performing occasional stunts for the media.

As for the TBC, a few of its boofheaded faces (Zane Chapman, Corey Hadow) popped up at the July 18 Reclaim Australia/UPF rally in Melbourne, in Melton on November 22, and were in amongst it again at the UPF rally in Bendigo on February 27 this year. (In Bendigo, the TBC waved Australian flags, wore Australian underpants and capes, and made a puny attempt to break police lines in order to attack the small counter-protest outside Bendigo railway station. You can watch video of the minor incident here.) Most of the TBC boys seem to be from Bendigo and Melton, and could be considered a (slightly) more grown-up version of the ‘Southern Cross Soldiers’. Well, sorta. They’ll be joined by the UPF on May 28, presumably along with most of the rest of the fascist mileu in Melbourne (Nationalist Alternative, PDLA, et. al.), Victoria and even interstate.

Finally, it’s been a while since the far right elected to hold a public rally in the northern suburbs of Melbourne. About 20 years, in fact, during the period in the late 1980s through to the mid- to late-1990s, when neo-Nazi grouplet National Action and various other boneheads held rallies and even established a bunker in Fawkner. See : Anti-fascism in Melbourne: 1990s (March 20, 2007). psyberimp writes: “We have driven Nazis out of Moreland on several occasions. We embarrassed them in Brunswick. Before they were hoarded onto a city bound train, a crowd of thousands chased about a dozen boneheads, including their fuehrer Michael Brander, down Dawson St where they took refuge in a warehouse.”

Still, when all’s said and done … 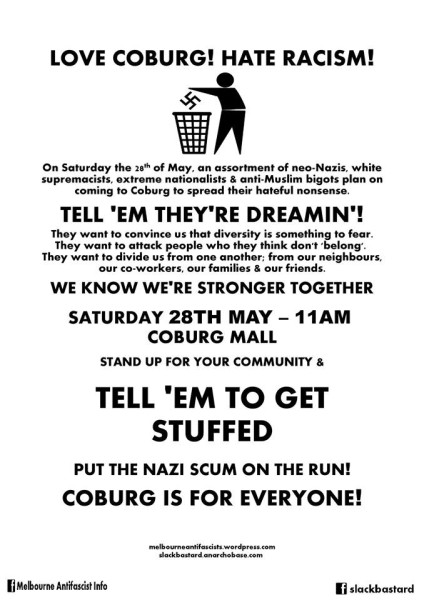 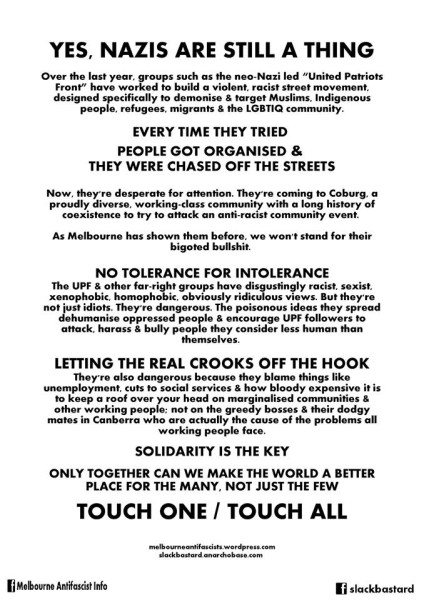 A PDF of the above can be downloaded here.

I live in Melbourne, Australia. I like anarchy. I don't like nazis. I enjoy eating pizza and drinking beer. I barrack for the greatest football team on Earth: Collingwood Magpies. The 2021 premiership's a cakewalk for the good old Collingwood.
View all posts by @ndy →
This entry was posted in Anti-fascism, History, State / Politics, That's Capitalism!, Trot Guide, War on Terror and tagged “...And That’s Why We Should Keep The Bloody Flag The Same!”, Blair Cottrell, Coburg, Corey Hadow, Elijah Jacobson, Kevin Coombes, Moreland says NO to Racism, National Action, Socialist Alliance, Southern Cross Soldiers, Stephen Jolly, Stop the Far Left! - Rally Supporting the Australian Governments Use of the Offshore Detention Centers That Protect Our Nation, Sue Bolton, True Blue Crew, United Patriots Front, Zane Chapman. Bookmark the permalink.