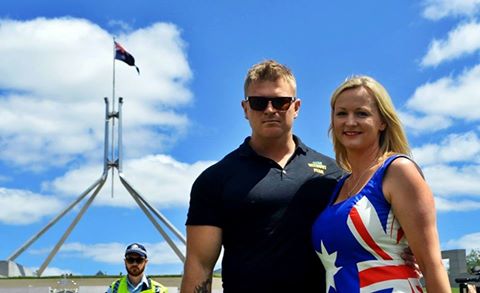 On Saturday February 6 a number of nationalist, patriotic and religious groups held a rally in Canberra outside Parliament House in order to ‘Save Australia’ from Islam and refugees. The February 6 rally was the local manifestation of a global ‘day of action’ organised under the auspices of PEGIDA. Among those who attended were Reclaim Australia (or what remains of it), Rise Up Australia Party (RUAP), United Patriots Front (UPF)/Fortitude and an array of smaller, principally Facebook projects (‘Aussie Brotherhood’ etc.). Supporters were bused in from Adelaide, Brisbane, Melbourne, Newcastle, Sydney and various regional centres. Estimates of attendance vary from 200 (ABC) to 250 (Canberra Times) to 4-500. A very small group of 30-40 held a counter-rally. See : Reclaim Australia Rally drowns out counter protesters, Georgina Connery, The Canberra Times, February 6, 2016.

PEGIDA rallies were held in around a dozen European cities on February 6, including Amsterdam, Birmingham, Dublin and Prague. In Amsterdam, antifa successfully managed to sabotage the demonstration and the fascists were put on city buses and driven out of town after 40 minutes. There were multiple clashes with police and multiple smaller clashes in the area between fascists and anti-fascists. Antifa F-side AFC Ajax football hools were present, as were NVU members (The Dutch Peoples-Union (Dutch: Nederlandse Volks-Uniewere), Blood and Honour and neo-Nazis from Belgium, Germany (Dresden) and Poland. See : Tegen Pegida, voor, F-side, politie, February 6, 2016. In Birmingham, a very small crowd assembled to hear former English Defence League leader Stephen Yaxley-Lennon (‘Tommy Robinson’) talk shit, while in Dublin the crazy baldheads (Polish neo-Nazis) got chased out of town. In Prague, neo-Nazis attacked the Klinika social centre following the rally. See : Klinika Collective’s Statement After Saturday’s Neo-Nazi Attack in Prague, René Schuijlenburg, Revolution News, February 8, 2016.

Over the course of the last two days two former members of the UPF/Fortitude — Shermon Burgess and Neil Erikson — have published several videos on Facebook denouncing the UPF for being a neo-Nazi group.

Prior to their denunciation of the group, the boys were described as follows:

They are now described in far less flattering terms.

In essence, what happened was the following:

Yesterday, Burgess (‘The Great Aussie Patriot’) published a video (which since appears to have been deleted) in which he denounced the neo-Nazi blog ‘Whitelaw Towers’ (whose principal author is the Sydney-based neo-Nazi Peter Campbell, and which promotes the Australia First Party), Dr Jim Saleam’s ‘Australia First Party’ (AFP), another blog (and Facebook page) titled ‘Anti-Antifa Australia’ (the responsibility of Brisbane-based neo-Nazi skinhead and Volkfront leader Chris Smith) and finally Mark Hootsen‘s Melbourne-based neo-Nazi groupuscule ‘Nationalist Alternative’ (NAlt). Because the UPF has encouraged and facilitated the participation of neo-Nazis and White supremacists in the UPF and the ‘patriotic’ movement more generally, Burgess also denounced the UPF.

Soon after Burgess published his denunciation, he was joined by Erikson. In several subsequent videos, Erikson has stated that when he joined the Reclaim Australia protest in Melbourne in April last year, he identified as a neo-Nazi and joined Reclaim on that basis. He further states that Blair Cottrell is a neo-Nazi (as is Cottrell’s sidekick, Thomas Sewell), that he facilitated Cottrell’s entrance into the Reclaim movement, and that both did so ‘undercover’, ie, by lying about their neo-Nazi political convictions. (See : Neo-Nazis @ #ReclaimAustralia in Melbourne, April 5, 2015.) In ‘coming out’, then, Erikson has abandoned his cover, while Cottrell — now the undisputed heavyweight champion of the UPF and of Fortitude — continues to run around with his pants on fire.

None of this is news to anyone who pays attention to such matters (see : Quotations From Chairman Blair Cottrell, July 27, 2015), but it’s always interesting to listen to patriotik Volk when they decide to be honest for once. Thus Erikson also claims that money raised via an UPF gofundme campaign (administered by a former flunky named ‘Indie Rose Oliver’) was what paid for the UPF’s plane trip to Perth in November; that when he was a member of NAlt, he attended meetings of the group in Toorak (at which Cottrell was also present); that the flags which the UPF waved at the May 31 ‘anti-Communist’ rally in Richmond were paid for by NALt; that NAlt were present at both UPF rallies (August 29 and October 10) in Bendigo; and that at the second Bendigo rally there were several scuffles between NAlt and its supporters and those who objected to their presence.

It’s unclear exactly what triggered the outbursts by Burgess and Erikson (though Erikson maintains it was because the UPF wrongly accused Burgess of stealing money from them), but both claim that the involvement of neo-Nazis such as the UPF in the ‘patriot’ movement is bound to be its undoing. I’m not so sure: ie, that would be the case if the UPF was honest and declared itself to be a neo-Nazi group, but of course it isn’t honest and for precisely that reason: even the thickest of patriots are unlikely to follow a neo-Nazi into battle. In which case, the UPF will simply continue to engage in denial. On the other hand, the facts do place the ostensibly non-nazi members in a bit of a pickle.

Currently, the UPF/Fortitude is structured as a tiny micro-sect, with Cottrell as fuehrer and the handful of other members — Scott Moerland in Brisbane, Dennis Huts and Elijah Jacobson in Perth, and Kriso Richardson, Thomas Sewell and Christopher Shortis in Melbourne — performing as his faithful lapdogs. Huts and Jacobson are part of a tiny neo-Nazi and White supremacist milieu in Perth (see below), while Moerland (a former RUAP candidate) and Shortis are Christian fundamentalists (Richardson appears to be a garden-variety racist meathead, happy to tag along, take orders, and occasionally — falsely — claim to be a member of the CFMEU). Its following is small but generally quite fanatical, and happy to believe whatever it’s told.

In summary then, what seems to be happening is a further entrenchment of a split in the patriotik movement between AFP, NAlt, UPF and RUAP (ie, neo-Nazis, White nationalists and fundamentalist Christians) on the one hand and the Australian Defence League (ie, Ralph Cerminara), the Party For Freedom (Nick Folkes & Co in Sydney) and assorted other fascist dregs on the other hand, united by a shared hatred of Muslims, refugees and Teh Left. Each party being driven by political opportunism, it remains possible that there will be a rapprochement of some kind, but the cracks do appear to be beginning to widen. 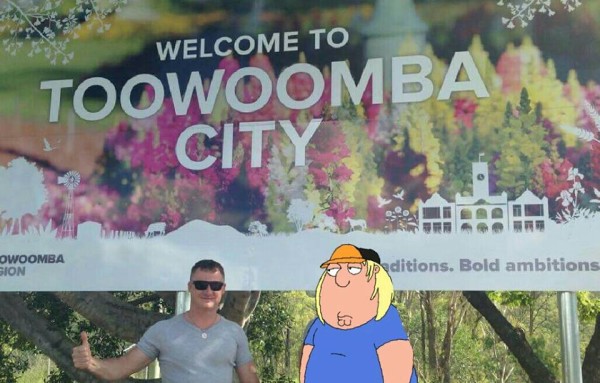 As for the UPF, it’s holding a Little Nuremberg rally in Toowoomba on Saturday at the Toowoomba Indoor Bowls Hall at 10 Annand Street. (The UPF claim that the owner of the business is a UPF supporter.) Otherwise, local UPF supporter Liz Carlsen is arranging their visit to the town, ie, when she’s not busy working for local Catholics as a relief teacher(!). The rally on Saturday is the first of three the UPF is conducting, with another in Orange, NSW on February 20 and a third in Bendigo on February 27. 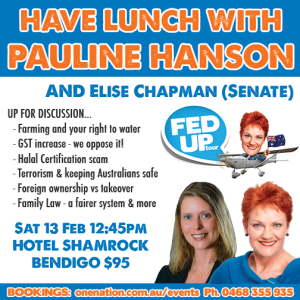 Pauline Hanson is bringing her batshit roadshow to Bendigo on Saturday and has won the support of The Shamrock Hotel in doing so. While the Hotel is rolling out the red carpet for her and her running mate (and Bendigo councilor) Elise Chapman, a welcoming committee has formed in order to ensure that their vile message does not go unopposed. See : Bendigo: Stop One Nation Senate Launch. 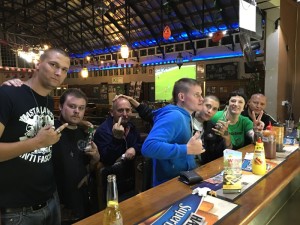 WA Today published a story on February 9 about a newly-established neo-Nazi group in Perth called ‘Aryan Nations’. See : Aryan Nations: Perth white supremacist group on letterbox recruitment drive, Brendan Foster, February 9, 2016. AN’s main propagandist is a jung fella by the name of Robert Edhouse (aka Matthew Collins). Over the course of the last year or two Robert has been periodically bugging me to write about him and his group. Most recently he messaged me to state the following: 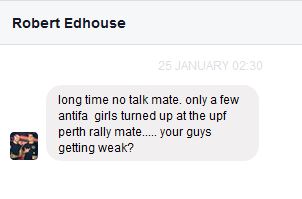 A brief perusal of his Facebook profiles reveals that Robert is well-acquainted with the UPF in Perth, being friends with both Huts and Jacobson and even Neil Erikson. Seemingly consisting of no more than a handful of boneheads, the AN in Perth is an outgrowth of AN in the US, which Edhouse has visited, and to an OMC in the US and Aotearoa/New Zealand called Sadistic Souls. See also : Squabbling Aryan Nations Factions Descend Into Vicious Name-Calling, Bill Morlin, SPLC, January 27, 2014.

Local neo-Nazi and Reclaim Australia and UPF supporter Phil Galea was in court again today. His batshit rant about Muslims outside court was captured by Channel Ten. Stay staunch, brother! Note that UPF supporter John Wilkinson (‘Farma John’ on Facebook) purchased 20-something tasers a few months ago, presumably for use upon anti-fascist counter-protesters. Wilkinson was in Canberra on February 6, but who knows where the tasers have ended up …