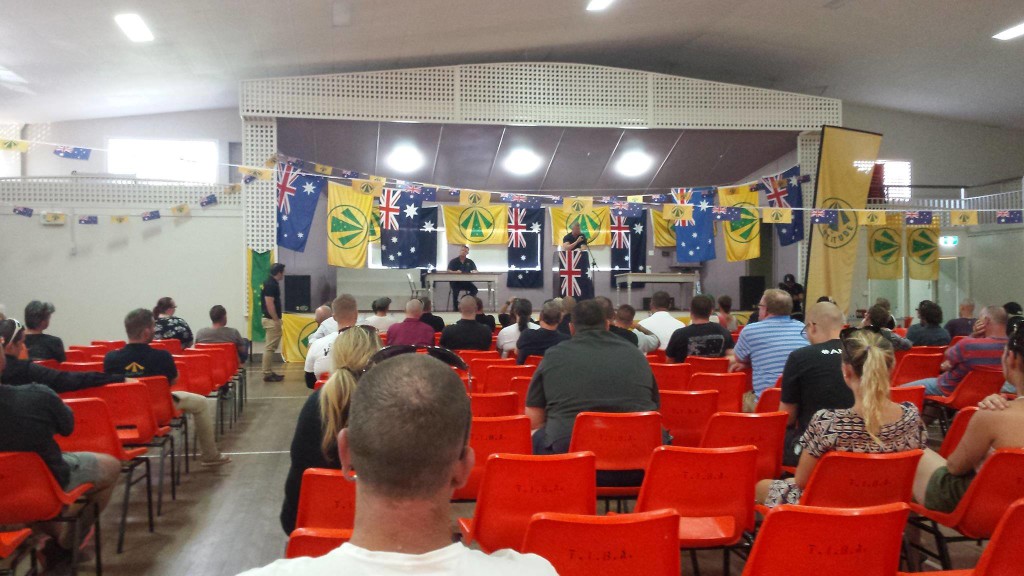 The United Patriots Front (UPF) held a meeting in Toowoomba yesterday at the Toowoomba Indoor Bowls Hall, the official launch of their political party ‘Fortitude’. From the one photo which has been published of the event, it appears that around 40 or 50 individuals attended –meaning that they were almost certainly outnumbered by the number of flags the UPF used for the occasion.

To celebrate their triumph, the UPF retired to the Burke & Wills Hotel. The manager of the pub later appeared in a video published by the UPF, stating: Hi guys I’m Nathan I’m at the Burke & Wills Hotel. I’ve just had a phone call — ah, an email — from head office, who is reporting having seen on Facebook, from a David Foster I do believe it was, that there was a group of neo-Nazis coming to my hotel here. I have responded, informing my reception staff to email back to head office, letting them know, that the 20-odd people that have come in for in meals and drinks tonight, are the leadership and members of Australia’s newest political party.

Leaving aside the fact that Fortitude is yet to register, Nathan may like to read a little bit more about UPF fuehrer Blair Cottrell, the Holocaust denialist who congratulates him on his support for the party. See, for example, Blair Cottrell, rising anti-Islam movement leader, wanted Hitler in the classroom, Michael Bachelard and Luke McMahon, The Sydney Morning Herald, October 16, 2015 and Quotations From Chairman Cottrell (July 27, 2015).

(The UPF is holding another meeting in Orange on February 20.)

Otherwise, former UPF member Neil Erikson continues to denounce the UPF as a (neo-)Nazi organisation and has vowed to continue to reveal ‘secrets’ about the UPF and other nazi meatheads for as long as they continue to dis him. Ho hum. There’s not a great deal of new information in the claims that he’s published thus far, though it was interesting to note that Cottrell’s association with and involvement in Melbourne-based neo-Nazi groupuscule Nationalist Alternative (NAlt) extends back some years (he appeared in their company at the April 4 Reclaim Australia rally in Melbourne). Further, that as Reclaim Australia was emerging last year Cottrell agreed with Erikson that explicit reference to The Jewish Problem was a Bad idea, and should be left to a later date when ‘patriots’ would be more likely to be able to share their anti-Semitic and neo-Nazi political convictions. 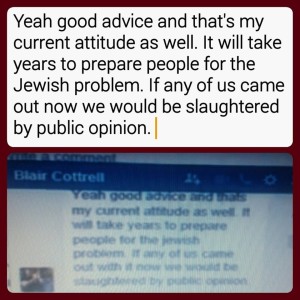 Neil Erikson : Yeah sick! Yeah mate I’m surprised I guess it’s cause of abbot [sic] and the siege but it’s bigger people have had enough of pc shit! My personal opinion is stick to the Muslim shit and Cultural Marxism for max support do Jews later you don’t need to show your full hand.
Blair Cottrell : Yeah good advice and that[‘]s my current attitude as well[.] It will take years to prepare people for the Jewish problem. If any of us came out with it now we would be slaughtered by public opinion.

What is somewhat disturbing is his claim that Cottrell has threatened to kill him(!): A lot of people are asking me why I’m trying to destroy Blair Cottrell. Well Blair Cottrell called me up in a fit of fucking rage, threatened to run through my house and kill me in front of my family. Given that Cottrell apparently has a criminal conviction for an arson attack upon the home of a person who previously crossed him, one can only hope that Cottrell was just very upset and has no real intention to commit murder. 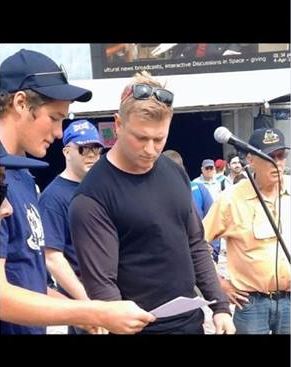 Erikson also claims that the reason NAlt fuehrer, Mark Hootsen, was removed from his position as moderator of the Stormfront Downunder forum was because he had been found to have sent sexually graphic material to a teenage supporter. See also : Nationalist Alternative throw their former Führer under the bus #antifa (December 14, 2014).

Also on Saturday, Pauline Hanson’s One Nation Party held a meeting in Bendigo at The Shamrock Hotel. The small group who assembled to hear her and the party’s Victorian Senate candidate (and Bendigo councillor) Elise Chapman were also treated to a small demonstration by opponents. Chapman’s comrades in the UPF will be returning to town on February 27. A welcoming committee has been formed to oppose them then, too: MARCH AGAINST FASCISM AND BIGOTRY. 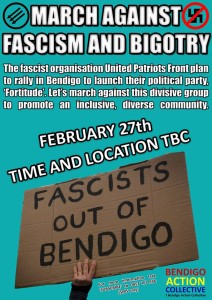