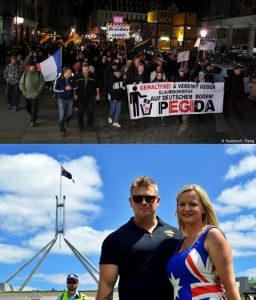 On this week’s episode of Yeah Nah, we talk to Sabine Volk [Twitter] about PEGIDA (‘Patriotic Europeans against the Islamization of the Occident’) and right-wing populism in Europe. Sabine is a doctoral fellow of the Centre for the Analysis of the Radical Right (CARR) and a member of the Working Group on Memory and Populism associated with the Memory Studies Association (MSA), and has recently published:

NB. The podcast version of the episode contains a longer discussion with Sabine.

I live in Melbourne, Australia. I like anarchy. I don't like nazis. I enjoy eating pizza and drinking beer. I barrack for the greatest football team on Earth: Collingwood Magpies. The 2021 premiership's a cakewalk for the good old Collingwood.
View all posts by @ndy →
This entry was posted in Anti-fascism, History, Media, State / Politics, That's Capitalism!, War on Terror and tagged 3CR, PEGIDA, populism, Sabine Volk, Yeah Nah Pasaran. Bookmark the permalink.