A note on the Proud Boys in Australia

[Update (February 11, 2021) : TLDR : In Albury-Wodonga, Jarrad Searby and a few other Boys paid a visit to some fella’s workplace and another fella’s home. Searby was mAd because they made Facebook comments he didn’t like. Neither were ‘antifa’. See : Australian Proud Boys filmed threatening critics at a business and a home, Michael McGowan, The Guardian, February 11, 2021 | Australian Proud Boys on the hunt for social media commenters and the elderly, Tom Tanuki, Independent Australia, February 12, 2021 | See also : proud-boy fascists make idiots of themselves in rural Australia, Yeah Nah, Teh YouTubes, February 10, 2021.]

From The Department of Interesting Developments:

TORONTO (AP) — The Canadian government designated the Proud Boys group as a terrorist entity on Wednesday, noting they played a pivotal role in the insurrection at the U.S. Capitol on Jan. 6.

The Proud Boys have faced increased scrutiny after seizing on the former Trump administration’s policies and the group was a major agitator during earlier protests and the Capitol riot on Jan. 6. The Proud Boys is a far-right, male chauvinist extremist group known for engaging in violent clashes at political rallies. Canada is the first country to designate them as a terrorist entity … 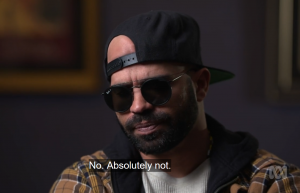 Presumably, this may constitute a critical piece of evidence in any future prosecution of Tarrio and his flunkeys, though I’ve been reliably informed that investigative and prosecutorial authorities in Washington may well have other tricks up their sleeves.

In Australia, the Proud Boys (PBs) also have a smol presence, claiming members in every state and territory. The Australian PB franchise was established not long after its North American cousin (2016–), just as the English Defence League (EDL) rapidly spawned an Australian Defence League (ADL). Two of the principal ADL activists were Shermon Burgess and Ralph Cerminara. Burgess later went on to help found first ‘Reclaim Australia’ then the ‘United Patriots Front’ (UPF) in 2015, before leaving the UPF after a fellow patriot made him cry and — eventually — deciding to Go Full Nazi. Of the pair, Cerminara was the more madcap, but after a criminal conviction for assault in 2019, he’s changed his name and gone a bit quiet.

As of December 2016, the ADL was a moribund institution, and remains so in April 2019. While Burgess has gone on to embrace neo-Nazism, Flat Earth theory, Odinism, and whichever other crackpottery registers in his fevered bRanes, Cerminara has been in serious trouble with the law, and earlier this year was sentenced to jail for assaulting a neighbour. In good news for Cerminara, he was released on appeal, and — irony of ironies — has apparently successfully applied for legal support from the Aboriginal Legal Service in NSW to aid in his efforts to free himself from the politically-correct courts. (Note that there remains at least one ADL page on Facebook (https://www.facebook.com/pg/AustralianDefenceLeagueOfficialAdlEst2009), one of thousands of similar pages pumping out an endless stream of anti-Muslim propaganda. Oddly, while three admins are based in Australia, two are in the UK and one in the US.)

On January 26 this year, a dozen or so PBs in Melbourne joined the plague rats in St Kilda to celebrate the founding of the British penal colony, though at least one PB — Andrew Paton — apparently failed to get the memo, and instead elected to remain in the city to troll the Invasion Day rally.

For his efforts, Paton was detained by police, and also lost his hat. 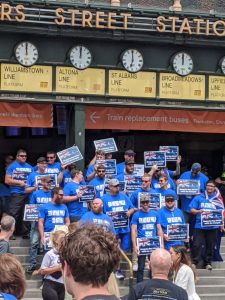 In 2020, a larger group of PBs attempted to troll the rally by assembling at Flinders Street station wearing merch inscribed with the slogan ‘Governor Arthur Phillip did nothing wrong’. Curiously, after having posed for photos, the PBs departed Flinders before the arrival of the march; certainly, it’s worth recalling that, in 2017, Canadian authorities were more than happy to readmit five PBs into the armed forces after they disrupted and were then ‘suspended after they crashed a 1 July protest in Halifax, Nova Scotia marking Canada’s history of atrocities against [I]ndigenous people’. Given that Tarrio was also recently charged with incinerating a ‘Black Lives Matter’ banner torn from a black church in Washington, it’s little wonder patriotik Aussie men are drawn to the PBs. “The conduct of the Proud Boys in Washington, DC on December 12, 2020, amounted to a new and dangerous chapter in the long and terrible history of white supremacist mob violence targeting Black houses of worship,” the church said in its filing.

Locally, in 2019 PBs also had a presence at various events organised by bankrupt former Senator and White supremacist Fraser ‘Final Solution’ Anning. Along with the dregs of Reclaim and the ‘True Blue Crew’, Tom Sewell and his neo-Nazi Lads, PBs thus attended Anning’s anti-African rally, again in St Kilda, along with a (very eggy) meeting in Moorabbin. 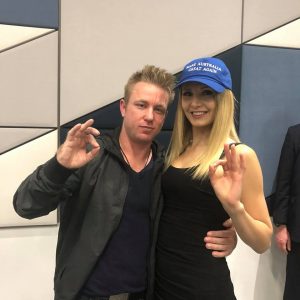 Sometime lvl boss of PBs Australia, Nick Stone, was of course thrilled to pose with Sky News Australia’s Lauren ‘The Great Replacement’ Southern during her tour Down Under in 2018, and tour organiser Dave Pellowe, along with fellow Christian fun-da-mentalist Lyle Shelton, were also Proud to pose with PBs in Brisbane. 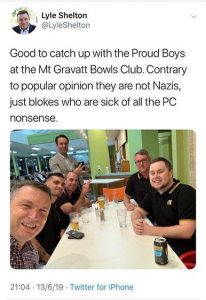 Of course, one of the central tensions on the far-right is The JQ. So, while The Lads Pellowe hired to help safely conduct The Great Replacement’s 2018 tour have now openly and quite publicly proclaimed themselves to be neo-Nazis, the PBs typically equivocate on the subject. Hence, in the final episode of ‘The Cuckables’ — a joint effort by Timmeh! Wilms of ‘The Unhinged’ blog and semi-pro antisemites David Hiscox and Matthew Roebuck of XYZ blog — recent PB recruit Jarrad Searby confessed to never having heard of The JQ; a sad state-of-affairs which Hiscox and Roebuck both promised to quickly remedy. 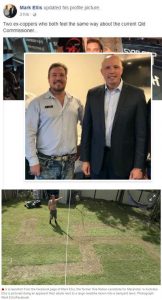 Finally, the decision by the Canadian government to label the PBs a ‘terrorist’ organisation will presumably enter into and have some impact upon the government inquiry into ‘extremism’ announced last year by Mr Potato Head. So too the fact that the fourth level of initiation into the gang requires a member to shed blood for the cause: The final step involves “a major fight for the cause,” McInnes said. “You get beat up, kick the crap out of an antifa” and possibly get arrested.

Still … the same parliament that initially voted in favour of Pauline Hanson’s motion that #IOKTBW has today butchered a(nother), Labor motion, inter alia removing a passage condemning Craig Kelly and George Christensen for spreading conspiracy theories, and extending criticism of ‘extremism’ to Maoist guerillas hiding in the Dandenongs, Adelaide’s Brigate Rosse, and bloggers like me. 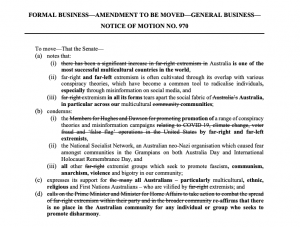 5 Responses to A note on the Proud Boys in Australia