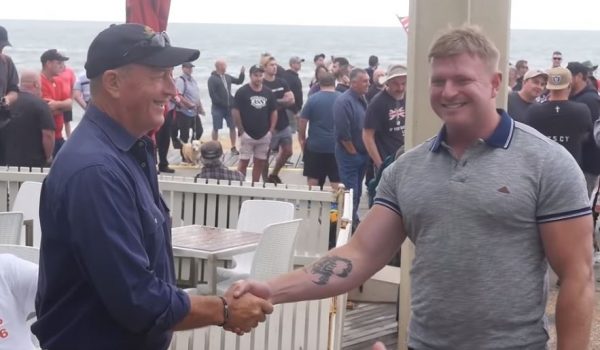 [Update (January 8, 2019) : Rather than compose another post, I thought I’d update this one with some more infos arising from Saturday’s hate-rally. The first segment concerns police deployment of capsicum spray and use of rubber pellets; the second, the employment by NITV and SBS of neo-Nazi Blair Cottrell on the renovations to their centre at Federation Square in Melbourne.]

Among all the media reportage on events at St Kilda on Saturday, one thing that caught my eye was the following (St Kilda beach rally: far-right and anti-racism groups face off in Melbourne, Lisa Martin, The Guardian, January 6, 2019):

In one heated confrontation a rightwing protester broke through police lines and tried to grab a banner from three anti-racism campaigners.

It caught my attention partly on account of what others related to me about the incident. This is their account:

The incident occurred when the anti-racist contingent went out on to the road at Beaconsfield Parade and the fascists were on the embankment leading up to The Esplanade. A few of the fascists started running down the hill and Beaconsfield Parade. At this point, most of the remaining fascists followed them, and the main contingent of the anti-racist rally did as well. This meant that the police followed the main groups (and the fastest-moving parts of those groups) down the road. This left the back of the anti-racist rally completely exposed to both the slower-moving fascists and the ones staying on the embankment. 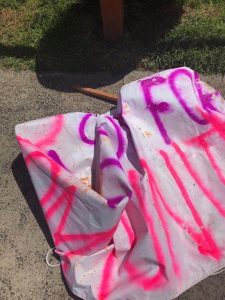 No one was injured from whatever was shot (pepper-ball pellets or rubber pellets) and no-one was marked with dye. However, the OC spray was quite severe. Two women required medical treatment (the pepper spray was mainly levelled against the defensive position of the anti-racists). They were decontaminated on the side of Beaconsfield Parade, initially by other anti-racists, and eventually by paramedics. Those who had just been attacked by the fascists, and then by police, were left exposed as their injuries were treated and as fascists walked past, filmed them, mocked them, and called the women ‘bitches’ and ‘scum’.

We all believe that the police deployed their new weapons, as well as the usual OC spray, and then immediately left the area, without accounting for their behaviour.

According to a source, neo-Nazi Blair Cottrell, in addition to leading the hate-rally in St Kilda on Saturday, has been working as a sub-contractor on the renovations to the building in Federation Square which houses SBS and NITV. As of (very) recently, he’s been re-deployed elsewhere, but was working at the site throughout the Christmas period, in December and January: the precise date on which he commenced working there is unclear.

Cottrell is on the record as advocating the execution of ‘leftist’ media workers. In November 2015, he — along with Neil Erikson, Chris Shortis, Linden Watson and Andrew Wallis — staged a brief occupation of community radio station 3CR. While there, they took notes on staff and stole photographs (and, it seems possible, other d0x).

On that basis, it seems reasonable to conclude that, during the weeks he spent working on site, African, Muslim and Indigenous staff members were potentially exposed to an unsafe work environment. Further, Cottrell has potentially had access to sensitive information; certainly, he’s had the opportunity to put faces to names, acquire detailed knowledge about access to and egress from the building, the comings and goings of particular staff members, and so on.

For the record, nobody much cared about the invasion of 3CR. It’s a small, community-based organisation, targeted on account of my involvement in hosting a radio show there. SBS and NITV, on the other hand, are large media organisations, with many employees and sizable budgets, so it’s possible that Cottrell’s employment there, and seemingly ready-access to its staff and layout, may prompt more serious reflection. At this stage, it remains unclear if the site was a union job, and who exactly was responsible for his employment in the first place. Thus, while members of his extended family run a company called ‘Cottrell Constructions’, via which he’s apparently obtained work, I dunno if this company or some other was contracted to undertake work at Federation Square.

[I’ve briefly revived the blog in order to write the following. I’m still gonna be taking a break in January, and unpublishing the facebook page. I may add to the post in the next few days as further infos comes to light.]

Aiming to capitalise upon media-driven panic over African youth crime, on Saturday, January 5, serial pest Neil Erikson joined with neo-Nazi Blair Cottrell to organise a racist rally at St Kilda Beach. While estimates vary, and numbers fluctuated during the course of the afternoon, somewhere around 150 people attended their rally, the great majority men and almost all white/’of Anglo appearance’. A larger crowd of perhaps 2-300 attended two anti-racist events on the same strip of beach: one a community picnic, and the other an anti-racist rally organised by the Campaign Against Racism & Fascism (CARF). Both the picnic and rally were scheduled to kick-off at midday, with Erikson and Cottrell’s event due to start at 1pm.

While scheduled to end at 4pm, as it happened the racist rally didn’t last that long and, after perhaps an hour or so of (no-doubt electrifying) speeches — including an address by Senator Fraser ‘Final Solution’ Anning — it abruptly ended. Those who’d assembled then turned their attention to the anti-racist contingent, which by this point had formed one grouping around the picnic, the CARF contingent having marched the very short distance from Catani Arch to join the picnickers. The next hour or two saw various attempts by the racist mob to break the police lines that had formed around the anti-racist contingent. While generally unsuccessful, the mob was free to roam around the police kettle, and continued to harass anti-racists, including when they attempted to leave the area. (For whatever reason, when CARF initially tried (unsuccessfully) to leave the area by crossing Beaconsfield Parade to the Esplanade, the anti-racist assembly was split in half, with the picnickers left behind, and only later being able to leave — either along the Parade, and eventually rejoining CARF — or by another route.) 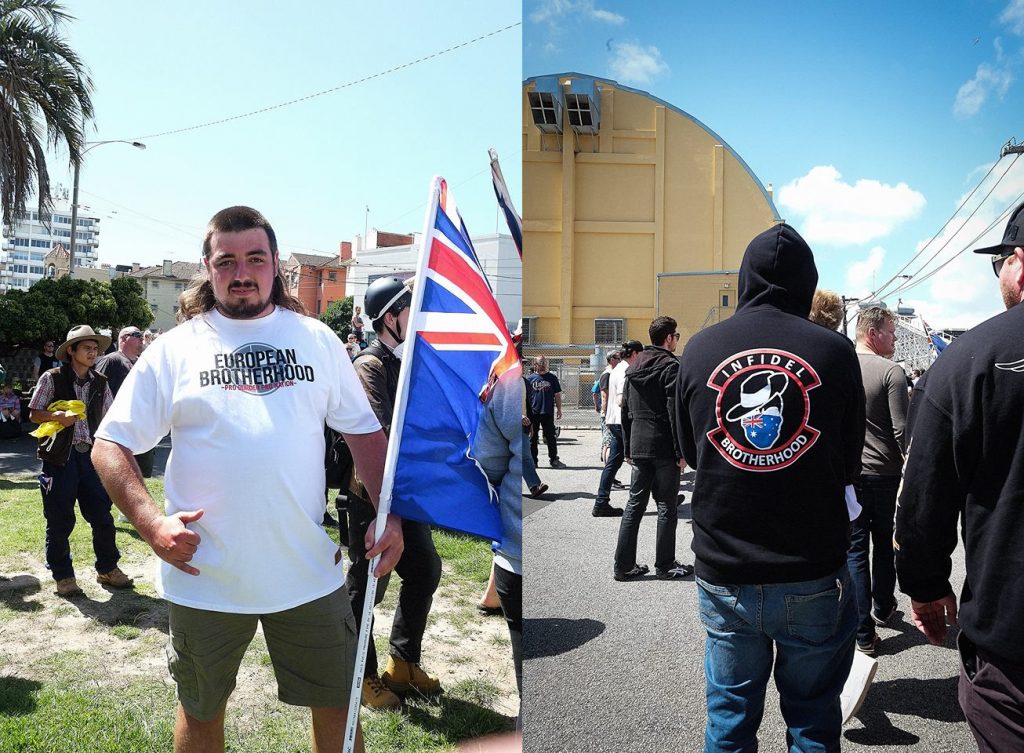 At various points during this protracted exit from the area, there were brief clashes involving the two sides. In this sense, policing of the event mirrored to some extent that witnessed at the Milo stoopid of December 2017. On that occasion, police were content to allow a small group of fascists to occupy the intersection outside the venue (Melbourne Pavilion) for several hours. On Saturday, the racist mob assembled on Beaconsfield Parade to taunt anti-racists. At one stage, during the (at first) static confrontation between the kettled anti-racists in the park and their loyal opposition (located between it and the road), Some Guy driving a sound system along the Parade paused alongside the racist mob, and two adventurous lads from within the crowd stole a generator from the vehicle. (I understand that they later abandoned the equipment, which was collected by police.) Or as the ABC reported: The conflict spilled onto the road when far-right demonstrators attacked a car which was carrying a loudspeaker broadcasting “Sudanese are welcome, racists are not”. 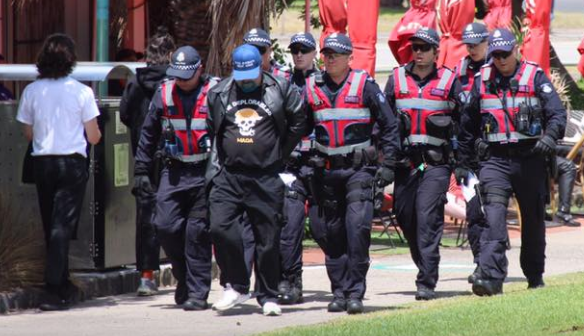 As the afternoon progressed, there were multiple opportunities for clashes between the two sides, and I’m mildly surprised nobody was seriously injured in these encounters: police reported just three arrests, possibly including that of Rino ‘Bluebeard’ Grgurovic (above). As media have noted, the police presence was massive on the day, with many hundreds mobilised for the occasion, including regular police, uniformed and plainclothes, dog and horse, PORT, undercover, community liaison and specialist media. They also had a helicopter — and a boat! 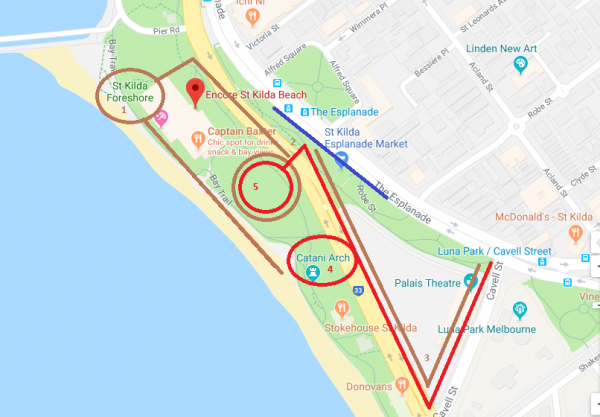 1) The racists assembled in the area outside Encore Restaurant near the car park. (It’s been reported that Erikson & Co were getting their drink on from relatively early on at the restaurant.)
2) The general area in which the racist assembly gathered on Beaconsfield Parade.
3) The brown lines indicate the movements of the racist mob during the course of the day, walking to the rally along the foreshore and trailing anti-racists as they left the picnic area, eventually reaching Luna Park; the blue line is where several hundred onlookers gawped at the spectacle from the Esplanade.
4) CARF assembly point.
5) Community picnic.

In terms of who attended, many were known faces and/or drawn from the various groups which have sprung up in Melbourne in the last few years. So Cottrell and Erikson were joined by former United Patriots Front supporters, Kane Miller and the True Blue Crew, Jason Moore and a handful of Soldiers of Odin, half-a-dozen Proud Boys, Tom Sewell and members of The Lads Society from Melbourne and Sydney (and possibly elsewhere), including its Sydney organisers Alex Annenkov and Mark McDonald (the latter of which was the chief organiser of defunct neo-Nazi grouplet ‘Squadron 88’), and so on. Most were not flying colours on the day, however, and most who attended would seem to have been drawn from the wider white nationalist, anti-African and anti-Muslim milieu, the principal platform for which is facebook. Sewell and The Lads arrived a bit late in the piece, and at first appeared to want to march through the anti-racist crowd, but eventually decided not to. Their arrival did, however, appear to be the trigger for the racist rally as a whole to begin to move to surround the anti-racist picnic and attempt to find ways around police lines to attack. 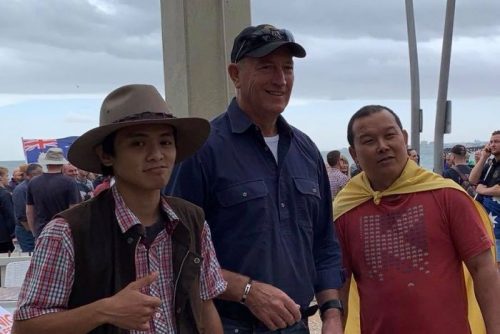 • Senator Fraser Anning’s attendance at the racist rally has been noted. Laughably claiming that the nazi contingent was leftists-in-disguise, his trip was, according to the Senator, official business (ie, The Taxpayer footed the bill for his expedition to St Kilda), and in solidarity with the Vietnamese community. One of the fellas pictured above does a very good line in racist rhetoric directed at African-Australians, and promoted the event on facebook by way of terming it ‘Romper Stomper 2.0’, seemingly (and presumably blissfully) unaware that the 1992 film pitted boneheads against Vietnamese-Australian workers. 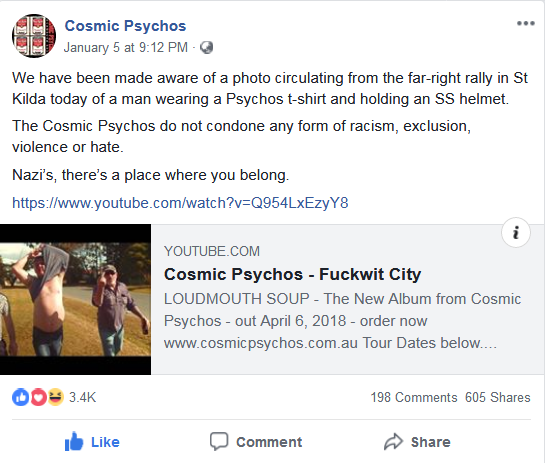 • One racist meathead in attendance at the rally sported an SS helmet and a Cosmic Psychos tee. The Cosmic Psychos issued a statement in response to the meathead’s use of their merch. Note that the dickhead was pictured in the company of Kane Miller, the lvl boss of the TBC: Miller and the TBC have worked in close collaboration with nazis for several years now. 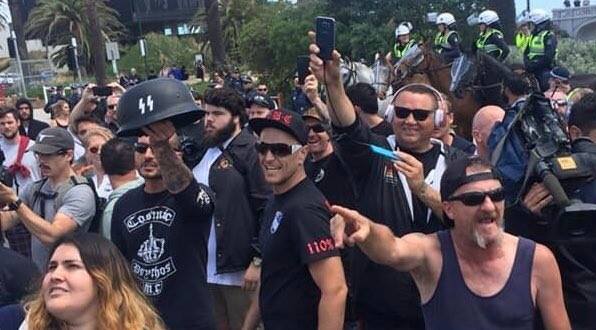 • The anti-racist and anti-fascist contingent was on the whole poorly-coordinated. At best, this is a good opportunity for those involved to reflect upon what happened, and think about ways in which to improve upon Saturday’s outing. In this context, I’d suggest that, inter alia, a better understanding of the nature of the opposition is required, as is having a very clear idea of what the purpose of attendance is, along with movement within, to and from the event and the area as a whole. In other words, it’s not just a matter of rocking up, but having an exit strategy. That said, there was relatively little time to prepare for the event, it only being announced about a week prior to its occurrence, so there was always going to be some limitations.

• On the whole, I think that the far right had a good day on Saturday. Able to roam about with relative ease, being much more mobile and appearing to be both more able and willing to engage with the enemy, was certainly an advantage. As a result, I’d be very surprised if they don’t take advantage of the relative momentum generated by the event, and will be organising similar events in the near future.

(January 8, 2019) : Fascists Rallying over a Fallacy: Nazi Sentiment Seen as Acceptable by Some, Sydney Criminal Lawyers.